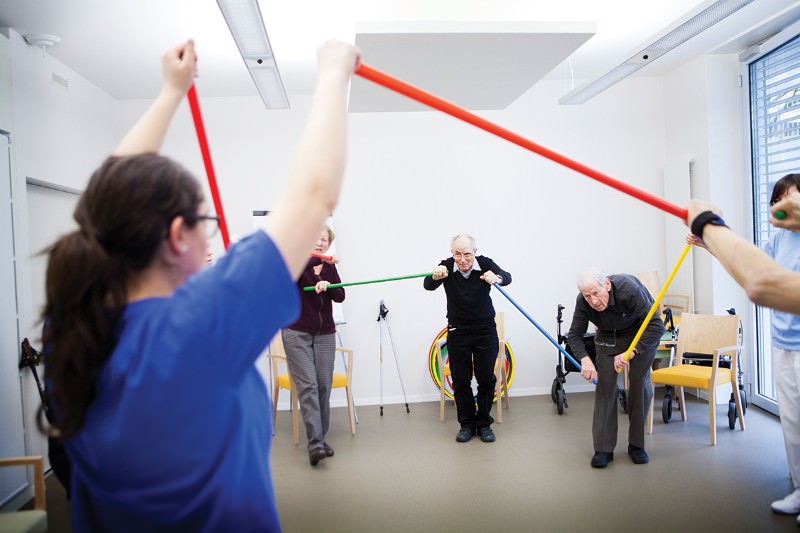 This is very promising and the mere fact that physiological changes are also associated with the drug mitigates against any placebo effect at work.  Better is the fact that all subjects saw improvement and serious improvement at that.

Now we appear to be doing a blanket double blind program on all related types of problems as well as clear Parkinson's.  This should teach us a lot.

I am particularly happy to see the reversal of the protein accumulation taking place.  Working around such problems is acceptable but removal is always far superior.

Recall also that the problem took years to develop and may well take years to undo as well.
.
People with Parkinson’s walk again after promising drug trial

A cancer drug may be the first treatment to reverse Parkinson's disease, and has allowed bedridden people in a small trial to walk again

IT IS the first drug that seems to directly target the causes of Parkinson’s disease. People taking part in a safety trial have had their symptoms reversed, allowing them to talk, get out of bed and feed themselves once again. Although there are already several treatments for the symptoms of Parkinson’s, this could be the first to provide substantial, lasting relief.

“We’ve seen patients at end stages of the disease coming back to life,” says Charbel Moussa of Georgetown University Medical Center in Washington DC, who led the trial.

Moussa thinks nilotinib can free up these lysosomes, which he calls the brain’s “garbage disposal system”, to do a better job of clearing out the accumulation of proteins in the brain that is associated with Parkinson’s disease. It is this build-up of proteins that is thought to trigger the death of brain cells that make the molecules like dopamine needed for movement and other functions.

Tests in animals showed promise, so Moussa, his colleague Fernando Pagan and their team set up a small trial of 12 volunteers with Parkinson’s disease or a similar condition called dementia with Lewy bodies. The trial was designed to test only the safety of the drug, which was given as a daily oral dose for six months.

All the volunteers were at an advanced stage of disease at the start of the trial. Three of them were unable to speak, and were enrolled in the study by relatives with power of attorney.

But once they started taking the drug, all the volunteers began to improve, some just three weeks later. One woman who was barely able to move her limbs at the start managed to feed herself after five months of treatment.

“We had people as stiff as a board at the start of the study who were walking around, sitting down and bending their legs by the end,” says Moussa. “You could see the elation on their faces when they saw the improvement. There wasn’t a dry eye in the room.”

Alan Hoffman, who first showed signs of Parkinson’s in 1997, says the nilotinib trial changed his life (see “Winding back the years“). Previously unable to get out of bed without help, within weeks of beginning the trial he was able to make the bed himself, and read a book for the first time in years.

Pagan compares the improvements to those in neurologist Oliver Sacks’s book Awakenings – subsequently made into a film – in which he described helping people who had been paralysed for decades by sleeping sickness to move, walk and speak fluently again.

“They were more fluent in speech, and had a lot more energy,” says Pagan. All three participants who were unable to speak had begun talking again by the end of the trial. “It was like an awakening for them,” says Pagan.


“They were brighter and more fluent in speech. It was like an awakening for them”

Some volunteers found their drastic improvements to be too challenging, says Pagan. One woman dropped out of the trial because her husband struggled to cope with her new-found energy, he says. “When a person is not able to verbalise, it’s actually easier to look after them,” he says. “Once this woman started to talk, she argued with her husband – it caused more of a caregiver burden.”

The drug was detectable in the cerebrospinal fluid of the participants, which shows that it makes it through the blood-brain barrier and into the brain. The team also monitored the tau, amyloid beta and alpha-synuclein proteins that accumulate as part of Parkinson’s disease, and found that the levels of these proteins either stabilised or fell in all participants. At the same time, dopamine levels increased. Those taking the highest dose of the drug showed the biggest changes.

Pagan presented the results on 17 October at the Neuroscience 2015 meeting in Chicago. By one measure, participants’ cognition improved by an average of around five points, on a scale of 30.

While nilotinib causes unpleasant side effects in people who take high doses of it for leukaemia, much lower doses were used in this trial and the team saw no unwanted effects.

Graham Kerr at Queensland University of Technology in Brisbane, Australia, says the results are striking. “The new treatment certainly appears to alleviate symptoms of Parkinson’s as well as cause reduction in biomarkers associated with disease progression,” he says.

The team thinks nilotinib is the first drug that can target the root cause of Parkinson’s disease and provide more than temporary relief. Other neurologists are excited by the results, but warn that no firm conclusions can be drawn until the drug has been tested in a larger trial with a control group taking a placebo.

“It seems too good to be true. I dearly hope I am wrong,” says Carl Clarke of Sandwell and West Birmingham Hospitals NHS Trust, UK.

There have been false dawns for Parkinson’s before. A compound thought to encourage the growth of new brain cells – GDNF – received a lot of interest after promising animal experiments, and evidence suggesting it worked in a small number of people. However, no one has yet managed to replicate the effects in larger, placebo-controlled clinical trials.

The placebo effect can make a huge difference to symptoms of Parkinson’s disease, says Arthur Roach, director of research at the charity Parkinson’s UK. “We can’t yet say that patients will benefit.” He says a person’s symptoms can also naturally vary by a large degree, for example at different times of day.

Moussa’s team is now enrolling people with a range of disorders that involve accumulating brain proteins, including Alzheimer’s disease and amyotrophic lateral sclerosis, for a larger, placebo-controlled trial.

Sadly, the effect of nilotinib doesn’t seem to last once people stop taking it, and when the trial ended, they started to deteriorate again, says Moussa. Many have since tried to get hold of the drug themselves, but it costs a whopping $10,000 a month.

“One woman sold her car to buy the drug for her husband,” says Moussa. Pagan is in discussions with manufacturer Novartis, hoping that the participants can be offered continued treatment at a reduced cost on a compassionate basis, through a procedure the company already uses to help people with cancer afford their medication. “We’ve been working on it for three months,” says Pagan, “and hope to have an answer soon.”
Posted by arclein at 12:00 AM