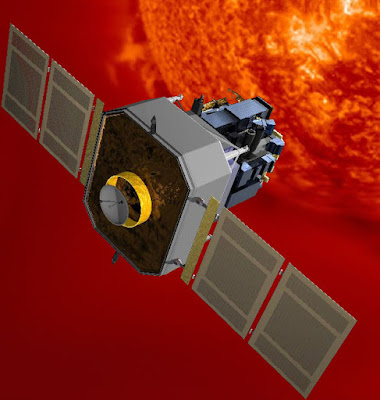 It turns out that we have exactly one crushed comet passaging the sun.   This is important.  Earth was massively impacted by a crushed comet directly onto the Northern Ice Cap around 12900 years ago.

Having only one prospect, it appears that we likely have our original comet in the Kreutz comet family observation.   We really have no other choice and since incoming at speed all  on much the same trajectory it appears this is it.

We already understand that the comet mass was perfectly targeted and timed to produce the necessary result which was to end the northern Ice Age.  Now we understand that when it passed by the sun, it came in low enough to effectively crush the whole comet.  This was well done and it resulted in most of the material impacting over a huge area as it hit the Ice Cap.

Some remnants made it over the Cap to fall on North America and the explosive energy hurled ice over the Eastern part.  The rest passed by in space to form the Kreutz family of comets

Oct 25, 2015: For an astronomer, discovering a comet can be the highlight of a lifetime.  Great comets carry the names of their discoverers into history.  Comet Halley, Comet Lovejoy, Comet Hale-Bopp are just a few examples….

Imagine the frustration, though, if every time you discovered a comet, it was rapidly destroyed.
Believe it or not, this is what happens almost every day to the most prolific comet hunter of all time.

The ESA/NASA Solar and Heliospheric Observatory has discovered more than 3000 doomed comets that have passed close to the sun. .
The Solar and Heliospheric Observatory, better known as “SOHO”, is a joint project of the European Space Agency, or ESA,  and NASA.  Orbiting the sun at 1.5 million km, or 932,000 miles from Earth, the distant observatory has just discovered its 3000th comet—more than any other spacecraft or astronomer.  And, just about all of SOHO’s comets have been destroyed.

"They just disintegrate every time we observe one," said Karl Battams, a solar scientist at the Naval Research Labs in Washington, D.C., who has been in charge of running the SOHO comet-sighting website since 2003. “SOHO sees comets that pass very close to the sun—and they just can’t stand the intense sunlight.”

The overwhelming majority of SOHO's comet discoveries belong to the Kreutz family. Kreutz sungrazers are fragments from the breakup of a single giant comet thousands of years ago. They get their name from 19th century German astronomer Heinrich Kreutz, who studied them in detail. On average, a new member of the Kreutz family is discovered every three days. Unfortunately for these small comets, their orbits swoop perilously close to the sun.

"There's only one Kreutz comet that made it around the sun – Comet Lovejoy. And we are pretty confident it fell apart a couple of weeks afterwards," says Battams.

But SOHO hasn’t reached this lofty perch alone.   The spacecraft relies on people who sift through its data. Anyone can help because SOHO’s images are freely available online in real time.  Many volunteer amateur astronomers scan the data on a daily basis for signs of a new comet. The result: 95% of SOHO comets have been found by citizen scientists.

Whenever someone spots a comet, they report it to Battams. He goes over the imagery to confirm the sighting and then submits it to the Central Bureau for Astronomical Telegrams, which gives it an official name.

And the name is…you guessed it. “SOHO.”

Naturally, it has already been destroyed.  SOHO doesn’t mind though.  The Greatest Comet Hunter Ever has already moved on to the next sungrazer.
“SOHO-4000,” anyone?
Posted by arclein at 12:00 AM