The Mind-Bending History Of Buddhism And Psychedelics 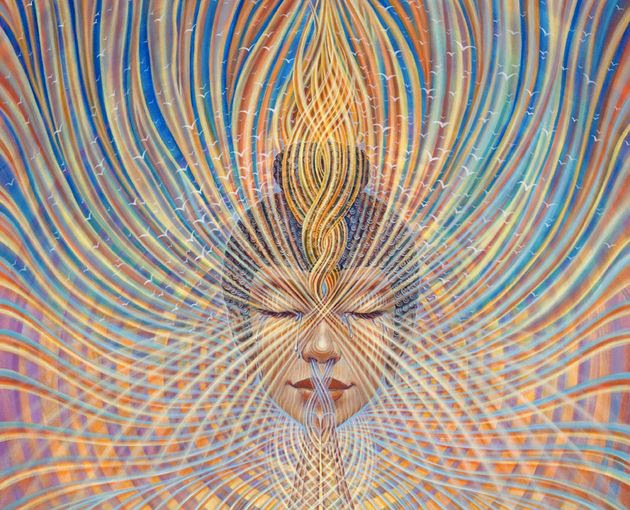 I do think that the two streams are revealing the same phenomena but one does it through a difficult form of discipline while the other merely unblocks the channels.  What is badly needed is a discipline using the drugs in conjunction with a learned teacher who has developed guidance protocols.

At the least, no such effort should be undertaken without first going through an hours meditation aimed at quieting the mind.  This avoids messing with a lot of baggage which hardly is conducive to progress.

Our principle objective is to learn to communicate with our independent soul or astral mind which manages our bodies and communicates with other light bodies out there in proper conjunction with our physical cognitive mind which is dependent of physical connectivity yet for the same reason imposes a form of will such as emotions and yes cravings.  A first step is to learn to observe those physical thoughts as expressed in the physical verbal language.  The light body communicates easiest through images that have meaning to your physical mind.

.
The Mind-Bending History Of Buddhism And Psychedelics

Do substances like LSD and psilocybin have a place in a dharma practice?

http://www.huffingtonpost.com/entry/zig-zag-zen_55c3c6f6e4b0d9b743db81d5
The history of Buddhism and of psychedelics in American culture follow a surprisingly similar trajectory from the 1950s through the present-day.

But perhaps this shouldn't come as a surprise, given that they share a common aim: the liberation of the mind.

Many of the thinkers who turned to Buddhism and other Eastern philosophies in the 1960s -- including Alan Watts, Jack Kerouac, Aldous Huxley, Allen Ginsberg and Ram Dass -- were influenced in some way by their experiences with LSD and other psychedelic drugs.

American Buddhist teacher Jack Kornfield said that LSD, "prepares the mind for Buddhism," while Allan Watts described both practices as being part of a comprehensive philosophical quest.

Now, more than 60 years later, we're seeing a resurgence of popular interest in Buddhism -- with mindfulness meditation now firmly entrenched in the cultural mainstream -- and also in psychedelics, which are being investigated as therapeutic agents for mental health issues including depression, anxiety and addiction.

The intersection of these practices raises a number of questions: Are psychedelics an obstruction to a Dharma practice, or a helpful accompaniment? Are mind-altering substances a legitimate means of personal transformation?

"In spiritual communities, we need an honest exploration of this delicate and sometimes taboo topic," Kornfield wrote in a blog post last year. "Let us approach the use of these drugs consciously."

In the essay collection Zig Zag Zen: Buddhism and Psychedelics (released in a new edition in May), a number of prominent thinkers in both disciplines come together to address these questions, and more.


I caught up with Allan Badiner, author, activist and editor of Zig Zag Zen, to learn more about the intersection of Buddhism and psychedelics, and to find out why both philosophies are more relevant today than ever. Here's what he had to say.

In a talk at the Rubin Museum, earlier this year, you said that Buddhism itself is psychedelic in its effect. What did you mean by that?

Buddhism has a quality that it shares with psychedelics, in the sense that it places great importance on the primacy of mind and on being in the present moment. The definition of psychedelic is mind-changing or mind-manifesting, and both buddhism and psychedelic substances share that in common.

How is Buddhism psychedelic? It’s really against the grain, in the sense that from a Buddhist perspective, things are often the opposite of what they seem.

Something may look very different in apparent reality than it does in ultimate reality. That dichotomy, to a point, is recognized in Buddhism… We look at our lives in terms of relative truth and ultimate truth. It isn’t easy to grasp Buddhist ideas and to understand how the mind creates things, rather than just responds to them.

Jack Kornfied, a respected Buddhist teacher who talks openly about his psychedelic experiences, said that LSD prepared his mind for grasping the most difficult things in Buddhism.

For a lot of people, psychedelics are sort of a “gateway drug” that leads them to Buddhism. How do people describe these initial experiences that lead them to a Dharma practice?

What a lot of people will say is that they took a psychedelic journey, and they reached a place that was extremely beautiful and special and had a non-dual character; that the whole world made sense to them and was integrated; that they were integrated with the world; that everything was alive.

People describe these almost oceanic feelings of joy and connection. They don’t want to have a practice that involves a chemical dependency so they look for ways to kindle that feeling again in a more sustainable way.

There’s kind of a migration to Buddhism to reach the highs that they had some experience with in their psychedelic journey.

Not everyone thinks this is a good idea. What are some of the arguments against psychedelic use in a dharma practice?

I think where a lot of people are currently is they’ve had some experience with psychedelics and with a mystical wing of a religion or spiritual practice -- it might even be yoga -- and then have taken up psychedelics occasionally since then. So there’s an ongoing relationship with psychedelics while they explore a more everyday sustainable path of integration with a lot of the things that came up in their psychedelic journeys. I think there’s a middle path there.

Why do you think 2015 is such an important moment for both Buddhism and psychedelics?

I think there’s a new challenge that asks us to look again at how we can employ psychedelics, or not, because we’re facing unprecedented challenges as a species. We’re in deep doodoo, ecologically speaking.

The real problem, I think most people agree, is a problem of consciousness. We need to change consciousness. When you look around, there aren’t that many strategies that can bring about a rapid change in consciousness, but psychedelics is one of them. So we need to have that conversation. Psychedelics are in the toolkit and we have to find the best way to use those tools in a way that is safe and respectful.


"There aren’t that many strategies that can bring about a rapid change in consciousness, but psychedelics is one of them."

Is there a risk here for spiritual materialism -- becoming attached to peak experiences and using them to strengthen the ego, rather than tame it?

I think there is a risk. The ego is so profound and so able to gain things and twist them around and co-opt them. So the standard cautions of set, setting and intention are important for your own fulfillment and for being a warrior for change.

Putting all those factors in the mix, and not just your own pleasure, is helpful.

There’s anthropological evidence that the drive to alter consciousness is an innate and universal aspect of the human experience. And yet, there's a great deal of shame and guilt in our culture around doing this, even if it's in a spiritual or therapeutic context. When do you think we transitioned from viewing altered states as sacred to viewing them as shameful?

In every religious tradition, there’s been an esoteric, sort of secret initiation usually where usually plant psychedelics or something like that have been involved. It’s just about ubiquitous around the planet in every culture, and really going back as far as human culture goes.

But there was a concerted effort in certain periods of history to stamp that out for political reasons. For example, the Nixon administration declared a very special kind of war on substances. I think Nixon realized that when people smoked weed, they didn’t like him [laughs].

That created an atmosphere of repression and fear, and that served their political purposes. But there are many factors that contributed to how we got to a real extreme on the end of being repressive and seeing no value in altered states, even when used with high intentions.

What are some of the most exciting directions for psychedelic research?

Hopefully we will have in place opportunities for people who need these medicines to get what they need, and to be in the hands of qualified professionals in safe settings. So not only because the earth is going to hell ecologically and we need to change consciousness quickly, but also to relieve suffering and to make it possible for people to get really profound and powerful help.

There are some interesting studies even on Buddhism and psychedelics, including a Johns Hopkins study looking at long-term meditators that is in its early stages. There are the PTSD studies, the end-of-life anxiety studies -- there are just so many really interesting areas to look at how psychedelics can be a medicine and help people as opposed to being something harmful.