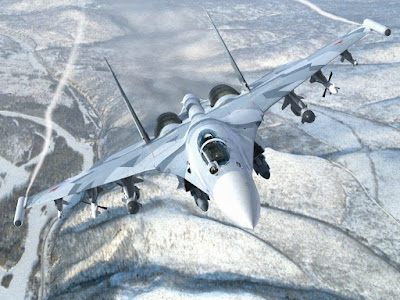 Air superiority was never properly explained over the past thirty years and here we have the explanation.  It otherwise would have been far closer to Vietnam ratios which were pretty daunting for American pilots by the by.

It is obvious that Russia was matching US capabilities and their pilots were also just as crazy.  This had to have continued so the sudden dropoff makes scant sense unless espionage is involved and once embedded as happened here it takes decades to undo the damage.

The next generation will be drones which allows the pilot to be extracted from the Cockpit and react at super human accelerations.  F-35 programs and their like may well never see signioficant deployment and considering how difficult they are on the pilots it is likely just as well.  Why risk a good pilot when he can operate a flock of super drones and then peel one of for an attack whil the rest fly by machine intelligence.

By Armin Rosen14 hours ago

The skies over Syria are dangerously crowded these days with the US, Russia, and the Assad regime all bombing various actors on vaguely opposite sides of the country's multidimensional conflict.

In both Iraq and Syria, the reality of overlapping aerial operations among countries with little geopolitical fondness toward one another has already led to claims that British aircraft have been authorized to engage Russian aircraft over Iraq if threatened.

The British government denied these reports, but they still underscore the possibility of confrontation between allied and Russian military aircraft.

Several presidential candidates, including Democratic front-runner and former Secretary of State Hillary Clinton, have called for an allied-enforced no-fly zone in northern Syria — a development that would be partly aimed at containing Russian operations.

In Politico, former State Department official Frederic Hof recently advocated a robust US response to any deliberate Russian provocation: "But if Russia seeks out armed confrontation with the United States in Syria, it would be a mistake for Washington to back down," Hof wrote.

"People like [Russian president Vladimir] Putin will push until they hit steel."

There's already been one alarming incident: According to AFP, Russia announced on October 14 that one of its planes had approached a US aircraft over Syria "for identification purposes," with one Russian official explaining that Russian aircraft "often come within visual recognition distance of US warplanes and drones."

So what would happen if Russian and US aircraft began shooting at one another over Syria?

In the early and mid-1980s, Tolkachev, who was the head of a Soviet weapons-research laboratory, gave the CIA specifications for the next decade's worth of Soviet combat-aircraft radar systems.

"The amazing thing is that Tolkachov was bringing us not only what was happening now but what would be happening 10 years from now," Hoffman told Business Insider in an interview earlier this year.

Since the Soviet Union was the US' primary conventional foe, that information led the US to build specific counter-capabilities into its own aircraft — ways of evading advanced Soviet aircraft radar or of exploiting gaps in radar coverage.

"This intelligence went right into electronics that were deployed, but never mentioned in anyone’s National Intelligence Estimate," Hoffman explained to Business Insider.

This technological and intelligence edge is one of the reasons for the US' aerial superiority over Soviet-built combat aircraft since the fall of the Soviet Union.

During the 1991 Gulf War, while in "direct aerial combat over Iraq, the US Air Force downed every Soviet-built tactical fighter that it confronted," Hoffman writes, even though they were being flown by pilots from what was then one of the most formidable militaries in the Middle East at the time.

US pilots had a similarly perfect record when facing off against Yugoslavia's Soviet-built aircraft and air defenses during the 1990s Balkan conflicts.

"Thus, the kill ratios went from six to one in Korea, and two to one in Vietnam, to 48-to-zero for the air force in the wars in Iraq and the Balkans."

As a partial result of Tolkachev's espionage, "The United States has enjoyed almost total air superiority over Soviet-built fighters for more than two decades," he writes.

The technical superiority that Tolkachev's espionage enabled has applications in the present day, in situations where US aircraft might come into conflict with Soviet fighters built in the 1980s and early 1990s. But it could conceivably extend to planes built after that period as well.

Even some of the most advanced Russian aircraft began their development either at the end of Soviet period or in the immediate post-Soviet period, when communist-era state defense institutes were often left intact.

For instance, the Su-34 Fullback multirole fighter jet — four of which are currently in Syria — first flew in 1990, although the plane didn't officially enter service until 2014. Russia also has Su-30 Flankers in Syria.

Both planes are descendants of the SU-27 multirole fighter, the radar specifications of which were fully known to US military planners, thanks to Tolkachev.

Hoffman speculated to Business Insider that some of Tolkachev's information is still relevant to US national security.

"I still think there are big parts of what Tolkachev delivered that are still in use and that are legitimately still classified," Hoffman said. "Even though this case is three decades old, it’s quite likely that some of that stuff is still considered pretty valuable intelligence."

Tolkachev's information helped the US dominate the skies in earlier operations against Soviet-built fighters. And if there's shooting over Syria, an intelligence operation from the Cold War's critical final decade might come in handy all over again.
Posted by arclein at 12:00 AM