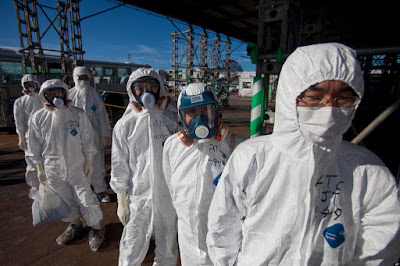 Three mile island made it abundantly clear that a failed nuclear reactor was an almost impossible cleanup proposition.  That it was resolved merely made the point which was confirmed again and again by later disasters.

Now we have the inevitable disaster that they cannot fix or even approached.  All reactors are potentially this dangerous, yet we keep building them.

Even if we have technology to help we need robots that will fail quickly as well. Yet we need to fix it
.
.

NaturalNews) The head of Japan's crippled Fukushima Daiichi nuclear power plant has admitted in an interview with the Times of London that the technology does not yet exist that would allow the decommissioning of the three remaining melted-down reactors. He has no idea when such technology might be available, and he said it could take as long as 200 years.

The Tokyo Electric Power Company (TEPCO) has set a goal of 40 years (i.e., by 2051) to clean up the plant following the 2011 meltdowns, which were triggered by a massive earthquake and tsunami.
"There are so many uncertainties involved," Fukushima chief Akira Ono said. "We need to develop many, many technologies. For removal of the debris, we don't have accurate information [about the state of the reactors] or any viable methodology."

In February, TEPCO took reporters from the Australian Broadcasting Corporation (ABC) on a tour of the plant, complete with special breathing machinery and vacuum-sealed gear. The company told the reporters that radiation levels at the plant have dropped significantly and that real progress was being made toward decommissioning the plant. They highlighted the successful decommissioning of Reactor 4, which had suffered a hydrogen explosion during the tsunami that left nuclear fuel rods at risk of meltdown. The reactor had been offline at the time of the tsunami.

The reporters were not allowed to visit Reactors 1, 2 or 3, which are still so radioactive that they would instantly kill anyone who entered. The reporters' guide, Kenichiro Matsui, admitted that TEPCO still has only limited information about the situation inside the three melted-down reactors.

"We do not know [the] exact situation in detail," Matsui said. "Fuel has been melted down but nobody has seen it... We need to develop robotic technology with help from around the world to know the real situation."

Although robots have successfully managed to locate some of the fuel rods in the three reactors in recent months, any attempt to remove them would still be so dangerous that TEPCO has postponed such efforts until at least 2025.

Without a constant flood of cooling water, Reactors 1, 2 and 3 would immediately resume meltdown and explode again, spewing more radioactivity into the surrounding countryside. Unfortunately, this means that TEPCO is constantly rendering more and more water radioactive by channeling it past the reactors. On top of this, rainwater and groundwater continue to leak into the reactors, exacerbating the problem. To date, more than 500,000 metric tons of radioactive water are being stored at the plant.

The buildup of radioactive water has made vast sections of the plant - even beyond the deadly reactors - incredibly dangerous to enter. TEPCO has identified this as the highest priority for the Fukushima cleanup. Even four years after the disaster, nearly all of TEPCO's Fukushima cleanup budget and nearly all of the 6,000 workers allocated to it are working to contain the radioactive water.

"The contaminated water is the most pressing issue - there is no doubt about that," Ono said. "Our efforts to address the problem are at their peak now. Though I cannot say exactly when, I hope things start getting better when the measures start taking effect."

TEPCO has promoted two technological fixes for the problem of the water. In an effort to stem the buildup of water, the company planned to build an "ice wall" - a network of subfreezing pipes sunk into the ground that would freeze the soil and cut it off from further groundwater infiltration. Widely criticized by the scientific community as unrealistic and unfeasible, this project has now been postponed.

The company has also tested an advanced system for treating the radioactive water, but technical problems and the enormous scale of the issue have caused this project to keep meeting its deadlines.