Thoughts on The Mahabharata and the Iliad 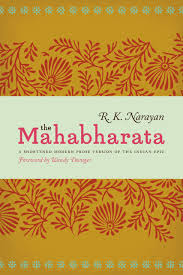 I have recently read this book and it stirred observations.  This is a book length  presentation of the central narrative of the Mahabharata.  It powerfully reminded me of the Iliad which is a comparable Bronze Age narrative and  certain aspects stand out.  I apply the phrase bronze Age here because the whole style applies to a scripture that was read aloud or recited from memory to a large assembly gathered to be entertained and educated as well.


This assembly was largely illiterate and that hugely explains a lot of structure and approach.  To put this in perspective, the text i just read may consist of two hundred thousand words.  The original consists of five million words and this is caused by all the insertions of history and philosophical discussion.  It really is a library of over twenty five separate books by our own measure.


It is no wonder that it has struggled to make the transition into the modern world.

Indian novelist Narayan has produced accessible English translations of the Mahabharata and the Ramayana, the great Sanskrit epics. Drastic abridgment limits their scholarly use — the entire Bhagavid Gita section of the Mahabharata, for example, is condensed into a couple of paragraphs — but they preserve the central stories and characters. In the Mahabharata the five Pandava brothers (Yudhistira, Arjuna, Bhima, Nakula, and Sahadeva) struggle to obtain their inheritance, culminating in the great battle of Kurukshetra. The Ramayana centres on Rama, avatar of Vishnu, covering his marriage, the theft of his wife Sita by the demon-king Ravana, and the search and struggle to recover her. Both epics have a plethora of side stories, covering the adventures of the heroes in exile and the deeds of their supporters and opponents.

The epics have been retold and reworked many times (Narayan's Ramayana is itself based on an eleventh century Tamil version by Kamban), but simple accessible versions have an important place. The Mahabharata and the Ramayana pervade south and southeast Asian religion, art, literature, and popular culture; they are a central part of the world's literary heritage and should be better known in the West. To this end, Narayan's versions could be used in schools and read by (or to) children, along with the stories of biblical and Greek mythology. To help those unfamiliar with the setting and context, he includes with each volume a brief introduction, a list of characters, and a glossary of Indian words.
Posted by arclein at 12:00 AM