After Paris, France Contemplates a Reckoning 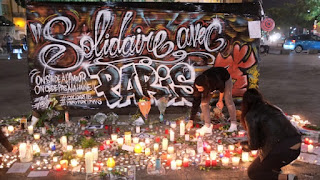 I am loath to tackle all this simply because events are accelerating and anything written will be quickly out of date.

What is happening is that we are seeing a natural emergence of barbarism brought about by mostly the teachings of Islam.  In fact I am more impressed that the rest of the world almost completely refuses to join in any way.  Like Nazism, its child, the simple teachings are terribly seductive to the young in particular.

Yet the barbarians have merely taken the obvious lesson that it is possible to cause a lot of damage easily in the modern world no matter what is done.  It really is shooting fish in a barrel.  You merely collect an automatic weapon and get perhaps a few minutes of familiarization.  Then find a crowd and open fire.  Suddenly you are an important jihadi.

Having a friend or two or even a few allows for much more sophisticated operations but ultimately not so hard.  It cannot get any bigger than that because security becomes impossible.  Yet they can make us accept casualties of a hundred here or there to win great press.  In the end, we can accept these casualties.  We are just not used to them.

That is the first strategy available and that is to accept the losses.  It does not feel right but it is also the cheapest when it is impossible to stop it at all.  Recall that Paris still happened after billions spent in security that all failed.

Then there is select military action which means nothing except to punish the wrong guys.

To win this game we have to do it completely differently.  We have to think like them and communicate in actions they understand.  That at least means summary execution.  It may mean feeding their bodies to a herd of pigs.  Remember these are children in love with barbarism.  Show them a result that they cannot stand or even talk about.  What i am saying is that we must make their deaths ignominious and embarrassing for their families to talk about.   Bin Laden's death was a decent example of how to do it, but we need to go further.

I have always felt that direct immediate action that is obviously supralegal was best and to ask for forgiveness after.  That means immediate aggressive interrogation including all the known wannabes who police have been watching.  Scare the hell out of them and then soften up slightly and let them go.  They are then in no doubt that they are known and second thoughts creep in..

.After Paris, France Contemplates a Reckoning

Details are still emerging as to precisely who was responsible for the Nov. 13 Paris attacks. Sorting through the jumble of misinformation and disinformation will be challenging for French authorities, and for outside observers such as Stratfor.

While the Islamic State has claimed credit for the attack, it is still uncertain to what degree the Islamic State core organization was responsible for planning, funding or directing it. It is not clear whether the attackers were grassroots operatives encouraged by the organization like Paris Kosher Deli gunman Ahmed Coulibaly, if the operatives were professional terrorist cadres dispatched by the core group or if the attack was some combination of the two.
Analysis

French President Francois Hollande publicly placed responsibility for the Nov. 13 attack on the Islamic State, declaring it an act of war. This French response to the Paris attacks is markedly different from that of the Spanish Government following the March 2004 Madrid train bombings. Instead of pulling back from the global coalition working against jihadism, it appears that the French will renew and perhaps expand their efforts to pursue revenge for the most recent assault. The precise nature of this response will be determined by who is ultimately found to be the author of the Nov. 13 attack.

To date, there has been something akin to a division of labor in the anti-jihadist effort, with the French heavily focused on the Sahel region of Africa. The French have also supported coalition efforts in Iraq and Syria, stationing six Dassault Rafale jets in the United Arab Emirates and six Mirage jets in Jordan. On Nov. 4, Paris announced it was sending the nuclear-powered aircraft carrier Charles de Gaulle to enhance ongoing airstrikes against the Islamic State in Syria and Iraq. To date, French aircraft have flown more than 1,285 missions against Islamic State targets in Iraq, and only two sorties in Syria.

France has numerous options for retaliation at its disposal, but its response will be conditioned by who was ultimately responsible. If it is found that the Islamic State core group was indeed behind the Nov. 13 attack, France will likely ramp up its Syrian air operations. The skies over Syria, however, are already congested with coalition and Russian aircraft. With this in mind, the French may choose to retaliate by focusing instead on the Islamic State in Iraq, or perhaps even other Islamic State provinces in places such as Libya. Another option would be to increase French programs to train and support anti-Islamic State forces in Iraq and Syria, or even to conduct commando strikes against key leadership nodes. France also has the option of deploying an expeditionary force like it did in the Sahel, although that would probably require outside airlift capacity from NATO allies, especially the United States.

The Paris attacks occurred during a Europe-wide political crisis over migrant flows from the Middle East, Asia and Africa. A Syrian passport was found near the body of one of the Paris attackers, prompting a Greek official to say Nov. 14 that the name on the document belonged to a person who passed though Greece in October. This news means that a number of politicians critical of the European Union's response to the immigrant crisis will amplify their disapproval. In particular, advocates who want to end the Schengen agreement, which eliminated border controls in Europe, will use Paris to support their cause.

This has already begun. Poland became the first country to link the Paris attacks to the uptick in immigration. On Nov. 14, Polish Minister for European Affairs-designate Konrad Szymanski said the Paris attacks make impossible the implementation of an EU plan to distribute asylum seekers across the Continental bloc. As expected, France's National Front party also demanded the end of the Schengen agreement. In a televised speech, party leader Marine Le Pen said France has to "recapture control of its borders."

In Germany, Bavarian Prime Minister Horst Seehofer said the Paris attack demonstrates that border controls are more necessary than ever. Seehofer has been very critical of the German government's handling of the refugee crisis, demanding permanent border controls as well as faster repatriation of asylum seekers. The Paris attack will likely strengthen his position and further weaken the government of Chancellor Angela Merkel, which was already facing internal dissent because of the migration crisis. In recent weeks Germany has seen an increase in anti-immigrant violence, including arson attacks against refugee shelters. The Nov. 13 attacks may encourage more extremist groups across Europe to attack asylum seekers.

The anti-Schengen camp will feel vindicated by a parallel event that took place in southern Germany last week, when a Montenegrin citizen was arrested while allegedly driving to Paris with several weapons. While German police have not established a direct connection between this incident and the Nov. 13 attacks, they have said that a link cannot be ruled out. The fact that this man was from Montenegro — a country in the Western Balkans — and made it to Germany in his car will strengthen the demands for stricter border controls along the so-called Balkan route of migration, which connects Greece to Northern Europe.

The Paris attacks will therefore improve the popularity of anti-immigration parties in many European countries, and continue to weaken popular support for the Schengen agreement. Several countries, including Germany, Sweden, Slovenia and Hungary had already re-established border controls because of the immigration crisis. Hungary and Slovenia have gone as far as building fences along their borders. After the Nov. 13 attacks, most EU governments will find it hard to justify a policy of open borders.
Posted by arclein at 12:00 AM

Dear Arclain ! How are you doing there ?

Firstly, I would like to thank you for continuing to bringing a lot of interesting articles to our attention, they are welcomed

But this personal "comment" that you have supplied for this article is just plain childish, it is like something you would hear a lost kid who has no idea what's going on would say, caught in a blind furry of rage and misinformation

You are a pretty smart guy, albeit still far from enlightenment :(

Please try to understand that these little "terrorist" actions/plots have been created by European and American countries themselves, directly or indirectly, bombing Syria prior, or just plain arming rebel troops fighting whoever they are fighting, and directly or indirectly sponsoring groups and making profits on drug and weapons trade, and distability in the country...
Before reading any further, AT LEAST, Please watch this little video,
- https://youtu.be/1D-9_LFPN7g

Thank you for listening, Arclein
And try to remember, that most of the Spiritual can't be understood through through logic and reason,
and let alone a "scientific approach" .