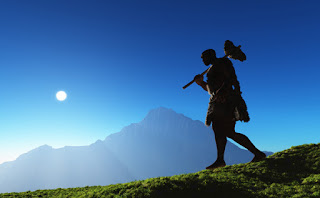 What this emphasizes is that our dating methods simply fail us as often as they work.  Our understanding of geological process is also deeply flawed and we have been outright ignoring inconvenient anomalies for far too long.

Then again we have been ignoring the moon.

I do not like deus ex machina explanations but i also get frustrated by studied ignorance when inconvenient facts show up.

It is obvious that the earliest expression of the primate linage spread out almost immediately worldwide and then additionally speciated to its heart's content.    Thus we have a broad distribution over several variables through deep strata to work with.  We have not even begun to have enough clear data and interpreting it all is a fool' s game and that is what we are dealing with.

If tracing this lineage from our earliest ancestor seems inconsistent or spotty, that’s because it is. We have a makeshift model of human history that had been cobbled together by geneticists, archaeologists, anthropologists and biologists. Finding common ground and an overall consensus among these different disciplines makes finding the truth even harder. Looking back at human history is an optical illusion; new archaeological discoveries are always challenging what we already know, and constant revisions are being made.

In 2013, a major find would cause further controversy within the already complex grouping of hominids. In Dmanisi, Georgia, an archaeological dig was under way. After finding a series of four similar-looking skills during the dig, the fifth one looked irregular. This skull had a small braincase, large teeth and a powerful jaw, but judging by the skull’s shape and structure, it must have been attached to a long-limbed, human-like body, not a short-limbed, muscular body like Australopithecus. An apelike skull attached to a human body are features that never co-existed prior to this discovery. This has led scientists to believe that the Homo Subspecies of Ergaster, Erectus, Rudolfensis, Habilis and so forth, may have actually been one species that simply looked different - much like the varying appearances of different races we encounter today. This find has been known as “Skull 5”, and has already caused a debate about how the homo species should be classified. This finding will spawn a debate until a newer find is unearthed and new data is presented. These revisions will continue until we either run out of fossils or more advanced technology allows us to shed light on this ongoing mystery.

The scientific dating of species that have been found is volatile by nature. Lucy, the Australopithecus specimen went through several date revisions since she was found. Anthropologist Susan Martinez outlines the numerous times Lucy has been re-dated to fit with contemporary theories. In the 1950’s following Lucy’s discovery, she was estimated to be at least 500,000 years old. This number changed in the 1970’s to at least a million years old. After new discoveries in Ethiopia, that number jumped to two million. The wide estimates between these broad and sweeping figures are known as scatter in archaeological terms. A species known as Petralona Man is said to have existed between 70,000 to 700,000 years ago. Another known as Morocco Man was first estimated to be 40,000 years old, until further tests actually placed him at 125,000 years old. The prevalence of scatter across these finds makes it no wonder why our lineage is so difficult to trace. How is it that these figures come to be so slippery and hard to pin on a timeline?

The techniques used to calculate the date of a fossil aren’t perfect and are subject to error. A technique known as radiocarbon dating works by measuring how levels of carbon have dropped in a bone fragment or artifact over time. Exposure from the sun on a piece of bone, for example, accumulates nitrogen in the bone fragment. This nitrogen turns into carbon-14, which acts as a measuring guide for how old an object is. Over time, carbon-14 levels decrease – these levels serve as a yardstick for the age of the object. This technique is most accurate up to a period of 60,000 years – anything longer and results are often unreliable. The level of carbon decay may have varied across different time periods in the past. Some species may have had less exposure to sun, or climate change may have influenced the amount of carbon in the atmosphere. The higher the fossil is in the surface of the Earth, the more likely it comes into contact with weather, animals and other agents. Even exposure to coal can contaminate the carbon levels in a finding, yielding highly different results. A finding in France known as the Fontechevade Man has been estimated to be between 40,000 to 800,000 years old just based on readings of nitrogen levels alone. Scientists have even resorted to using different levels of dating to counterbalance the levels of scatter that may occur from carbon dating.

One technique known as faunal dating looks at the animal remains of species that may have existed millions of years ago. Traces of these species can let us know how old an object is, but can yield confusing results. Susan Martinez offers a good example: We have estimated Trilobytes (an ancient crab-like species) to have existed at least 550 million years ago – the Cambrian era. But any finding with traces of Trilobytes is said to be from the Cambrian era. How do we know Trilobytes are 550 million years old? Because Trilobytes existed 550 million years ago. This argument goes in circles and explains why a technique like faunal dating is unreliable in reading human fossils we encounter. We use fossils to date rocks, or rocks to date fossils – we are left with only relative dates of which species lived when. These are problems that arise when trying to date these fossil finds. Each new find re-writes history, which is written again, further confusing our already obscure and complicated origins.

In 1971, archaeologist Lin Ottinger was digging in the Moab region in the state of Utah, an area known for heavy mining operations. He came across a patch of dark brown stained dirt over the otherwise white colored sand. He began to dig, until his knife came across something solid. Thinking it was a piece of leftover mining equipment, he continued to dig until he came across a fragment of human bone. The problem was the six feet of solid rock he was digging through to reach the specimen was estimated to be at least 100 million years old.

Some bone fragments from ‘Moab Man’. They are stained green by the copper content of the soil.

There is a term in archaeology known as an in situ finding. “In situ”, is a Latin term meaning “in position”, the idea being that a finding has never been moved, adjusted or manipulated from its original position upon discovery. Given the age of the rocks, the specimen would have to be just as old. Knowing that this finding would be controversial but important, he left the artifact as he found it, only uncovering what would be sufficient for further research. Ottinger brought this discovery to the attention of Dr. Marwitt, professor of anthropology at the University of Utah, who then assembled a small team to continue research. They discovered another skeleton, exactly the same age as the first, but with fragments missing, most likely due to mining. Scattered around the region were fragments of bone and teeth, believed to be from the existing two skeletons. Further research found that the first skeleton had been buried in a kind of fetal posture - a position similar to that used by native tribes during burial ceremonies. This discovery has been known as the “Moab Man”, and has strangely been buried under the rug by the scientific community, who has refused to age date the bones.

The Moab Man has been dismissed as an attempt by Christian fundamentalists to prove creationism and the idea that humans existed with dinosaurs. Putting religious debate aside for a moment, suppose that this finding really was as old as the dirt it was buried in. Would we not have to rewrite our entire understanding of human origins, stating that humans were at once anatomically modern, before devolving into Neandertals only to re-emerge as homo sapiens? A hoax? Probably not. But an anomaly? Yes. Even the most fervent of Christian fundamentalists would have a hard time digging through six feet of 100 million year old solid rock, buried under ten feet of sand, to implant an anatomically modern correct human skeleton, only to seal the rock and bury it again. This find is much to elaborate to be considered a hoax, by creationists or anyone else for that matter. Since its discovery, the Moab Man has been abandoned, with minimal exposure.

A second anomalous artifact was discovered in 1881 in the Red Crag region of England. Red Crag formations are large segments of rock that date back approximately 2-2.5 million years ago during the early Pleistocene Era. The biggest of these formations found in the Suffolk and Essex regions of England. They are given their name for their deep red pigmentation. These rocky deposits are among the oldest formations on Earth, and finding any trace of human interaction would raise attention.

Fossilized shell found by H. Slopes, appearing to show a face carved into the surface.

A geologist named H. Slopes, while digging within this ancient region came across a small, round fossilized shell, colored deep red with pigmentation after being embedded in the red stone for thousands of years. On the other side of the shell was a crude but unmistakeable engraving of a human face, depicting two round eyes, a triangular nose pointing downwards, and a thin mouth roughly in the shape of a smile. Similar Red Crag fossils when scratched on the surface show white underneath. The shell was extremely brittle – it would be hard to imagine engraving its fragile surface. Had this fossil been any younger, the eyes, the triangular nose and mouth would have shown traces of white – the fossil’s original color being revealed after the red pigmentation had been cut through. Instead, the design of the face was engraved into the red stone, meaning the engraving had to occur at a time similar to when the rock was originally buried into the Earth; sometime during the early Pleistocene. Artwork and depictions of human faces were a feat unique to Cro Magnons. But Cro Magnons did not appear until the late Pleistocene, 60,000 years ago. This scenario hints at the possibility of Cro Magnons arriving much earlier than expected, or at least being present during the early Pleistocene. Another strange piece of the puzzle.

The above article is an extract from Chapter 2 of “The Human Anomaly”, and has been republished with permission. For more information, click here.