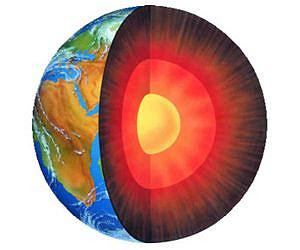 Well maybe.  I view this as a low probability conjecture for now.  As far as mass is concerned, i am much more inclined to rely on carbon.  This is because of temperature and the disassociation of compounds.


Yet both can work together.   We do need to master gravity and then penetrate the core to figure out the structure.  That will be a while yet.


The take home is that our core is lighter than it should be based on known heavy metals.  That confirms the need for lighter atoms..

So perhaps there is some truth in the old legends of the underworld reeking of brimstone (or sulphur, as it is now called)? New research confirms that the Earth's core does in fact contain vast amounts of sulphur, estimated to be up to 8.5 x 1018 tonnes.

This is about 10 times the amount of sulphur in the rest of the Earth, based on the most recent estimates (and for comparison, around 10% of the total mass of the Moon). This is the first time that scientists have conclusive geochemical evidence for sulphur in the Earth's core, lending weight to the theory that the Moon was formed by a planet-sized body colliding with the Earth. This work is reported in the peer-reviewed journal, Geochemical Perspectives Letters*.

The Earth's core begins 2900km beneath our feet, so it is impossible to investigate directly. However, an international group of researchers have been able to develop indirect geochemical methods to show core composition.

As lead researcher Dr Paul Savage (Department of Earth Sciences, Durham University, UK) said:
"Scientists have suspected that there is sulphur in the core for some time, but this is the first time we have solid geochemical evidence to support the idea."

For a long time it has been known that the Earth's core is too light to be made only of iron and nickel, and it had been assumed that the core contained other lighter elements, such as sulphur, silicon, oxygen and carbon. However, given the depth of the core, this has been impossible to confirm directly.

Fortunately, a cataclysmic event in the distant past - when the Earth collided with a large, planet-sized body, tearing off the part which became our Moon - left a fingerprint, which has been used to confirm the core content.

The researchers believe that the impact of the collision melted the Earth's mantle, allowing a sulphur-rich liquid to form in Earth's mantle, the vast middle layer between the core and the crust; some was probably lost into space, but some remained and sunk into the core.

The key to confirming this lay in measuring the isotope ratios of elements (isotopes are atoms of the same element with slightly different masses) in the mantle, and comparing these to certain meteorites, which are believed to be the best match to the Earth's original composition.

Because of variability in mantle composition, it is difficult to draw firm conclusions from measuring sulphur directly, so the researchers chose to analyse copper from the Earth's mantle and crust - copper is often bound to sulphur.

"We chose copper, because it is a chalcophile element, which means it prefers to be in sulphide-rich material - so is a good element to trace the fate of sulphur on Earth," said senior author Professor Frederic Moynier (Institut de Physique du Globe, Paris). "Generally, where there is copper, there is sulphur; copper gives us a proxy measurement for sulphur."

The work comprised 3 distinct stages: + Firstly, the researchers had to estimate the isotopic composition of copper in the Earth's mantle and crust.

+ Secondly, they had to estimate the isotopic composition of copper in the Earth before it formed a core, and was bombarded by giant impactors. Direct measurement is of course impossible, so they used meteorites, which are regarded as the best analogue.

+ Finally, they had to simulate which copper isotopic signature would be generated by the removal of sulphur-rich liquid after the 'giant impact'.

Using the state-of-the-art mass spectroscopes at the Washington University in St. Louis and the Institut de Physique du Globe, Paris, they were able to confirm that there was a difference of 0.025% in the copper isotopic ratios between the Earth mantle samples, and the meteorite samples. Because the isotopes of copper divide unevenly between a sulphur-rich liquid and the rest of Earth's mantle, this shows that a large amount of sulphur must have been removed from the mantle.

Paul Savage said, "This study is the first to show clear geochemical evidence that a sulphide liquid must have separated from the mantle early on in Earth's history - which most likely entered the core.

We estimate that the quantity of sulphur in the core is vast, around 8.5 x 1018 tonnes, which to give an idea of scale, is around 10% of the mass of the Moon. In addition, the work adds weight to the theory that the Moon was formed via a collision between the Earth and another body.

"In a way, we can also say that we have life imitating art. For millennia, tales have been told of the underworld being awash with fire and brimstone. Now at least, we can be sure of the brimstone."

Commenting, Executive Co-Editor of Geochemical Perspectives Letters, Professor Graham Pearson (University of Alberta) said, "The presence and identity of other elements in the Earth's core has been one of the most enduring problems in geochemistry. Savage and colleagues provide very elegant evidence, using isotopes of copper as a tracer, of the stripping of vast amounts of sulphur from the Earth's early mantle into the core.

"So the core turns out to be a good place to hide quite substantial amounts of elements other than iron and nickel. This study will surely encourage others to persist in the search for evidence of other elements in the core - data that is critically needed to complete our understanding of how the Earth formed and what the geochemical mass balance is in the Earth."
Posted by arclein at 12:00 AM