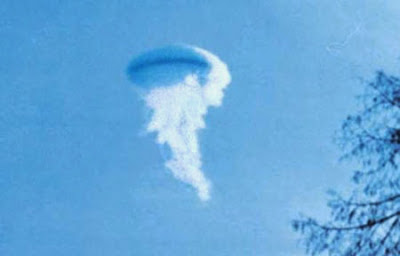 My ongoing efforts on reviewing cryptid reports and unknown phenomena has yielded two  serious new discoveries.  The big one is the clear ongoing existence of the Giant Sloth.  We are surely approaching four dozen such reports at the moment which is a lot and good enough to provide an excellent picture. of the creature.  At least we had fossil antecedents to work from.


The flying jellyfish is something that i produced out of the full cloth of the biology of the slime mold and known globs of biological debris.  We did have the infamous swamp gas explanation regarding UFOs which at least stretched my imagination.  We also had plenty of UFO's that behave randomly as blobs of light.  That is not much to go on.


Now we have a second close up eyeball report in excellent nighttime viewing conditions which i suspect is critical.  We gather completely new conforming information.  A tail makes excellent sense.  Better it is behaving like a methane filled balloon and migrating into the clouds and surely beyond.   .

I can vouch for BD and MP.

I live in Syd, Australia and I have seen something VERY similar to what has been previously described.

It was around 8-9pm when I decided to buy some snacks at the local Woolies with my sister. As we were walking down the street, my sister noticed something floating beside the telephone wires on the opposite side of the street. It was completely silent. As I looked across to where my sister was gawking, I saw something I have never seen before.

"It" appeared to glide down the street with us at walking pace. It even went through a few tall trees that blocked it's path. At first it looked like a plastic bag floating through the wind. But as we began to keep our eyes on it, what we saw was a translucent black/maybe dark substance, about the size of a kite.

[ it might even be able to see its surroundings which appears difficult and yes, it may well have been curious. - arclein ]

Naturally, I grabbed my phone to take pictures but as you know it's quite difficult to capture something at night, with no lights and see-through.

As we continued to walk down the street, I noticed that it could spin and even alter it's shape. It did not appear solid, so I assume it was a gas-like substance. I also noticed what appeared to be a VERY THIN, (almost invisible!) 1meter long tail that looked similar to that of a stingray. (keep in mind my sister says she saw no tail). The tail appeared and disappeared at times, only being used when it spun itself.

Once we had almost reached the end of the street, It began to slowly float higher and higher into the sky until our eyes could no longer see it. It passed through clouds, moved with the wind and disappeared without a single trace of sound.

My sister and I did not seem to have an affect on it as it carelessly drifted off into the night. This night became the night I truly began to acknowledge the FACT that we are not the only species that is curious about what's out there.