The Ridiculous Nature of Saudi Intelligence 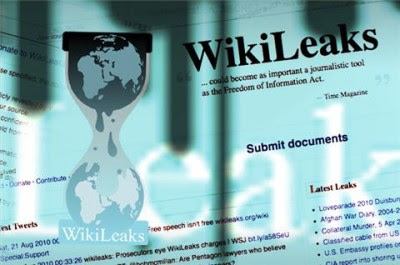 This release appears to be sent as a warning to the house of Saud rather that anything critical.  Russia Maybe?  They at least are in conversations.

However the point is well made that an awful lot of intelligence analysis generally is ridiculous.  That Saudi's is terrible merely confirms that the distribution is skewed terribly and we need to expect little of it.   Do these folks ever think to read the Economist?  At least that source pays for been wrong or simply stupid in terms of reputation.

I would actually approach the Economist to cover areas of interest and pay for staffing with zero strings attached.  Their work is good and commercial informants often catch the right signals.  After all, just how might you construct a nuclear installation without ordering specific steels? Governments can then pay bonuses for private briefings.
The Ridiculous Nature of Saudi Intelligence: What the Saudi Cables Released by WikiLeaks Say and Dont Say

Url of this article:


WikiLeaks released the first batch of the so-called Saudi cables on June 19, 2015. By June 22, a total of 61,214 of the documents were released online. More than half a million of these cables are in the hands of WikiLeaks.


The documents are believed to have been hacked from the Saudi Foreign Ministry in May 2015 by a group calling itself the Yemen Cyber Army as retaliation to the House of Sauds war against Yemen. The Yemen Cyber Army probably is not Yemeni and almost certainly is an outward show for another actor wishing to either penalize Riyadh or even possibly manipulate it.


In the Arab World there is great interest about the documents. The Lebanese newspaper Al-Akbar has also partnered itself with WikiLeaks to release the so-called Saudi cables, as it has with previous leaks. The Saudi cables, however, do not tell the world and Wikileaks readers anything new about Saudi Arabia. 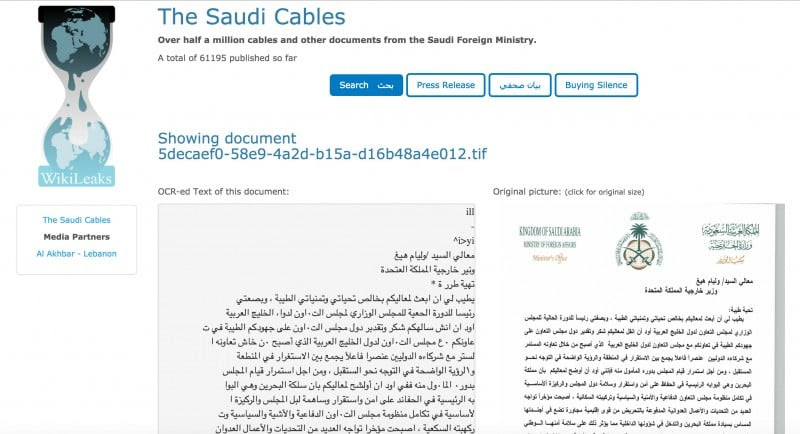 The Buying Influence of Riyadhs Petro-Dollar


The House of Saud has characteristically tried to buy influence. It wrongly believes that loyalty can be bought. Call them subsidies, grants, bursaries, or business contracts: they are all forms of bribery.

The documents released by WikiLeaks confirm that the House of Saud has used bribery as a major foreign policy tool by financing political figures in other countriessuch as the pro-Israeli warlord Samir Geagea in Lebanonand buying off individuals and organizations to secure its interests. This bribery includes co-opting and recruiting both Arabic and non-Arabic media outlets.

Additionally, the cables confirm that the Kingdom of Saudi Arabia has been spying on its citizens abroad, closely following Saudi university students to see if they want changes in Saudi Arabia, watching dissidents, trying its hardest to handicap Iranian interests, destabilizing Iraq, helping the dictators of Bahrain, and using Saudi-financed media to sanitize its image and deceive Arab audiences. Again, none of this tells us anything new that we did not know about the Kingdom and its decadent rulers.


The House of Sauds Information War

The documents depict the House of Saud as waging a perpetual and systematic campaign to influence and manage the media as part of a vulgar perception management strategy. Not only are Saudi-owned media outlets like Al Arabiya and Asharq Al-Awsat part of this, the Saudi Ministry of Culture and Information has been central to this policy of buying influence using the revenues from Saudi Arabias oil sales.


The Obvious versus the Unmentioned

Again, it has to be noted that it widely known that bribery have been an important and central policy tool for the morally bankrupt Saudi princes. It also has to be emphasized that the information about the Saudi media strategy released by WikiLeaks is not a new revelation. These Saudi activities have widely been recognized.

Nevertheless, Saudi Arabia has reacted to the release of the cables by WikiLeaks by warning its citizens to refrain from reading the documents. Riyadh has emphasized that ignoring the documents is a matter of national security. It has also declared that the documents being released by Wikileaks are doctored fabrications without even providing one example.


What is missing from the Saudi cables that WikiLeaks released heretofore are any documents about the House of Sauds support for Al-Qaeda and the other armed gangs that are wreaking havoc inside Syria, Lebanon, and Iraq. This is important and noteworthy.

The Timing of the Release: Targeting Rapprochement between Moscow and Riyadh?


There are some very important questions to be asked and thought over about the Saudi cables. Are the release of the Saudi cables retaliation for Saudi aggression in Yemen or punishment for efforts by the House of Saud to exert itself independently from Washington? Why is the crisis in Syria and Saudi support for the foreign fighters ravaging Syria largely left out of the leaks? If Saudi involvement in the fighting in Syria was seriously mentioned in the cables released by WikiLeaks it could incriminate other countries, such as the US, Britain, France, and Turkey.

The release of the Saudi cables may hurt Saudi Arabia economically and weaken its media strategy, which will lead to both economic and political instability for the Kingdom as it increasingly fails to control more information about the House of Sauds actions. Furthermore, the Saudi cables have been released on the eve of important talks and negotiations between Saudi and Russian officials that follow agreements and earlier talks between the Russian Federation and the Kingdom of Saudi Arabia at the St. Petersburg International Economic Forum. The bilateral talks are set to consolidate a series of agreements made on cooperation and trade between the Kingdom and the Russian Federation that will help boost the besieged Russian economy that Washington is trying to crash. This is why it is important to think over the origins and motives of the Yemen Cyber Army and ask who is pulling its strings? Is a genuine Saudi adversary behind the Yemen Cyber Army or an unhappy ally that wants to prevent any rapprochement between Saudi Arabia and Russia?

One of the documents that is getting increasing focus is an agreement between Russia and Saudi Arabia to vote for one another to join the United Nations Human Rights Council in Geneva. Is it a mere coincidence that UN Watch decided to focus on this agreement to criticize Russia and even refers to it as a dictatorship in an article published by Hillel Neuer on June 21,2015? Conversely, UN Watch has remained silent about the multitude of similar agreements made by the US with the House of Saud and other dictatorships. What has UN Watch said about Bahrain or Gaza? Why does it oppose the Venezuelan government? In reality, the goal of UN Watch has been to use the United Nations Human Rights Council to further the interests of the US and Israel while it undermines the body for criticizing Israeli human rights violations. UN Watch even helped legitimize the war on Libya by NATO in 2011 and has pushed for a war with Syria. Now it is targeting Russia.

Although Riyadh could be manipulating Moscow for Washington, joint funds, space cooperation, nuclear agreements, investments, and arms deals all seem to be in the works. The last time Saudi Arabia made major deals with the Kremlin nothing came out of them, either because the House of Saud was toying with the Russians or due to orders being sent from the US to Riyadh. 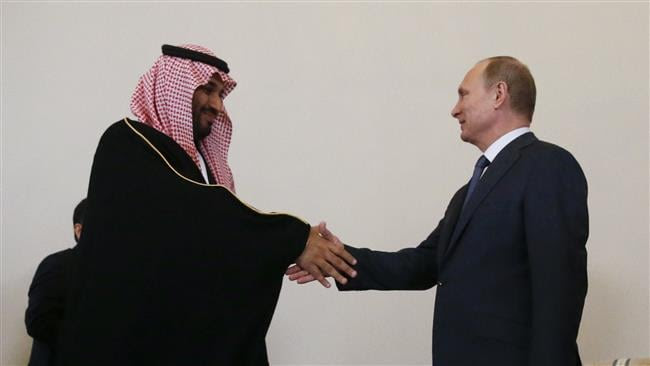 The Ridiculous Nature of Saudi Intelligence

A case in point is the Saudi intelligence report that mentions this author. As one of the subjects inside the initial batch of Saudi cables that WikiLeaks released, I took particular interest in looking over the Saudi intelligence memorandum that I was wrongly mentioned in as Mahdi Nazemroaya Darius. This particular Saudi intelligence memo relies on internet research to look at the background of myself and several colleagues who have pointed out how Saudi Arabia has supported terrorism and worked with the US and Israel in a destabilization campaign in the Middle East and North Africa.

Probably based on an assumption that I am of Iranian origin based on the name Darius, the memo ambiguously and wrongly speculates that I could be working for Iran without giving any context to what that could mean. The description of others are also all vulgar caricatures that simply refer to them as anti-American or anti-Western.

A Deficit of Critical Thinking in the Information Age

The type of misanalysis that is exemplified by Saudi intelligence analysts is increasingly endemic of intelligence services and the consultative firms that governments around the world, including in the United States, are increasingly relying on. In this regard, it is worth mentioning that this is actually the second time that I found myself mentioned in a document released by WikiLeaks; the first time was in 2013 when WikiLeaks released a hacked email about the possible whereabouts of Muammar Qaddafi from the Texas-based intelligence consultation company Strategic Forecasting (Stratfor). Stratfor was also off. The Texas-based company mistakenly listed me as an employee of the Associated Press inside Libya during NATOs bombing campaign while it was discussing the situation in the Rixos Al-Nasr and making arguments based on association fallacies.

In regards to the Saudi intelligence memo, it is clear that no real efforts were made to do proper background checks outside of the internet. It makes one cynically ask if Saudi Arabias intelligence structure does much more than police the Kingdoms local population and if it is the intelligence bodies of the US and other countries, including Britain and Israel, that are doing most the important intelligence work for Riyadh.

Looking over the documents released by WikiLeaks it becomes clear that they confirm what is already known about the House of Saud and that there is a serious problem of analysis in the organizational structures of Saudi Arabia. A lack of critical thinking is not a problem that money and bribery can solve either. With this type of mentality and lack of analytical thinking about the world, it is of little wonder that Riyadh got itself in a quagmire in Yemen. There, however, remain important questions about the motives for the release of the Saudi cables and about the background of the Yemen Cyber Army.
Posted by arclein at 12:00 AM