Extinct Tree Resurrected from Ancient Seeds is now a Dad 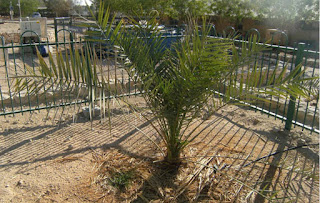 This is continuing good news.  We are on the way to back bred hybrids that will exhibit all the qualities of the original date palm. I have to believe that we are on the way to producing date forest throughout Israel and it will be welcomed by all.


One wonders what else may be discovered as well for plant species recovery.  At least we now know to look carefully when archeology is been done.  A two thousand year germination opens the door to almost everything that went extinct in the world of plants.


Even spores which we do know can survive opens the door to surprises.  That means any dry cave with wind blown dust  accumulating...

Extinct Tree Resurrected from Ancient Seeds is now a Dad


Ten years since the Judean Date Palm was miraculously brought back to life following the chance discovery of seeds in the 2,000-year-old ruins of Masada, the male date palm tree named Methuselah, the only one of his kind, has become a father.
For thousands of years, the date palm was a staple crop in the Kingdom of Judea, as it was a source of food, shelter and shade.  Thick forests of the palms towering up to 80 feet and spreading for 7 miles covered the Jordan River valley from the Sea of Galilee in the north to the shores of the Dead Sea in the south.
So valued was the tree that it became a recognized as a symbol of good fortune in Judea.  It is chronicled in the Bible, Quran and ancient literature for its diverse powers, from an aphrodisiac to a contraceptive, and as a cure for a wide range of diseases including cancer, malaria and toothache.
However, its value was also the source of its demise and eventual extinction.  The tree so defined the local economy that it became a prime resource for the invading Roman army to destroy.  Once the Roman Empire took control of the kingdom in 70 AD, the date palms were wiped out in an attempt to cripple the Jewish economy. They eventually succeeded and by 500 AD the once plentiful palm had completely disappeared, driven to extinction for the sake of conquest.
But all was not lost, because in 1963, the late archeologist Yigael Yadin began excavating Masada, a mountaintop fortress built over 2,000 years ago on the shore of the Dead Sea where King Herod built a spectacular palace. Masada was the last stand of a small band of Jewish rebels who held out against three Roman legions for several years before committing mass suicide in A.D. 73.
Read more:
Follow us: @ancientorigins on Twitter | ancientoriginsweb on Facebook
Posted by arclein at 12:00 AM