It appears that we are reducing impurities and we hope repeated firing will eliminate the oxygen in the system and allow Much lower levels of impurities.

Otherwise this is going well enough and with the usual fussiness.  I am so glad to see that cathode and fully appreciate just how difficult it is to manufacture. I would sooner take on the task of producing fusion.

This is an remarkably important technology if achieved will provide us with the internal drive system we will need for star ships.  It directly converts fusion energy into electrical current without a massive intermediary in the form of a heat engine.

Early Shots Show Impurities Dropping, But Not Yet Enough For High Fusion Yields

With just a dozen shots performed so far, we can draw only very preliminary conclusions from our results. The first is that impurities do indeed seem to have dropped significantly with the new electrodes—the first main goal of the new experiments. Impurities appear to be the basic obstacle to high fusion yields, as they disrupt the filaments that are the first stage of compression of the plasma. The optical spectra obtained in the new experiments show peaks at wavelengths characteristic of tungsten, but at roughly ten times less abundance than the copper and silver impurities seen in shots with the old electrodes (Figure 2). 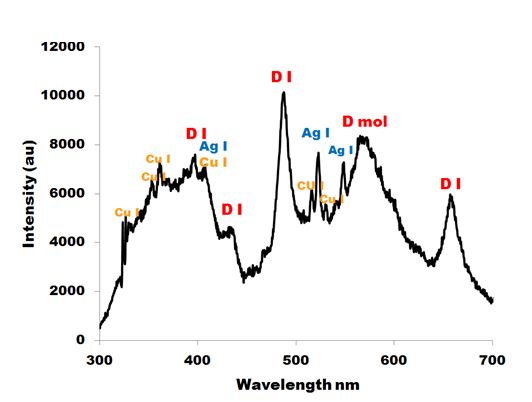 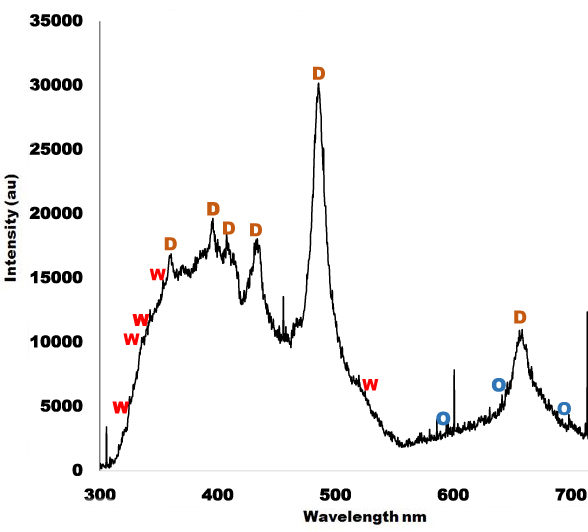 Figure 2 - The decline in impurities in FF-1’s plasma with the new tungsten electrodes is shown in this pair of optical spectra. In Figure 2a, top, the spectrum from the old electrodes show large copper(Cu) and silver(Ag) lines. The new spectrum from the tungsten electrodes, Figure 2b, bottom, shows much smaller tungsten (W) and oxygen (O) lines. Overall, impurities have dropped by about a factor of ten. The large molecular deuterium band has also disappeared in the new spectrum,indicating a hotter plasma.

Additional evidence is the much smaller amount of x-ray energy emitted for a given amount of fusion in the new experiments. X-rays are produced when electrons are sharply accelerated in collisions with ions—the nuclei of atoms. Since the metal impurity ions have a much higher electrical charge than the deuterium ions in the plasma (74 atomic charges for tungsten versus only 1 charge for deuterium) their collision with electrons produce far more X-rays —in proportion to the square of the atomic charge. For a given amount of fusion reactions, the amount of x-rays increases with increasing impurity levels. Observations of x-rays and neutrons with the new electrodes confirm a roughly tenfold decrease in the number of impurity ions.

While a tenfold reduction in impurities—to about one impurity ion for 500 deuterium ions—is a good start, it is not what Lerner calculated would be needed to preserve the filaments, nor what theory and previous experiments indicate can be achieved. For that, a 50-100 fold reduction in impurities is required, or 5-10 times less impurity than that has been achieved so far. Indeed, the initial results show the same symptoms of impurity—an “early beam” before the main pinch, and a slower motion of the current sheath, as had been observed with the old electrodes, although the early beam seems much smaller in the new shots. Given continued impurities, it is no surprise that fusion yields of about 1/8 of joule of energy are no higher than the best results observed with copper electrodes.

While it is much too soon to say for sure why impurities have not fallen further, one clue may be in the large amount of gas that has been released in the early shots. This gas, mainly oxygen, shows up as a pressure ”pop” after each shot, and has been observed before with newly installed copper electrodes. However, the amount of gas is more than three times larger than with the copper electrodes. It is thousands of times too much gas to be explained by adsorbed gas—oxygen adhering to the tungsten surface.

An alternative source might be a very thin layer of tungsten oxide—too thin to be seen or removed during the electrodes’ cleaning. Tungsten oxide dissociates at 1970 C, far below tungsten’s vaporization point of 5500 C, so an oxide layer will be far more fragile. The oxide layer might well give rise to the tungsten in the plasma as well. If this is the case, repeated firing will burn the oxide layer off and impurities will fall.

There are some hints that this may be happening, as x-ray emission and the pressure “pop” are falling as fusion yields are rising over the course of the first shots. But only more firing will confirm or refute this idea. The research team expects that as kinks are worked out of the system, firing will proceed more quickly, eventually reaching a goal of about 30 shots per week.