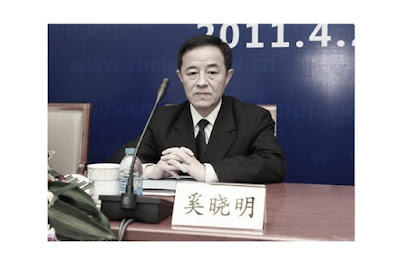 The dogs are clearly running and it appears that no one is immune.  Thus China is going to completely clean house and stiffen social discipline.  It will not work for too long and it is as certain that the collapsing market will reveal the need for a true free market to discipline crooks generally


Now i understand Li Kai Cheng's departure.  He would have known too many of those folks who are now losing and been forced to do business with them leaving him far too vulnerable.   It was still a good time to leave anyway.


I suspect that China will consolidate steadily now and perhaps better systems will arise...

Chinese state media announced on Sunday that the second most powerful official in the highest court in China has been detained under suspicion of “severe violations of discipline and the law.” The removal targets one of the most senior officials in the judicial system at a time when Communist Party security forces are conducting an intensive cleaning of the social groups and individuals they consider threatening to Party rule.

A native of Jiangsu Province, Xi Xiaoming has been in the judicial system since the early 1970s. Prior to becoming vice president of the Supreme People’s Court, he was the deputy secretary of the Shanghai Municipal Political and Legal Affairs Commission, the broad Party agency that coordinates the instruments of coercion in China, including the police, courts, labor camps, prisons, paramilitary police, and some of the intelligence forces.

Overseas Chinese-language media had been reporting since March of last year that Xi may have been in a precarious position, having been called in for discussions by anti-corruption investigators repeatedly. Those reports also sketched his shady connections to a powerful tycoon from Shanxi Province, Zhang Xinming, supposedly the most influential underworld figure in that region.

Zhang was dealt with by Party enforcers in August of 2014, taking with him a number of other Shanxi provincial Communist Party members.
Posted by arclein at 12:00 AM