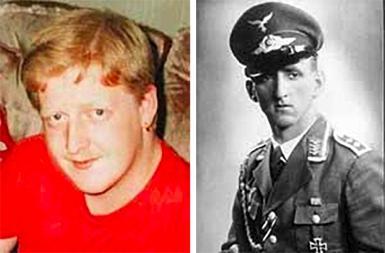 These reports are pretty typical and adds substantially to the data pool all confirming the whole pattern of the relationship between our physical existence and our spirit body.

What pleases me however is the last story in which it is observed that the spirit in question actually transferred almost immediately upon his death a month after conception.  This happens to be direct confirmation of a conjecture that i posted in which such spirit transference takes place around 49 days after conception.  There may be some slight variation but this report effectively nails it.

The mother supports the embryo with her own astral body until that moment.  The 49 day day calculation is the earliest in which the pineal gland is fully formed.  Spirit transferance should be then possible from 49 days through at least several more days providing a time matching flexibility.  .

SOME OF THE most compelling cases of reincarnation or past-life recall come from small children. If we have indeed lived previous lives, it is theorized that young children have sharper “memories” of their previous lives because they are closer to them, in a cosmic sense, and they details of those lives have not yet been obliterated by their new lives.

Here are four remarkable cases in which children have specific knowledge of people, places, and events – including their own deaths – that they could not possible have known…

When he was just three years old, Carl Edon of Middlesbrough, England began telling his parents of memories he had as a member of the Luftwaffe, the German air force during World War II. The memories persisted throughout Carl’s life, and so strong were these feelings of this past life that his parents, who were naturally skeptical of Carl’s claims, grew weary of hearing about it. So did his school friends, who began to tease Carl about his supposed reincarnation.

Carl even knew how he died in his past life. His plane, he claimed, was shot down over Middlesbrough and he was killed, with particular severe damage to his right leg. Carl believed that a birthmark at the top of his right leg was evidence of this past life injury.

All of Carl’s claims could easily have been dismissed as a young man’s fantasy… until a discovery seemed to verify his story.

In 1997, two years after Carl’s death (he was brutally murdered by a friend in 1995 at the age of 22), the wreckage of a German bomber was found — ironically, just a few hundred yards from where Carl had been stabbed to death.

What workers found in the plane debris was astonishing. The plane apparently had been downed by anti-aircraft fire, and the remains of one of the bodies found was that of Heinrich Richter, a turret gunner. Richter’s right leg had been detached in the crash.

All of this could just add up to a number of amazing coincidences, but one more item dug up by researchers will cause one to wonder: a photograph of Heinrich Richter. Placed side by side with a photo of Carl Edon (see photos above), one would be hard pressed to deny the striking resemblance between the two men.

Luke Ruehlman began telling his mother about his past life almost since he was able to talk at the age of two. According to his mom, Erika, Luke claimed that he was once a woman named Pam, who was forced to leap to her death from a burning building.

Now five, Luke doesn’t talk about his past life anymore, but when younger he would make such proclamations as, “When I was a girl, I had black hair,” and “I used to have earrings like that when I was a girl.”

Luke even recalled the process of his reincarnation, Erika says. “I died,” he told her. “I went up to heaven, and I saw God, and he pushed me back down and when I woke up, I was a baby and you named me Luke.”

Curious about the specifics in Luke’s story, Erika researched any case of a woman named Pam who leapt to her death from a building afire. She found a 1993 case involving a 30-year-old African American woman named Pamela Robinson, who died when the Paxton Hotel in Chicago caught fire.

Erika believes Pamela Robinson could be the past life her son recalled.

As a child, Ruprecht Schultz often exhibited behavior that deeply disturbed his parents when he became depressed. He would form his hand in the shape of a gun, press it against his temple and say, “I shoot myself.” He repeated this so often that his parents had to explicitly forbid him from doing it.

As he grew into adulthood in the late 19th century and early 20th century in Berlin, Germany, Ruprecht displayed an aptitude for business and started his own laundry and delivery service which quickly grew to employing as many as 200 people.

Ruprecht was 51 when World War II began in 1939 and he was assigned by city authorities to watch for fires. But something strange began to occur when Ruprecht would sit and review the account books for his business. He began to have flashes of a past life. You were in this situation once before, he would think to himself.

“I could see how I looked then,” he said in a recorded statement. “I was wearing a high collar and formal clothing. I had come from a ceremony on a special day. My business was finished. An employee had run off with the money — embezzled it and absconded. So I sat down with the account books and could see that there was no future. It was all over. Then I was in a room by myself and put a bullet into my head at the right temple. You would call these images clairvoyance, but for me, they are memories.”

As these memories intensified, Ruprecht could also recall the nature of his past-life business. “Since my earliest years,” he said, “I have had a distinct impression, with various details, that I was in a previous life somehow connected with ship building or shipping and that I shot myself.

I knew that it occurred in an old small or middle-sized seaport, and is seemed to me later and more clearly that this seaport was Wilhelmshaven. As for the date of these events — the suicide of the person I was — it has seemed to me that it would have been around 1885.”

Eager to verify these visions, Ruprecht wrote to the municipal authorities of several German seaside towns, including Wilhelmshaven, to see if they had any record of a business involved in the timber shipping business who shot himself. An official from Wilhelmshaven responded with the name Helmut Kohler and referred him to his still-living son, Ludwig Kohler.

Through correspondence, Ludwig was able to verify many of the details of his father’s life that Ruprecht seemed to recall: his business, the embezzled money and betrayal by his employee, the failure of his timber shipping business, and Helmut Kohler’s eventual suicide by putting a gun to his temple and pulling the trigger.

Little Nazih Al-Danaf had some very worrisome things to say to his parents before he even reached the age of two. “I am not small, I am big. I carry two pistols,” he told his mother. “I carry four hand-grenades. I am qabadai [a fearless strong person]. Don’t be scared by the hand-grenades. I know how to handle them. I have a lot of weapons. My children are young and I want to go and see them.”

These were words and concepts that Nazih’s parents could not imagine that he would have a grasp of. He even displayed an interest in cigarettes and whiskey, and spoke of a one-handed friend who was also a mute. He said he died from gunshots and even recalled the ride to the ambulance to the hospital.

Nazih told his parents he wanted to visit his hometown of Qaberchamoun, Lebanon, which was a little over ten miles from where they lived. His family had never been there, however, and didn’t know anyone who lived there.

When he was six years old, Nazih’s parents finally took him to Qaberchamoun. Little Nazih gave his father specific directions on where to go, which roads and turns to take. There they met a man, Kamal Khaddage, and explained what the boy had told them. Kamal said that it sounded like they were describing his father, Fuad Assad Khaddage, who died many years earlier.

This led to Nazih meeting the widow of Fuad Assad Khaddage, and she tested the boy with specific questions. “Who built the foundation of this gate at the entrance of this house?” she asked the small boy. “A man from the Faraj family,” Nazih replied. He was correct. She also verified many other details by questioning the boy that left no doubt about his past life identity.

When Nazih was shown a picture of Fuad Assad Khaddage and was asked who it was, he said, “This is me. I was big but now I am small.”

ARTICLE BY   By Stephen Wagner
Posted by arclein at 12:00 AM