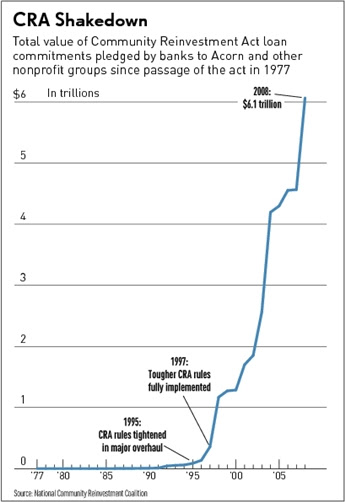 I understood a long time ago that there was something queer about the 2008 collapse, but had never put it all together.  I had enough information to run but not enough to understand who was been so stupid.   This spells out just how far wrong it all went.


Greed bought the politicians to commit treason.  Once in motion it was impossible to halt the train wreck.  It is important to observe that Bush did not sit idly by either.  Add in the Clinton repeal of the law imposing separation of institutions by type and he faced a horse that had already left the stable and no place to stick a veto.


Astonishingly these folks then elected Obama who essentially put an umbrella over this whole charade.


Essentially the Democrats destroyed the ecomnomic viability of their own electoral base.. .

A new study from the widely respected National Bureau of Economic Research released this week has confirmed beyond question that the left's race-baiting attacks on the housing market (the Community Reinvestment Act--enacted under Carter, made shockingly more aggressive under Clinton) is directly responsible for imploding the housing market and destroying the economy.

The study painstakingly sorted through failed home loans that caused the housing market collapse and identified an overwhelming connection between them and CRA mortgages.

-President Bush went to Congress repeatedly for years warning them that Fannie Mae and Freddie Mac were going to destroy the economy (17 times in 2008 alone). Democrats continuously ignored him, shut down his proposals along party lines and continued raiding the institutions for campaign contributions on their way down.

-John McCain also co-sponsored urgently critical reforms that would have prevented the housing market collapse, but Democrats shut that down as well, along party lines, and even openly ridiculed anyone who suggested reforms were necessary...to protect their taxpayer-funded campaign contributions as the economy raced uncontrollably toward the cliff.

-No one was making bad loans to unqualified people until Democrats came along and threatened to drag banks into court and have them fined and branded as racists if they didn't go along with the left's Affirmative Action lending policies...all while federally insuring their losses. Even the New York Times warned in the late 1990s that Democrats continuing to force banks into lowering their standards would lead to this exact catastrophe.

-Democrats themselves are even on the record personally helping sue one lender (Citibank) into lowering its lending standards to include people from extremely poor and unstable areas, which even one of the left's favorite blatantly partisan "fact-checkers," Snopes, admits (while pretending to 'set the record straight').

-Even The New York Times admitted that there is "little evidence" of any   NO connection between the "Republican" deregulation measures Democrats blame, like the Gramm-Bleach-Liley Act (signed into law by a Democrat), and the collapse of the housing market.

But non-Fox media have spent years deliberately and relentlessly inoculating people against the facts, training them to mindlessly blame Bush for being in charge when Democrat policies destroyed the economy. So here we sit, to this day, still watching Democrats excuse and shrug off endless economic failures, illegal government takeovers and utter national bankruptcy with zero accountability.

The War On Banks

Democrats and the media insist the Community Reinvestment Act, the anti-redlining law beefed up by President Clinton, had nothing to do with the subprime mortgage crisis and recession.

But a new study by the respected National Bureau of Economic Research finds, "Yes, it did. We find that adherence to that act led to riskier lending by banks."

Added NBER: "There is a clear pattern of increased defaults for loans made by these banks in quarters around the (CRA) exam. Moreover, the effects are larger for loans made within CRA tracts," or predominantly low-income and minority areas.

To satisfy CRA examiners, "flexible" lending by large banks rose an average 5% and those loans defaulted about 15% more often, the 43-page study found.

The strongest link between CRA lending and defaults took place in the runup to the crisis — 2004 to 2006 — when banks rapidly sold CRA mortgages for securitization by Fannie Mae and Freddie Mac and Wall Street.

CRA regulations are at the core of Fannie's and Freddie's so-called affordable housing mission. In the early 1990s, a Democrat Congress gave HUD the authority to set and enforce (through fines) CRA-grade loan quotas at Fannie and Freddie.

It passed a law requiring the government-backed agencies to "assist insured depository institutions to meet their obligations under the (CRA)." The goal was to help banks meet lending quotas by buying their CRA loans.

But they had to loosen underwriting standards to do it. And that's what they did.

"We want your CRA loans because they help us meet our housing goals," Fannie Vice Chair Jamie Gorelick beseeched lenders gathered at a banking conference in 2000, just after HUD hiked the mortgage giant's affordable housing quotas to 50% and pressed it to buy more CRA-eligible loans to help meet those new targets. "We will buy them from your portfolios or package them into securities."
She described "CRA-friendly products" as mortgages with less than "3% down" and "flexible underwriting."

From 2001-2007, Fannie and Freddie bought roughly half of all CRA home loans, most carrying subprime features.

Lenders not subject to the CRA, such as subprime giant Countrywide Financial, still fell under its spell. Regulated by HUD, Countrywide and other lenders agreed to sign contracts with the government supporting such lending under threat of being brought under CRA rules.

"Countrywide can potentially help you meet your CRA goals by offering both whole loan and mortgage-backed securities that are eligible for CRA credit," the lender advertised to banks.

Housing analysts say the CRA is the central thread running through the subprime scandal — from banks and subprime lenders to Fannie and Freddie to even Wall Street firms that took most of the heat for the crisis.

Obama officials, who are cracking the CRA whip anew against banks, insist the law played no role in the mortgage meltdown.

"CRA loans performed substantially better than subprime loans, and the CRA has been around for decades," argued senior Justice Department official Thomas Perez.

While the 1977 law was passed 30 years before the crisis, it underwent a major overhaul just 10 years earlier. Starting in 1995, banks were measured on their use of innovative and flexible" lending standards, which included reduced down payments and credit requirements.

WaMu CEO Kerry Killinger has blamed the CRA for his bank's overexposure to risky loans. He said he wanted to tighten lending requirements, but "such measures would have presented other issues such as the company's CRA rating and its commitment to serving its (low-income and minority) customers and communities."

A wave of these securitizations began in 1997, which also happens to mark the start of the housing bubble.