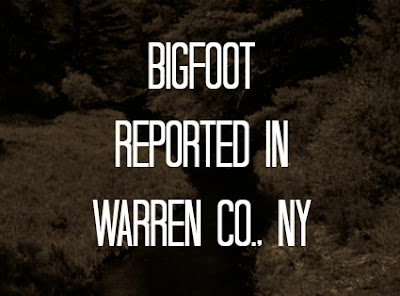 One of the best reports i came across over ten years ago was of a Big Foot stepping from behind cover to hurl a throwing stone directly at a deer standing in a pond of water.  It then came forward to grab the downed deer and also sling it over its shoulder.


We now have a really complete picture of the big foot life way.  It is primitive and similar to that of humanity long before we seriously mastered tools of any significance.  The art of the throwing stone goes back millions of years.

Thursday, June 25, 2015
http://www.phantomsandmonsters.com/2015/06/bigfoot-reported-in-warren-county-ny.html
I received the following report last evening. The location is about 15 miles west of Whitehall, NY....across Lake George. I don't know the overall area that well and not sure how much Bigfoot activity has been reported there recently:

I was on my way to work and driving north bound. It was about 6AM and still dark. I was approaching Lake Ridge Rd when I noticed a tall Bigfoot walking from the road, then into the woods to my right. It had a deer draped over it's left shoulder. I know this will seem crazy but I could swear that this Bigfoot was over 9 ft. The reason I know is that I came back that afternoon and measured some landmarks, including a road sign. I've never heard of one these getting that tall. It was covered in dark brown hair, almost black. I didn't get a direct look at the face, but it looked like very thick hair covering most of the body. To be honest, it was not that bulky, unless it was the direction in which I looked at it. Kind of reminded me of a Star Wars Wookie in the body and legs.

I noticed later that afternoon that there was a lot of blood and some tissue on the west shoulder of the road, so I believe it was collecting roadkill when I saw it. I looked for foot prints but the mud was frozen.

I walked across the road and into the woods where the Bigfoot entered. I didn't see any blood drops or tracks. Too bad that there was no snow on the ground at that time. I walked almost a mile until I came up to the edge of yard with a fence. I turned around and made my way back.

As I got back to the road, a lady in an SUV pulled up to the stop sign and asked what I was doing. I told her what I had seen early in the morning. She told me that a she had seen a younger Bigfoot walking through the woods a few hundred yards north from there back in 2008. She also said that some Bigfoot hunters had been in the area in 2008, but never heard if anything had been seen.

I had heard of sightings in Whitehall, NY several years ago, but that's the only mention of Bigfoot I am aware of around here.

I've been back to the area a few times since December, but haven't come across any evidence. In April, my brother and I were a few miles from that location working at a house on Trout Lake Rd. It was starting to get dark in the late afternoon when we heard a sustained shrilling sound coming from the north. Neither of us had heard that before, and we both are in the woods a lot. If that was a Bigfoot, then I believe that they are in the vicinity.

I'm going back to the area during my vacation week in July - maybe spend the night in the woods. I now have some trail cams and voice recorders I plan to place in a nearby gully which I think Bigfoot are using to travel. Any suggestions? I'm new to this, so I feel this is a good opportunity to get my feet wet.

NOTE: I sent Gil a list of known local Bigfoot researchers...and that he may want to contact one of them for some advice. Lon
Posted by arclein at 12:00 AM