Desalination Technology Goes Off the Grid in India 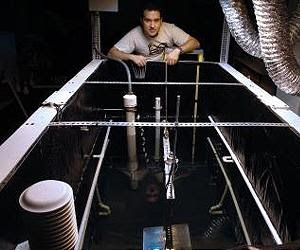 First of, the cost of solar power keeps dropping.  That means it is no longer the biggest single outlay.  As well, hardware can even be improvised once power is available.  Thus it has become practical to set up a crude desalination system anywhere.

This will now easily roll out as well thanks to the  explosion of local know how supported by the internet.


So yes, sweet water can be made and cheap enough as well.

Some 60 percent of groundwater in India has a notable saltiness, not ideal for drinking. Though not unhealthy, the water can corrode pots and pans in addition to putting a pucker on the faces of unsuspecting drinkers.

Desalination can solve the problem, but the process of removing the salt from water isn't cheap. Economically, it only makes sense to desalinize water on a large scale. A number of companies have designed desalination devices for larger municipalities. But these devices require electricity.

For many towns in rural India, there isn't enough electricity nor enough people to make electric-powered desalination economically viable.

Researchers from MIT, however, have devised a solution -- solar-powered desalination.

Natasha Wright, a mechanical engineer at MIT, has designed a village-scale desalination system that's powered by the sun. The technology uses electrodialysis, which uses electric potential to pull salt from the water. In addition to removing the salt, the system also kills off biological contaminants using ultraviolet light.

Wright is currently focusing on deploying the technology in India, but she first tested in the United States. For some isolated farms and ranches, municipal water pipes are hard to come by -- and expensive. These places rely heavily on well water, but the saltiness of groundwater can even be too much for livestock. Sun-powered desalination works here, too.

"It's useful to install a small-scale desalination system where people are so spread out that it's more costly to pump in water from a municipal plant," Wright said in a recent press release. "That's true in India and that's also true in the U.S."
Posted by arclein at 12:00 AM