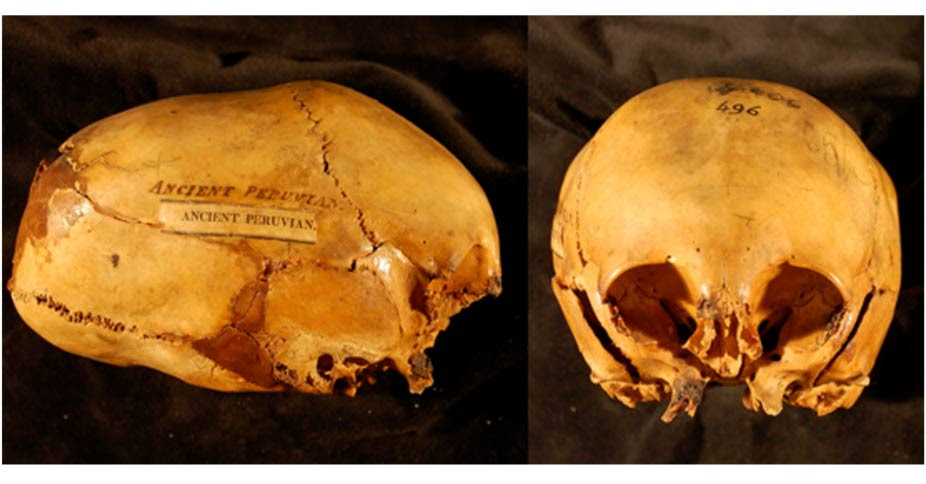 My recent post regarding what appeared to be foetus of an elongated skull can now be resolved as part of a long history of mummies out of Peru that has been ignored for decades.  This is no longer a case of missing biological evidence.  It is a case of deliberate negligence


Whatever comes of all this, i have scant doubt that they are not human.  The way the skull grows out is innovative and is not a plausible continuation of human skulls.  It is also likely that they are not Terran as well.


With that in mind, it is high time serious DNA work was conducted..

Elongated Skulls in utero: A Farewell to the Artificial Cranial Deformation Paradigm?


Elongated skulls are usually explained in terms of head-binding or artificial cranial deformation.


This paradigm emerged in the first half of the 19th century as a way of explaining unusual skulls discovered in Europe and South America, in places such as Crimea and Peru respectively. The main idea behind the head-binding paradigm is that ALL elongated skulls are a result of intentional modification of the form of the skull by applying external pressure. In other words, ALL elongated skulls are merely deformed ‘normal’ skulls similar to those of modern humans.

Elongated Skull from Crimea and other parts of the worlds, Baer 1860

What evidence could challenge this paradigm? Right – the existence of fetuses with elongated skulls, i.e. evidence that such skulls already had an elongated shape in utero, before any head-binding was possible. Do we have such evidence? Yes, we do! Moreover, this evidence has been known to the academic community for over 163 years!


Rivero and Tschudi in Peruvian Antiquities (1851 Spanish, 1853 English) argue that the protagonists of the artificial cranial deformation hypothesis are mistaken, since they had only considered the skulls of adults. In other words, the hypothesis fails to take into account the skulls of infants and, most importantly, foetuses which had similar elongated skull shape.


It is worth quoting Rivero and Tschudi:


“We ourselves have observed the same fact [of the absence of signs of artificial pressure – IG] in many mummies of children of tender age, who, although they had cloths about them, were yet without any vestige or appearance of pressure of the cranium. More still: the same formation of the head presents itself in children yet unborn; and of this truth we have had convincing proof in the sight of a foetus, enclosed in the womb of a mummy of a pregnant woman, which we found in a cave of Huichay, two leagues from Tarma, and which is, at this moment, in our collection [my emphasis – IG].

Lithograph by D. Leopoldo Mueller from the Spanish 1851 Edition of Peruvian Antiquities


Professor D’Outrepont, of great Celebrity in the department of obstetrics, has assured us that the foetus is one of seven months’ age. It belongs, according to a very clearly defined formation of the cranium, to the tribe of the Huancas. We present the reader with a drawing of this conclusive and interesting proof in opposition to the advocates of mechanical action as the sole and exclusive cause of the phrenological [i.e. cranial – no negative connotation at that time - IG] form of the Peruvian race.

The same proof is to be found in another mummy which exists in the museum of Lima, under the direction of Don M. E. de Rivero.


Elongated skulls of infants were available to European researchers as early as 1838. The skulls of “Ancient Peruvians” were also in Samuel Morton’s collection in Philadelphia.


Two elongated infant skulls, which Rivero and Tschudi mention in Peruvian Antiquities were discovered and brought to England by Captain Blankley and presented to the Museum of the Devon and Cornwall Natural History Society in 1838. Dr. Bellamy provided a detailed description of these skulls in 1842, suggesting that they belonged to two infants – male and female, few months and about a year old respectively. He indicated substantial structural differences from those of “normal” infant skulls and the absence of the signs of artificial pressure, as well as their similarity to other “Titicacan” skulls in the Museum of the College of Surgeons in London.

Lithographs of the skulls by J. Basire from Bellamy's article (1842) and Mark Laplume's artistic reconstructions


The evidence of elongated skulls present in fetuses and children had lead Rivero and Tschudi, Bellamy, Graves and others to a hypothesis that these skulls belonged to an extinct race of people, who left their legacy on the populations who succeeded them as a practice of artificial cranial deformation. I discuss this hypothesis in more detail in The Looming Collapse Of The Artificial Cranial Deformation Paradigm. Part 1. Un/Born With Elongated Head and Part 2. Naturally Elongated.


The question now is how it happened that the cranial deformation paradigm became so prevalent? The answer to a large extent consists in the authority of Morton’s expert opinion and his extensive collection of skulls, which is now located in the University of Pennsylvania Museum of Archaeology and Anthropology. His influence was significant enough at the time to close the debate on elongated skulls for the next century and a half; until independent researchers, and I would like to mention Robert Connolly (who popularized elongated skulls in mid 1990s) and Brien Foerster, in particular, started to raise questions about the validity of the cranial deformation hypothesis by locating and showing elongated skulls to the public interested in finding out the true story of human origins.


In Crania Americana Morton offered a description of peculiar elongated skulls which differed from the elongated skulls produced by various artificial means. He suggested that the territory of Peru and Bolivia was previously inhabited by the race of “Ancient Peruvians”.


“I have been so fortunate as to have the examination, in my own and other collections, of nearly one hundred Peruvian crania: and the result is, that Peru appears to have been at different times peopled by two nations of differently formed crania, one of which is perhaps extinct, or at least exists only as blended by adventitious circumstances, in various remote and scattered tribes of the present Indian race. Of these two families, that which was antecedent to the appearance of the Incas is designated as the Ancient Peruvian, of which the remains have hitherto been found only in Peru, and especially in that division of it now called Bolivia.”


Although Ancient Peruvians had naturally elongated skulls, Morton concluded that they further tried to articulate this feature by head binding. This is an interesting observation in itself, since it raises a question why a race with naturally elongated skulls would aspire to further elongate them. Perhaps they were also preceded by a race whose skulls were even more elongated?

Morton Collection, Skull #1277, University of Pennsylvania Museum of Archaeology and Anthropology, the Open Research Scan Archive at Penn, and Janet Monge and P. Thomas Schoenemann; image in front from Meigs, 1857


Subsequently, Morton changed his opinion and started to consider all elongated skulls as an exclusive result of head-binding. However, in light of Rivero and Tschudi’s fetuses with elongated skulls, as well as hundreds of infant and children elongated skulls which are now available to researchers, it is necessary to open the debate about “Ancient Peruvians” and their counterparts (see my interview with Mark Laplume) in other part of the world.


Accordingly, it is necessary to revisit Morton’s original encounter with elongated skulls. This is how he originally described cranial features of Ancient Peruvians:


“[The head] is small, greatly elongated, narrow its whole length, with a very retreating forehead, and possessing more symmetry than is usual in skulls of the American race. The face projec ts, the upper jaw is thrust forward , and the teeth are inclined outward . The orbits of the eyes are large and rounded, the nasal bones salient, the zygomatic arches expanded; and there is a remarkable simplicity in the sutures that connect the bones of the cranium.” 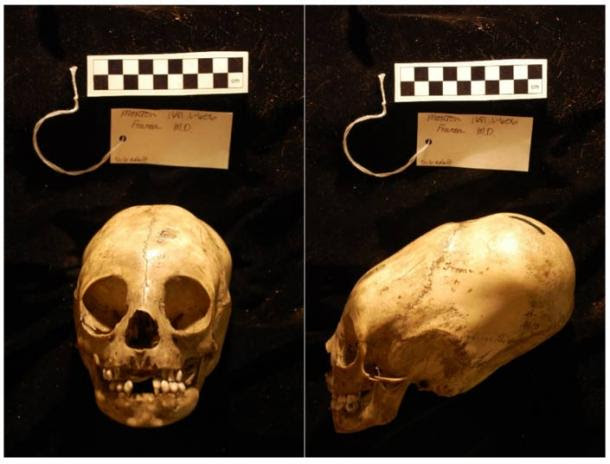 
Given that there are at least two mummies containing foetuses with elongated skulls, in addition to hundreds of infant and children with elongated crania (see Children Of The ‘Elongated Skulls’ As A Challenge To The ‘Artificial Cranial Deformation’ Theory and RootRaceResearch), a priority task for the academic community would be to identify the physical location of the mummies and proceed to DNA analysis, which is currently done by independent researcher and enthusiasts who lack infrastructural and financial resources and face significant obstacles in obtaining necessary permissions. It is worth noting that we deal with very old DNA, the analysis of which is a complex and expensive procedure.

Von Baer, Karl Ernst. Makrokephalen im Boden der Krim und Österreichs. St. Petersburg. 1860.
Bellamy, P. F. A brief Account of two Peruvian Mummies in the Museum of the Devon and Cornwall Natural History Society. in ‘Annals and Magazine of Natural History’. Vol. X. October 1842.
Graves, Robert J.  Remarkable Skulls Found in Peru. No.15 of the Dublin Journal of Medical and Chemical Sciences. 1835.
Meigs, J. Aitken. Catalogue of Human Crania in the Collection of the Academie of Natural Sciences of Philadelphia: Based Upon the Third Edition of Dr. Morton's " Catalogue of Skulls". Philadelphia. 1857.
Morton, Samuel George. Crania Americana; or, A Comparative View of the Skulls of Various Aboriginal Nations of North and South America. To which is Prefixed an Essay on the Varieties of the Human Species. London. 1839.
Rivero, M.E., Tschudi, J.D. Antigüedades peruanas. Vienna, 1851 (Spanish). Rivero, M.E., von Tschudi, J.J. Peruvian antiquities. New York, 1853 (English).
By Igor Gontcharov
Posted by arclein at 12:00 AM