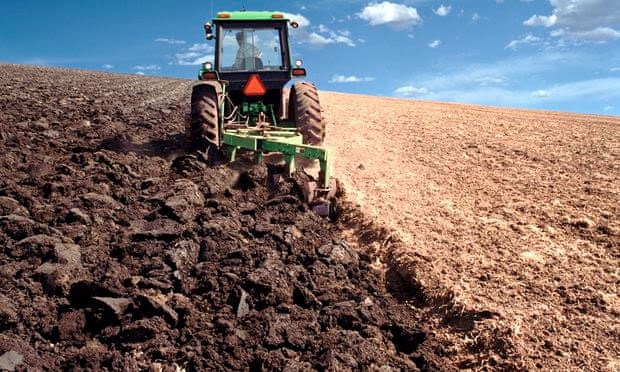 Current methods are simply unsustainable but also easily replaced by superior husbandry even when the soil is actually wrecked.  That has begun but is still in thevearly stages.  Yet simply perusing work on permaculture shows us thjat we actually have all the room in the world.

Ending industrial farming is a regulatory problem and also an economic one as increasing consumer demand drives farming out of these methods.

In the end 100 billion will live on earth all maintaining incredibly productive and sustainable gardens.  This is a mere interlude between primitive agriculture and that world.  None if the past was ever particularly kind to soils and that needs to be remembered.
.
We’re treating soil like dirt. It’s a fatal mistake, as our lives depend on it

Imagine a wonderful world, a planet on which there was no threat of climate breakdown, no loss of freshwater, no antibiotic resistance, no obesity crisis, no terrorism, no war. Surely, then, we would be out of major danger? Sorry. Even if everything else were miraculously fixed, we’re finished if we don’t address an issue considered so marginal and irrelevant that you can go for months without seeing it in a newspaper.

It’s literally and – it seems – metaphorically, beneath us. To judge by its absence from the media, most journalists consider it unworthy of consideration. But all human life depends on it. We knew this long ago, but somehow it has been forgotten. As a Sanskrit text written in about 1500BC noted: “Upon this handful of soil our survival depends. Husband it and it will grow our food, our fuel and our shelter and surround us with beauty. Abuse it and the soil will collapse and die, taking humanity with it.”

To keep up with global food demand, the UN estimates, 6m hectares (14.8m acres) of new farmland will be needed every year. Instead, 12m hectares a year are lost through soil degradation. We wreck it, then move on, trashing rainforests and other precious habitats as we go. Soil is an almost magical substance, a living system that transforms the materials it encounters, making them available to plants. That handful the Vedic master showed his disciples contains more micro-organisms than all the people who have ever lived on Earth. Yet we treat it like, well, dirt.


The techniques that were supposed to feed the world threaten us with starvation. A paper just published in the journal Anthropocene analyses the undisturbed sediments in an 11th-century French lake. It reveals that the intensification of farming over the past century has increased the rate of soil erosion sixtyfold.

Another paper, by researchers in the UK, shows that soil in allotments – the small patches in towns and cities that people cultivate by hand – contains a third more organic carbon than agricultural soil and 25% more nitrogen. This is one of the reasons why allotment holders produce between four and 11 times more food per hectare than do farmers.

Whenever I mention this issue, people ask: “But surely farmers have an interest in looking after their soil?” They do, and there are many excellent cultivators who seek to keep their soil on the land. There are also some terrible farmers, often absentees, who allow contractors to rip their fields to shreds for the sake of a quick profit. Even the good ones are hampered by an economic and political system that could scarcely be better designed to frustrate them. 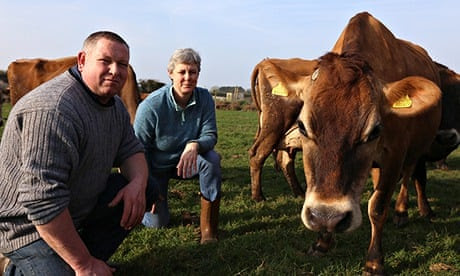 Why are organic farmers across Britain giving up?

This is the International Year of Soils, but you wouldn’t know it. In January, the Westminster government published a new set of soil standards, marginally better than those they replaced, but wholly unmatched to the scale of the problem. There are no penalities for compromising our survival except a partial withholding of public subsidies. Yet even this pathetic guidance is considered intolerable by the National Farmers’ Union, which greeted them with bitter complaints. Sometimes the NFU seems to me to exist to champion bad practice and block any possibility of positive change.

Few sights are as gruesome as the glee with which the NFU celebrated the death last year of the European soil framework directive, the only measure with the potential to arrest our soil-erosion crisis. The NFU, supported by successive British governments, fought for eight years to destroy it, then crowed like a shedful of cockerels when it won. Looking back on this episode, we will see it as a parable of our times.

Soon after that, the business minister, Matthew Hancock, announced that he was putting “business in charge of driving reform”: trade associations would be able “to review enforcement of regulation in their sectors.” The NFU was one the first two bodies granted this privilege. Hancock explained that this “is all part of our unambiguously pro-business agenda to increase the financial security of the British people.” But it doesn’t increase our security, financial or otherwise. It undermines it.

The government’s deregulation bill, which has now almost completed its passage through parliament, will force regulators – including those charged with protecting the fabric of the land – to “have regard to the desirability of promoting economic growth”. But short-term growth at the expense of public protection compromises long-term survival. This “unambiguously pro-business agenda” is deregulating us to death.

There’s no longer even an appetite for studying the problem. Just one university – Aberdeen – now offers a degree in soil science. All the rest have been closed down.

This is what topples civilisations. War and pestilence might kill large numbers of people, but in most cases the population recovers. But lose the soil and everything goes with it.

Now, globalisation ensures that this disaster is reproduced everywhere. In its early stages, globalisation enhances resilience: people are no longer dependent on the vagaries of local production. But as it proceeds, spreading the same destructive processes to all corners of the Earth, it undermines resilience, as it threatens to bring down systems everywhere.

Almost all other issues are superficial by comparison. What appear to be great crises are slight and evanescent when held up against the steady trickling away of our subsistence.

The avoidance of this issue is perhaps the greatest social silence of all. Our insulation from the forces of nature has encouraged a belief in the dematerialisation of our lives, as if we no longer subsist on food and water, but on bits and bytes. This is a belief that can be entertained only by people who have never experienced serious hardship, and who are therefore unaware of the contingency of existence.

It’s not as if we are short of solutions. While it now seems that ploughing of any kind is incompatible with the protection of the soil, there are plenty of means of farming without it. Independently, in several parts of the world, farmers have been experimenting with zero-tillage (also known as conservation agriculture), often with extraordinary results.

There are dozens of ways of doing it: we need never see bare soil again. But in the UK, as in most rich nations, we have scarcely begun to experiment with the technique, despite the best efforts of the magazine Practical Farm Ideas.

Even better are some of the methods that fall under the heading of permaculture – working with complex natural systems rather than seeking to simplify or replace them. Pioneers such as Sepp Holzer and Geoff Lawton have achieved remarkable yields of fruit and vegetables in places that seemed unfarmable: 1,100m above sea level in the Austrian alps, for example, or in the salt-shrivelled Jordanian desert.

But, though every year our government spends £450m on agricultural research and development – much of it on techniques that wreck our soils – there is no mention of permaculture either on the websites of the two main funding bodies (NERC and BBSRC) or in any other department.

The macho commitment to destructive short-termism appears to resist all evidence and all logic. Never mind life on Earth; we’ll plough on regardless.

• A fully referenced version of this article can be found at Monbiot.com
Posted by arclein at 12:00 AM