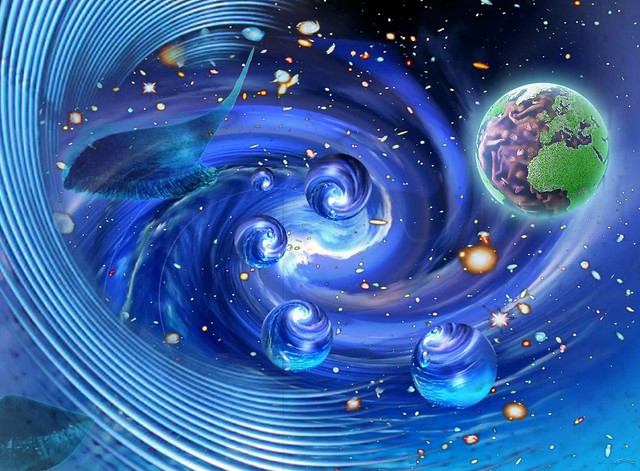 This introduces some interesting data that we want to pay attention to.   It is not particularly safe science either.  It is easy to imagine loosing one mind to something like this.  It is also a real mistake to assume that the data is basic as well.

It makes ample sense that our whole biology communicates directly across interstellar space  Questions arise but those must wait for a paradigm to emerge.  This at least establishes measurable effects that appear to reach across space.

In fairness, it is also unexpected in terms of what we think we understand as well about classical physics.

(1) that life is unique to Earth, and (2) that it is ubiquitous and aboundant throughout the universe. Hints about life elsewhere have been vague, including "organised elements" in meteorites, Martian infra-red spectra implying organic molecules, and the rare non-random radio signals whose reception was claimed by Tesla and Marconi. Yet a psychological readiness to accept extraterrestrial life has emerged to a most profound degree.

Divorced from its science-fiction background by Project Osma in the early 1960s, the topic is now formally called "communication with extraterrestrial intelligences" (acronym CETI). It was the subject of a top-level international conference held in September 1971 at the Byurakan Astrophysical Observatory in Soviet Armenia. The meeting was sponsored by the United States and Soviet Academies of Science. Similar interests prevail in private study groups both here and abroad.

Such programs must be welcomed in behalf of all mankind. For interstellar communication with other, highly advanced cultures might well determine human progress and survival. Thus, by inference, CETI emerges not only as the greatest adventure of mankind, but also poses a colossal challenge to systems engineering.

It remains an unfortunate fact that the majority of ambitious CETI programs continue to be aligned with the somewhat obsolete theories and hardware of radio astronomy. This is a serious drawback for several reasons:

(1) local inadequacies in interstellar communications technology and humanness are imposed upon a given extraterrestrial society (prompting it to lose interest in us), and

(2) we must be aware of the pre-eminent possibility that Type II or III civilizations -- whose worlds were old when Earth was young -- no longer employ electromagnetics-based communication technology due to obsolescence. The latter assumption is defensibly supported by the fact that terrestrial radio astronomy, in its 40 year long history as an electronics-based science, has failed to detect intelligent, non-Gaussian signals from deep space.

A somewhat better, more promising outlook has emerged as the result of experimental data obtained by our Institute. The inference has been drawn that interstellar communications signals, as presumably [11] are interchanged between peerage groups, are of a biological -- rather than electromagnetic -- nature. If verification tests continue to be affirmative, it will explain the aforementioned failure of traditional radio astronomy.

As one frequently encounters in exploratory research, our CETI-type data was incidental to other work and not sought for.

We operate a mobile field laboratory. One of our objectives is the development of non-polluting electronic alternatives to chemical fertilizers and pesticides used in agriculture.

Special investigations are directed at behavioural plant electrophysiology and bio-electric phenomena associated therewith. Viable organic transducers have been evolved, profiles of which were given in (1) ELECTRONICS WORLD, New York, October 1969, pp. 25-28, and in (2) ELECTRICAL REVIEW, London, June 2, 1972, pp. 780-81. Composite techniques have been adapted for field research in remote biological sensing (acronym: RBS), which allowed discovery of the following phenomena:

One October 29, 1971, 20:30 PDT, while conducting exploratory RBS experiments in Riverside County, California, our field instrumentation's organic transducer complex intercepted a train of apparently intelligent communications signals (tight spacing and discrete pulse intervals) while accidentally allowed to remain pointed at the constellation of Ursa Major during a short rest period. The phenomenon prevailed for somewhat over 33 minutes, approximately 30 minutes of which were recorded on tape when the audio monitor drew our attention.

A somewhat similar phenomenon was observed on April 10, 1972, 22:30 PDT, while conducting experiments in the Mojave Desert, California. Other, fragmentary interceptions have been made in the interim. The apparent signals, aside of seemingly growing weaker, appear to be transmitted at great intervals ranging from weeks to months, possibly years. A faint, coherent, binary-type phenomenon was noted during aural monitoring using equipment such as shown in the accompanying illustration. Intervals between rapid series of pulse trains ranged from approximately 3 to 10 minutes. It is likely that other phenomena have escaped detection, since lack of special facilities and resources precludes routine monitoring at this time.

Because our equipment is impervious to electromagnetic radiation and found free of internal anomalies, the tentative conclusion of biological-type interstellar communications signals have emerged. We also entertain the possibility of an emergency transmission (here directed at peerage societies only), since relatively large power levels of given makeup are required to overcome bioelectric impedances and galvanic network losses inherent in our developmental instrumentation. A two-way transceiving capability has not yet been achieved.

Data contained in our October '71 tape was accrued via analog DC-to-AC conversion techniques. Here, fluctuating DC signals, as generated by organic semi-conductors in the-transducer complex during Signal incidence, are made available for direct audio recordings by changing DC products into variable-pitch audio patterns. As is customary in an analytical telemetry, a local pilot tone was automatically injected into the tape for detecting mechanical tape-speed variations and/or electronic malfunctions, if any. Provisions have been made for synchronous electromagnetic interference monitoring. (See illustration)

As a mere audio presentation, the instrumentation tape is unpleasant to listen to. However, as many reviewers concede, a fascinating degree of enchantment tends to emerge after the tape has been played back three or four times, typically over a period of weeks. We ascribe this to psycho-physical adaptation, since individual acuities to the dominant pilot or control tone tend to-be attenuated when playbacks are repeated. The audio-frequency envelope peaks out at approximately 5,000 Hz and is fairly uniform. The tape contains a short, incremental series of deep, harmonious oscillations resembling nonsense chatter or background modulations. An intelligent character of the overall pulse train is applied by discrete spacing patterns, apparent repetitions of sequences, and highly attenuated Gaussian noise. Arrangements are being made for computer analysis.

Coding formats and nature of signal-emanating domain remain unknown. Reports of similar observations made elsewhere are being solicited.

To preserve physical evidence of what might well be an extremely important historical event for generations yet to be born, a copy of the October '71 tape has been deposited with the Scientific archives of the Smithsonian Institution, Washington, D.C.

A biodynamic field station designed for interstellar signal interception is shown above. Principal components are: Organic transducers housed in the TRANSDUCER CHAMBER (4), optical sector recording aids comprised of a NEWTONIAN TELESCOPE (2) and CAMERA (3), excitation and converter systems contained in the ELECTRONICS (9) package, an ELECTROMAGNETIC INTERFERENCE MONITOR (18), a clock-driven SYNCHRONOUS STAR MAP (22) for noting coordination of signal sources, and the OBSERVER'S NIGHT COT (15).

Legend:
1. Faraday Tube
2. Newtonian Telescope
3. Camera
4. Transducer Chamber
5. Sa. Slow-motion Controls
6. Ascension Drive(s)
7. Mounting
8. Field Recorder
9. Electronics
10. Tripod
11. Ground Spike
12. Remote Controls
13. Headphones
14. Headrest w/Pillow
15. Observer's Night Cot
16. Optical/Biodynamic Target Axes
17. Celestial Object/Domain
18. Electromagnetic Interference Monitor
19. RF Incidence
20. Mounting
21. Connectors
22. Synchronous Star Map w/ Illuminator
23. Mounting
* * *
We were on the same lecture program with Lawrence and had the opportunity to see and hear his illustrated talk on Interstellar Communication. This was at Esther Ellsworth's Understandorama at Claremont, California, May 6, 1973. He had the Organic Transducer with him, set up backstage, and showed us a green plant leaf pressed between two electrodes. We could hear the ‘pilot tone' on the audio equipment. A threat was made to the living leaf by bringing a lighted cigarette close to it. The change in the pilot tone was easily heard. Attempts to reproduce this Backster Effect by mental-means only -- that is just thinking of harming the leaf with a lighted cigarette -- were not quite so successful, though some plant response was heard.

Obviously this man is a competent technician, with tremendous capability for creating and adapting research equipment to his needs. He appears to be a true scientist, following the search for Truth wherever it might lead, regardless of what his preconceived ideas of life might be, here or in space! An example of this was his readiness to go ghost-chasing with his Organic Transducer in a haunted house in San Bernardino.

The wait for any phenomena to manifest was a long one, so long that Lawrence fell asleep, as he put it; Thus the scientist became a passive receiver along with his equipment. Only then of course could the spook manifest! The shrill increase in pilot tone signalled the presence of the intruder -- who was also in Lawrence's aura!! He didn't say this on the lecture stand but in [14] private conversation with us afterward he admitted that it took him a month to get rid of his unwelcome "eating companion". This was a powerful lesson in occult science, one we all have to learn somewhere along the line of evolution.

You can get in touch with Lawrence directly at his Ecola Institute, PO Box 3284, San Bernardino, Cal. 92413. He also teaches the science of Interstellar Communication at the Anchor College of Truth, 1775 Devore Road, San Bernardino, California 92407. Weekend classes in parapsychology, metaphysics and comparative religions are also being offered there throughout the summer. The College is to the left off Highway 395 on Devore Road, a couple miles north of San Bernardino.

Below is a picture of Lawrence's new Astrobiological research instrument, a radio-telescope with biological signal sensors, mounted on a pan-azimuth yoke assembly, "to scan the galaxy on a 24-hour basis."