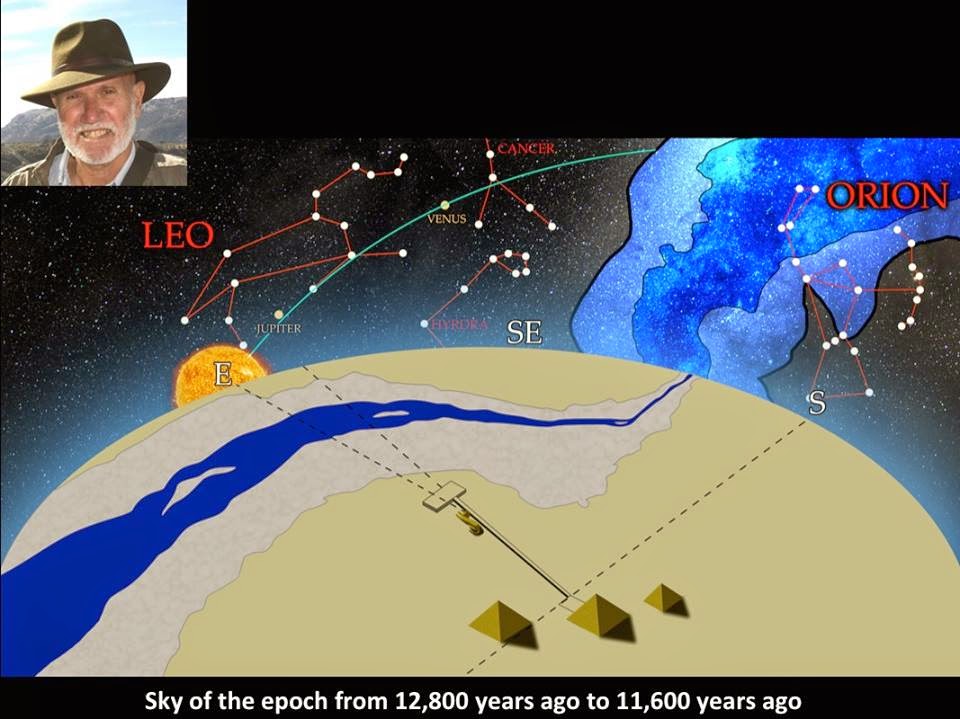 Zahi has used his political position to dictate what scholarship is allowed on the pyramids and this item shows him at his best.  It is so not scholarly that i now suspect any of his credentials.  The Orion conjecture is well accepted and his actual ignorance of Gobekli Tepe is unfathomable for an archeologist today.

The literature is now full of complaints regarding this chap almost to the point of suspecting he is no more than a poseur operating a license Raj.  With the Arab Spring, i had hoped we had seen the back of him but no such luck.

No one is of course going to investigate just how this chap got his position but he is certainly encouraging suspicions.

Self-styled "world's most famous Egyptologist" Zahi Hawass had agreed to participate today in what was billed and advertised as "the first open debate between the representatives of two completely different versions of history." Each of us was to give a one-hour presentation, followed by a debate in which the audience would join in with questions. In the event the debate never happened. Zahi refused to accept a coin-toss to decide the speaking order and insisted that I speak first. I agreed to this, despite the fact that the first speaker is at a slight disadvantage in any debate since he does not have the opportunity to hear the other speaker's presentation before giving his own. I was checking the focus on the slides in my PowerPoint presentation prior to giving my talk and I put up on the screen the image you see below which shows the Orion/Pyramids correlation and the Sphinx/Leo correlation at Giza in the epoch of 10,500 BC. Rightly and properly since the Orion correlation is Robert Bauval's discovery I included a portrait of Robert Bauval in the slide. As soon as Zahi saw Robert's image he became furiously angry, shouted at me, made insulting and demeaning comments about Robert, and told me that if I dared to mention a single word about Robert in my talk he would walk out and refuse to debate me. I explained that the alternative view of history that I was on stage to represent could not exclude the Orion correlation and therefore could not exclude Robert Bauval. At that, again shouting, Zahi marched out of the debating room. Frantic negotiations then took place off stage between the conference organisers and Zahi. Finally Zahi agreed to return and give his talk and answer questions from the audience, but he refused absolutely to hear or see my talk, or to engage in any debate with me. I therefore gave my talk to the audience without Zahi present (he sat in a room outside the conference hall while I spoke). When I had finished I answered questions from the audience. Then Zahi entered, gave his talk, answered questions from the audience and left. Some members of the audience did manage to record part of the scene of Zahi storming out of the conference room and we will be putting up a video clip of this tomorrow. Likewise during Zahi's Q&A he was asked a question about the 12,000-year-old megalithic site of Gobekli Tepe in Turkey and whether it had any impact on his assessment of the disputed age of the megalithic Great Sphinx of Giza. Unfortunately it appeared that Zahi was completely ignorant of the existence or implications of Gobekli Tepe so he was unable to answer the question, which he passed on to the moderator who also happened to be an Egyptologist. I did at that point have a brief opportunity to stand up and give my own point of view on Gobekli Tepe and on its implications for the age of the Sphinx. We will also be putting up a video clip of this Q&A session tomorrow. I had high hopes for this debate -- that it might bring about some sort of civil dialogue between alternative and mainstream views of history but I was sadly disappointed. Here is a link to a post I made yesterday, 24 hours before the "debate" which will help to put what happened today into context: