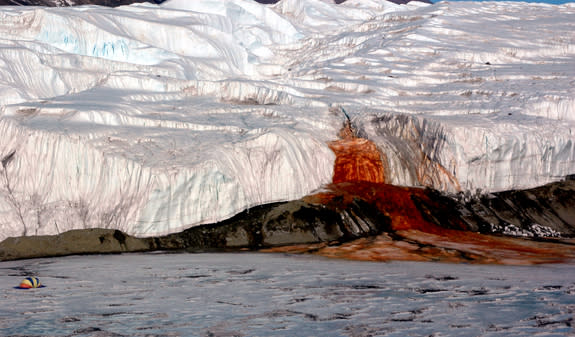 A bit of interesting science uncovered here and that is the persuasive nature of water underlying an Ice sheet.  In this case that water is also briny and that suggests that we have opened access to a  salt deposit and all this has led to chemistry producing the blood red signature.

This is not uncommon in the deserts and near iron deposits and other unique mineral ponds and this is not fed by a small local mineral deposit either, but something much larger as the work described here showed.

In the desert, the red associated with sulphide deposits is slightly different from that of the surrounding reds and has made prospecting prolific and even rewarding at times.  Unfortunately it easily uncovers every 'little' deposit as well..

Antarctica's Dry Valleys are the most arid places on Earth, but underneath their icy soils lies a vast and ancient network of salty, liquid water filled with life, a new study finds.

The Dry Valleys are almost entirely ice-free, except for a few isolated glaciers. The only surface water is a handful of small lakes. Inside the canyons, the climate is extremely dry, cold and windy; researchers have stumbled upon mummified seals in these gorges that are thousands of years old.

Yet there is life in this extreme landscape. For instance, bacteria living under Taylor Glacier stain its snout a deep blood red. The rust-colored brine, called Blood Falls, pours into Lake Bonney in the southernmost of the three largest Dry Valleys. The dramatic colors offer shocking relief to senses overwhelmed by the glaring white ice and dull brown rocks. [The 10 Driest Places on Earth]

Now, for the first time, scientists have traced the water underneath Taylor Glacier to learn more about the mysterious Blood Falls. In the process, the researchers discovered that briny water underlies much of Taylor Valley. The subsurface network connects the valley's scattered lakes, revealing that they're not as isolated as scientists once thought. The findings were published today (April 28) in the journal Nature Communications.

"We've learned so much about the dry valleys in Antarctica just by looking at this curiosity," said lead study author Jill Mikucki, a microbiologist at the University of Tennessee, Knoxville. "Blood Falls is not just an anomaly, it's a portal to this subglacial world."

Mikucki led an international research team that tested a newly developed airborne electromagnetic sensor in Taylor Valley. The flying contraption is a large, six-sided transmitter suspended beneath a helicopter. The instrument creates a magnetic field that picks up conductivity differences in the ground to a depth of about 1,000 feet (300 meters).

The researchers found liquid water underneath the icy soil in Taylor Valley, stretching from the coast to at least 7.5 miles (12 kilometers) inland. The water is twice as salty as seawater, the scientists reported. There is also briny water underneath Taylor Glacier as far back as the instrument could detect, about 3 miles (5 km) up the glacier, the researchers said. Eventually, the ice was too thick for the magnetic field to penetrate.

"This study shows Blood Falls isn't just a weird little seep," Mikucki told Live Science. "It may be representative of a much larger hydrologic network."

Water underneath Taylor Valley could have turned extremely salty in two ways: The brines could be due to freezing and evaporation of larger lakes that once filled the valley. Or, ocean water may have once flooded the canyons, leaving remnants behind as it retreated. The new findings will help researchers pin down the valley's aquatic history.

"I find it a very interesting and exciting study because the hydrology of the Dry Valleys has a complicated history and there's been very little data abut what's happening in the subsurface," said Dawn Sumner, a geobiologist at the University of California, Davis, who was not involved in the study.

Scientists are also intrigued by the new results because the Dry Valleys are considered one of the closest analogs to Mars that are located on Earth. Similar briny groundwater could have formed on Mars when the planet transitioned from having liquid water to a dry environment, Sumner said.

Finally, the findings may change views of Antarctica's coastal margins, Mikucki said. Now that scientists know Taylor Valley's groundwater seeps into the ocean, further research may reveal that coastal regions are important nutrient sources for Antarctica's iron-depleted seas, she said.
Posted by arclein at 12:00 AM