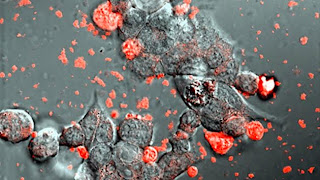 This is impressive and takes the whole idea of nano  technology a step forward.  As suggested it can be applied to a wider range of drugs as well. and this suggests exceptional targeting.

We are also reaching a critical milestone in the evolution of medicine itself.  The technology is maturing swiftly to allow intelligent drug application to the damaged tissue itself.  This will be huge and it will make obsolete the whole apparatus of commercial medicine.

This may not be too obvious to you, but our present system is based upon largely naive protocols for establishing 'scientific truth' that has failed us miserably in far too many cases.  We can now think of migrating to a system that allows all disease factors to be treated on a one on one basis with computer assistance to supply options.  Put another way, the library has now begun to expand rapidly and has be come far too large for conventional human memory to attempt to tackle..


Exosomes (shown in red) deliver catalase to protect neurons (shown in black) from the effects of Parkinson’s disease. (Source: University of North Carolina)

A natural enzyme called catalase may prove hugely significant in treating neurological disorders such as Parkinson's. These extremely potent antioxidants can tackle neuron-killing inflammation with an effectiveness unparalleled by small molecule drugs. But there's a problem, they are big. So big that getting them through the blood-brain barrier for delivery straight to the brain is nearly impossible.

But researchers have now discovered that loading them into tiny, naturally occurring bubbles allows them to sneak past the brain's defenses, pointing to the possibility of improved treatments for such conditions.

Led by Dr Elena Batrakova at the University of North Carolina, scientists extracted what are called exosomes from human immune cells. These microscopic bubbles have a role to play in conditions like AIDS and cancer, as they are hijacked to facilitate the spread of diseases around the body. In this case, the researchers were able to load them with catalase with the intent of sneaking the protein into the brain to battle the destructive molecules that cause inflammation.

"Exosomes are engineered by nature to be the perfect delivery vehicles for proteins and genetic material," says Batrakova. "Catalase is a huge protein, and it is almost impossible to deliver across the blood-brain barrier alone. We use exosomes from white blood cells, which are invisible to the immune system and easily interact and fuse with the blood-brain barrier to deliver their cargo across it."

The researchers say that a single molecule of catalase can neutralize around one million destructive molecules every second. Furthermore, the effect is ongoing because the catalase doesn't disappear as a result of the reaction.

Batrakova and her team are hoping to eventually develop personalized treatments that load a patient's own exosomes with catalase to allow entry to the brain. Ultimately, she says a nasal spray is the most likely delivery mechanism.

The research was published in the Journal of Controlled Release.
Posted by arclein at 12:00 AM