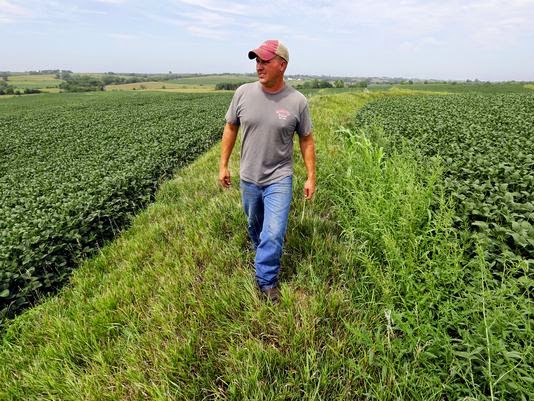 This is how the real crap hits the fan as one by one, farmers who are all well trained begin to master organic methods.  It will start as one field at a time and better methods will drive out poorer methods

This is also how it quickens.  Do it for two years and then take your numbers over to your banker to massively increase production. It does not take forty years.

At the same time Monsanto and its ilk are been driven from the market place.  This will at least quiet the propaganda..

WASHINGTON –When Justin Dammann enters his southwestern Iowa cornfield this month, the 35-year-old farmer will sow something these 2,400 acres have not seen in more than a decade — plants grown without genetically modified seeds.

The corn, which will head to a processor 20 miles down the road this fall, will likely make its way into tortilla shells, corn chips and other consumable products made by companies taking advantage of growing consumer demand for food without biotech ingredients.

For Dammann and other Midwest farmers, the burgeoning interest in non-GMO foods has increased how much they get paid to grow crops in fields once populated exclusively with genetically modified corns and soybeans. The revenue hike is a welcome benefit at a time when lower commodity prices are pushing farm income down to what's expected to be the lowest level in six years.

"We never really thought we would go back to (non-GMO). But the consumer, in my opinion, has sent a clear message that a certain percentage of our customers are willing to pay more for the non-GMO lines," Dammann said. "This non-GMO thing has seemed to take hold and gain a lot of traction."

Consumers, particularly on the West and East coasts, have demanded more GMO-free products because of health and safety concerns. And a number of major food companies have responded.

• General Mills announced last year it will no longer use bioengineered cornstarch and sugar cane for its original Cheerios.

• Chipotle Mexican Grill, the rapidly growing taco and burrito chain, is working to eliminate GMOs from its ingredients.

• And Whole Foods will require labeling of all products sold in its U.S. and Canadian stores by 2018 to indicate whether they contain genetically modified ingredients.
Last year, retail sales of products verified by the Non-GMO Project — the top U.S. certification organization — rose to $8.5 billion, compared with $1.2 billion three years earlier. Despite the torrid growth, it marked a fraction of the $630 billion in total supermarket sales in 2014 estimated by Progressive Grocer Magazine.

Tim Daley, an agronomist at Stonebridge Ltd., said the Cedar Falls company is getting flooded with calls from income-hungry farmers all over the Midwest looking for crops such as non-GMOs that could pay them a premium for their corn and soybeans.

Recently, a farmer growing a non-GMO soybean crop could get as much as $2 a bushel for soybeans and $0.35 a bushel for corn over the market price. Daley estimated growers could save $150 for each bag of corn seed they buy that lacks the traits embedded in genetically modified crops, a difference that could help a farmer reach profitability.

Stonebridge works with major food producers that manufacture energy bars, veggie burgers, soy milk and other products from non-GMO and other niche crops to ensure there will be enough grown by farmers to meet demand.

"Usually I don't turn people away, and I'm making the calls trying to find the acres," Daley said. But with lower grain prices "all my acres are filled, as far as my needs go, and I'm pretty much turning farmers away because the demand for the food-grade side hasn't increased as fast as the interest to produce them."

The overwhelming majority of corn and soybean crops in the Corn Belt, including Iowa, are grown using genetically modified crops.

Producers have embraced the crops — first commercially introduced in the United States in 1996 with the launch of Monsanto's Roundup Ready soybeans — because they boost yields and reduce the need for costly chemicals to rebuff bugs and weeds.

Last year, an estimated 97 percent of soybeans and 95 percent of corn grown in Iowa were from biotech seeds, figures that were both higher than the national average.

DuPont Pioneer, based in Johnston, Ia., said the agri-business giant best known for its genetically modified seeds hasn't wavered in its support for non-GMO products. Pioneer, which touts itself as the largest seller of non-GMO corn and soybean seeds, estimates about 4 percent of its soybean seed sales and 5 percent of its corn are non-GMO.

Exactly how many acres of non-GMO crops are grown in the United States for food is difficult to estimate because it is a specialized product and often contracted out to meet changing demand by food manufacturers. Further growth for non-GMO corn and soybeans could come if more livestock producers move toward raising chickens and hogs given GM-free feed. If it comes to fruition, those involved with non-GMO seeds are optimistic more land would go toward animal feed than is going for products found on supermarket shelves.

As much as 80 percent of packaged foods contain ingredients that have been genetically modified, according to the Grocery Manufacturers Association, which represents more than 300 food and beverage companies, including Kellogg and H.J. Heinz.

Some environmental and consumer groups have expressed doubt about the safety of genetically modified ingredients, even though the Food and Drug Administration, the National Academy of Sciences and other regulatory and scientific bodies have said there is no difference between genetically modified crops and their traditional counterparts.

Farmers across much of the Corn Belt are struggling to stay profitable as prices for maize, soybeans and other crops have plunged below the cost of production for some growers.

Wayne Hoener, vice president of sales for eMerge Genetics, said sales of the West Des Moines company's proprietary non-GMO seed products have tripled since 2012. This year, eMerge estimates about 30 percent of its sales are from new customers. Already, some of the company's 35 corn and soybean varieties are sold out.

"It's all about return on my acre for the producer," Hoener said. "If there is a contract that can pay them a premium for non-GMO, they are going to be very receptive to that in this day and age, particularly when commodity prices are lower."

Farm prices for corn have tumbled 46 percent from 2012, while soybeans have declined by about a third during the same period.

The plunge in commodity prices will push down farm income 32 percent this year to $73.6 billion, its lowest level since 2009, according to the Agriculture Department.

All this has spurred farmers to find new ways to offset lost income, making non-GMO and other niche crops even more attractive.

The seeds themselves cost less than their biotech counterparts, but a portion of that savings is lost because of the need to use more chemicals to protect crops. Some growers say they have little to lose by switching back to non-GMO crops because of growing resistance to weeds and pests that have developed to some herbicides, such as Monsanto's Roundup.

Dammann, who farms in Essex, said raising non-GMO corn does come with some added risk.

He not only must pay more for herbicides to combat corn borer and root worm insects, but the yields can sometimes be unpredictable if the weather is not ideal. Dammann said in some years, his yields were in line with biotech crops and in other years they fell short.

In 2012, when the Midwest was in its worst drought in decades, output was 30 percent less than his genetically modified corn, he said.

"Hopefully we deliver the right product and people are passionate to buy (GMO free) — because that is the direction we are moving," he said.