The Chart that Could Undo the Healthcare System 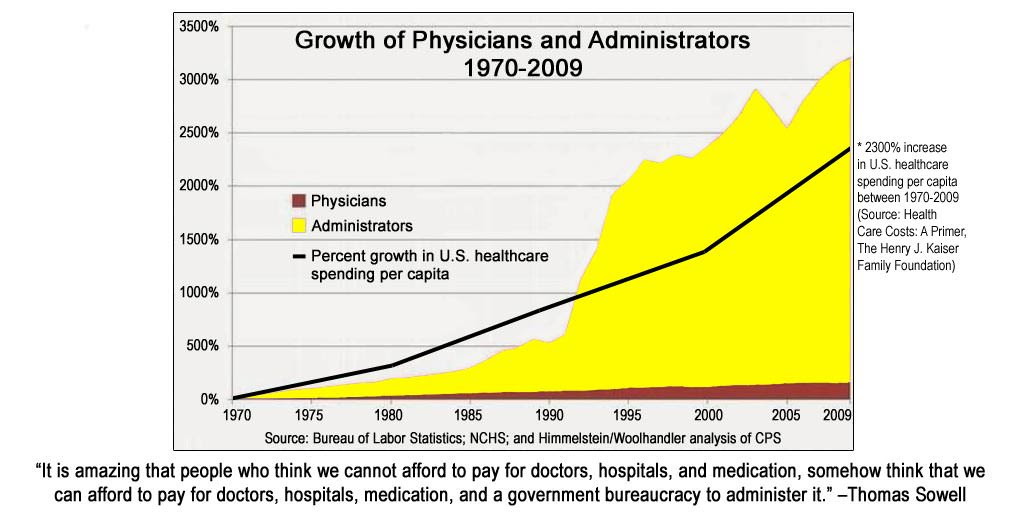 This has been obvious for a large number of years.  Fixing it has not been so obvious. The problem rolls back to the reality that a number of our economic sectors are effectively gamed monopolies that pay patronage to preserve their slice of the pie.


Repairing this is difficult.  The best news amazingly is that we now have a federal monopoly established with the taxpayer acting as a co payer in one way or the other.  This is change and that allows pressure to be brought to bear.  Recall that everywhere else is cheaper for better outcomes.


It will take time but not forever either.  As soon as the dust settles, statistics will emerge and the right questions will be asked as we compare our results to everyone else.  Since the majority of healthcare is not slightly unique to the USA, it will be easy to discover gamed sectors.


This has proven disastrous with municipal management, local police departments and education systems.  A regulatory regime needs to be thought out that stops local gouging.


.
The Chart that Could Undo the Healthcare System

This chart looks remarkably similar to a chart that tracks the growth of the administrative class in higher education. And that’s no accident. As the physician who shared the chart writes:

[The chart] outlines the growth of administrators in healthcare compared to physicians over the last forty years. And, it includes an overlay of America’s healthcare spending over that same time. Take a look at the yellow color. A picture is worth a thousand words, isn’t it?

You see, when you have that much administration, what you really have is a bunch of meetings. Lots of folks carrying their coffee from place to place. They are meeting about more policies, more protocols to satisfy government-created nonsense. But, this type of thing in healthcare isn’t fixing things. It’s not moving the needle.
What moves things is innovation.

Innovation, indeed. But it's not easy to innovate in stagnant, hyper-regulated, captured sectors.
In Tyler Cowen’s 2011 book the Great Stagnation, he argued that the areas that were stagnating the most are education, healthcare, and government. Writing about Cowen’s book in his Wall Street Journal blog, Kelly Evans says:

A particular challenge we confront is that our progress as a society — chiefly, in extending and improving lives — is now at a point in which it appears to be undercutting our potential for further advancement. Part of this, Mr. Cowen observes, stems from well-meaning efforts to do more with education, government, and health care that instead seem to have backfired and left us with noncompetitive institutions closer to failing us than to serving us well.

With respect to healthcare, this chart gives us an indication of why these efforts are backfiring: The more an industry becomes like a regulated utility, the more administrators are required to enforce the regulations and administer the programs. And they, as well as the programs they administer, are expensive. All manner of distortions follow, and the costs of healthcare go up proportionally.
There also seems to be perverse incentives associated with subsidy: The more resources you dump in, the more expensive that industry becomes. You might shift the costs around on unsuspecting groups (like taxpayers), but in almost every case we see premium hikes and tuition increases in both of these industries, despite (or rather because of) the truckloads of federal largesse.
But they will have to stop at some point — one way or the other.
The US healthcare system has become something of a Frankenstein monster, with pieces stitched together ad hoc by regulators and special interests. The ACA seems to have ignored most of what really needed fixing and doubled down on the worst aspects of our system. Price transparency, affordability, innovation and competitive entrepreneurship have all gotten worse, not better. And the beast has grown to take over more than 17 percent of GDP.
(And if you think 17 percent is about right, consider that in Singapore healthcare takes up less than 3 percent of GDP.)
The trouble with any further healthcare reform is that a massive coalition of special interests in multiple sectors has formed as a husk around the entire industry — a care-tel, if you will — and they will be very difficult to dislodge.
Posted by arclein at 12:00 AM