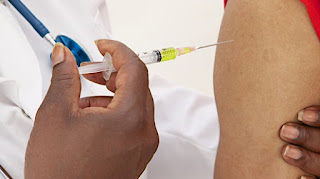 This is good news and could even be good enough if it is combined with all the other  therapies and protocols as well.   Good enough means making the disease very rare and largely treatable.  Removing even a third of the victim pool is a great start.

This is a real advance that can save millions of lives.  Even better health care is also advancing everywhere  in the tropics so it may well be the right time also.

We still want to erradicate the problem but success there has also been spotty or at best partial.  True eradication must await a far deeper  level of social and economic development as well as the well known Italian case study showed so well. .

A new study suggests that RTS,S/AS01, the prime candidate for a malaria vaccine and the first one to reach large-scale clinical testing, is partially effective especially among young African children for a period of up to four years after vaccination. The vaccine could potentially prevent millions of cases of clinical malaria, particularly in areas of high transmission like sub-Saharian Africa, and in the age group in which malaria is known to be the most lethal.

The World Health Organization (WHO) estimates that 1.2 billion people around the world are currently at high risk of contracting malaria. In 2013, as many as 283 million cases of this debilitating disease are thought to have caused nearly 600,000 deaths. It is also estimated that around 90 percent of those deaths took place in Africa, and about three in four casualties were children below the age of five.

The search for a malaria vaccine has spanned many decades and has produced several promising candidates, although the vast majority of candidate vaccines have only been tested on a handful of patients at a time in what’s known as a "phase I" testing.

Vaccine candidate RTS,S/AS01 is the first to have reached phase III of clinical testing. This phase consists of a series of randomized, controlled tests conducted by multiple clinics on hundreds or thousands of patients, with the goal of assessing the effectiveness of the drug over several years. After nearly four years of testing, this phase has finally reached its conclusion and researchers have announced its results, which look promising in many respects.

The preliminary results published last year had shown a vaccine efficacy of about 46 percent in children and around 27 percent among young infants after a period of 18 months. In this latest study, researchers followed up on their patients for a further 20 to 30 months to evaluate the impact of a fourth booster dose.

Unfortunately, the vaccine was shown to be less effective for infants. In those who received three doses of vaccine plus a booster, the four shots reduced the risk of clinical episodes of malaria by 26 percent over three years, but there was no significant protection against severe malaria.
"Despite the falling efficacy over time, there is still a clear benefit from RTS,S/AS01," says study author Prof. Brian Greenwood. "An average 1,363 cases of clinical malaria were prevented over four years of follow-up for every 1,000 children vaccinated, and 1,774 cases in those who also received a booster shot. Over three years of follow-up, an average 558 cases were averted for every 1,000 infants vaccinated, and 983 cases in those also given a booster dose."

According to Greenwood, this level of efficacy could potentially translate into millions of cases of malaria in children being prevented.

WHO data suggests that the incidence of malaria has decreased by 30 percent globally since the turn of the century, and that the mortality rate has halved during the same period. This has been largely because of a host of widespread preventative measures including mosquito nets, rapid diagnostic testing and improved access to treatment. So, although the results of this large-scale test are exciting, it will be important not to steer funding away from these measures as a malaria vaccine is rolled out.
The European Medicines Agency (EMA) will now assess the safety and efficacy of the vaccine based on the latest data. According to Greenwood, should the assessment be positive, the World Health Organization could recommend the use of the vaccine as early as October this year and could become the first ever licensed human vaccine against a parasitic disease.

The results were published in the journal The Lancet.
Posted by arclein at 12:00 AM