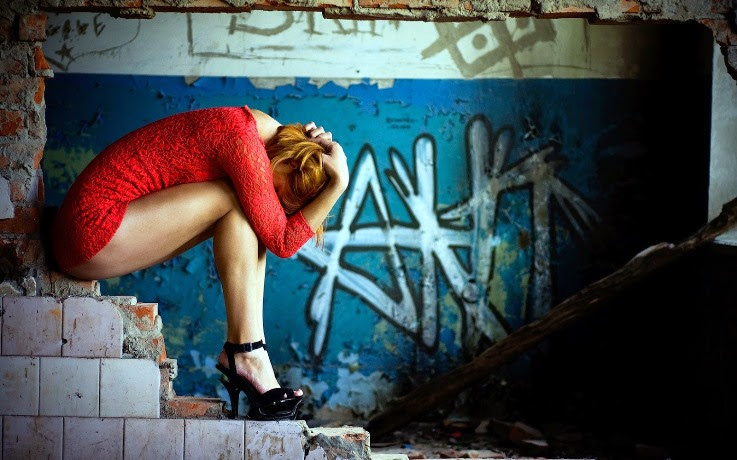 I had suspected that this was the road to real elimination but lacked anything that looked like an example.  This puts that lack to rest once and for all.

It still leaves the question of a practical sex therapy protocol to resolve the more general problem of managing human needs.  In Sweden's example, we still have commercial activity but it is happening between consenting adults with no criminal intrusion as far as can be determined.  It just became too risky for the criminals.

The good news is not that we are changing human nature here but we are making it dangerous for the criminal element to exploit the vulnerable.  That is good enough for now and most problems will be reportable and likely actionable.  In the meantime there will continue to be a thriving black market based on trust relationships..

Sweden's Prostitution Solution: Why Hasn't Anyone Tried This Before?

By what complex formula has Sweden managed this feat? Amazingly, Sweden's strategy isn't complex at all. It's tenets, in fact, seem so simple and so firmly anchored in common sense as to immediately spark the question, "Why hasn't anyone tried this before?"

In addition to the two pronged legal strategy, a third and essential element of Sweden's prostitution legislation provides for ample and comprehensive social service funds aimed at helping any prostitute who wants to get out, and additional funds to educate the public. As such, Sweden's unique strategy treats prostitution as a form of violence against women in which the men who exploit by buying sex are criminalized, the mostly female prostitutes are treated as victims who need help, and the public is educated in order to counteract the historical male bias that has long stultified thinking on prostitution. To securely anchor their view in firm legal ground, Sweden's prostitution legislation was passed as part and parcel of the country's 1999 omnibus violence against women legislation.

An Early Obstacle in the Path

Interestingly, despite the country's extensive planning prior to passing the legislation, the first couple years into this novel project nothing much happened at all. Police made very few arrests of johns and prostitution in Sweden, which had previously been legalized, went on pretty much as it had gone on before. Naysayers the world over responded to the much publicized failure with raucous heckling, "See? Prostitution always has been, and it always will be."

But eminently secure in the thinking behind their plan, the Swedes paid no heed. They quickly identified, then solved the problem. The hang-up, the place where their best efforts had snagged, was that law enforcement wasn't doing it's part. The police themselves, it was determined, needed in-depth training and orientation to what the Swedish public and legislature already understood profoundly. Prostitution is a form of male violence against women. The exploiter/buyers need to be punished, and the victim/prostitutes need to be helped. The Swedish government put up extensive funds and the country's police and prosecutors, from the top ranks down to the officer on the beat, were given intensive training and a clear message that the country meant business. It was then that the country quickly began to see the unequaled results.

Today, not only do the Swedish people continue to overwhelming support their country's approach to prostitution (80% of people in favor according to national opinion polls), but the country's police and prosecutors have also come around to be among the legislation's staunchest supporters. Sweden's law enforcement has found that the prostitution legislation benefits them in dealing with all sex crimes, particularly in enabling them to virtually wipe out the organized crime element that plagues other countries where prostitution has been legalized or regulated.

The Failure of Legalization and/or Regulation Strategies

This Swedish experiment is the single, solitary example in a significant sized population of a prostitution policy that works. In 2003, the Scottish government in looking to revamp its own approach to prostitution enlisted the University of London to do a comprehensive analysis of outcomes of prostitution policies in other countries. In addition to reviewing Sweden's program, the researchers chose Australia, Ireland, and the Netherlands to represent various strategies of legalizing and/or regulating prostitution. The researchers did not review the situation where prostitution is criminalized across the board as it is in the US. The outcome of that approach is already well known. The failures and futility of the revolving door of arresting and rearresting prostitutes is all too familiar the world over.

But the outcomes, as revealed in the Univ. of London study, in the states under review that had legalized or regulated prostitution were found to be just as discouraging or even more discouraging than the traditional all round criminalization. In each case the results were dramatic in the negative.

Legalization and/or regulation of prostitution, according to the study, led to:

In the state of Victoria, Australia, where a system of legalized, regulated brothels was established, there was such an explosion in the number of brothels that it immediately overwhelmed the system's ability to regulate them, and just as quickly these brothels became a mire of organized crime, corruption, and related crimes. In addition, surveys of the prostitutes working under systems of legalization and regulation find that the prostitutes themselves continue to feel coerced, forced, and unsafe in the business.

A survey of legal prostitutes under the showcase Netherlands legalization policy finds that 79% say they want to get out of the sex business. And though each of the legalization/regulation programs promised help for prostitutes who want to leave prostitution, that help never materialized to any meaningful degree. In contrast, in Sweden the government followed through with ample social services funds to help those prostitutes who wanted to get out. 60% of the prostitutes in Sweden took advantage of the well funded programs and succeeded in exiting prostitution.*

* The full Scottish government report on prostitution policies can be seen at www.scottish.parliament.uk

So Why Hasn't Anyone Tried This Before?

Why, then, with Sweden's success so clearly lighting the way, aren't others quickly adopting the plan? Well, some are. Both Finland and Norway are on the verge of making the move. And if Scotland takes the advise of its own study, it will go in that direction too. But, the answer to the question of why other countries aren't jumping to adopt Sweden's plan is probably the same as the answer to the question of why governments haven't tried Sweden's solution before.

Sweden, in contrast, has led the way in promoting equality for women for a very long time. In 1965, for example, Sweden criminalized rape in marriage. Even by the 1980's there were states in the United States that still hadn't made that fundamental recognition of women's rights to control her own body. The Swedish government also stands out in having the highest proportion of women at all levels of government. In 1999, when Sweden passed its groundbreaking prostitution legislation, the Swedish Parliament was composed of nearly 50% women.

Sweden's prostitution policy was first designed and lobbied for by Sweden's organization of women's shelters and was then fostered and fought for by a bipartisan effort of Sweden's uniquely powerful and numerous female parliamentarians. Nor has Sweden stopped there. In 2002, Sweden passed additional legislation bolstering the original prostitution legislation. The 2002 Act Prohibiting Human Trafficking for the Purpose of Sexual Exploitation closed some of the loopholes in the earlier legislation and further strengthened the government's ability to go after the network of persons that surround and support prostitution, such as the recruiters, the transporters, and the hosts.

And Why Can't We Copy Sweden's Success Here?

While it's probably true that we and other countries are still much more steeped in patriarchal darkness than Sweden, there's no reason we can't push now for the policy changes that Sweden has made. The beauty of it is that once the ground has been broken and the proof of success has been established, it should be ever much easier to convince others to go down that path.

Feel free to photocopy and distribute this information as long as you keep the credit and text intact.
Copyright © Marie De Santis,
Women's Justice Center,
www.justicewomen.com
rdjustice@monitor.net
Posted by arclein at 12:00 AM