What i find interesting in this report is that it spells out that this creature is at home in the water.  I had expected as much but this directly confirms the claim with witnesses who hung around to watch.  Otherwise this is a dragon story and possibly a tall tale.

That it is big enough to carry several hundred pounds is also impressive but also reminds one of the dragon story.  Yet this got printed and it remains possible that these story tellers had the confidence of the community.


Otherwise their good fortune was to observe it in daylight and up close.
.

An article referencing a 'huge flying reptile carrying a horse in it’s jaws' was carried widely and published in the Salt Lake City County News. It was also reprinted in several newspapers nationwide including the Pittsburgh Press, Pittsburgh, PA on September 3, 1903 (posted below). It gave an eyewitness account of a gigantic, 'prehistoric monster' on Stansbury Island that could have been a pterosaur:

PREHISTORIC MONSTER - Half Bird and Half Reptile Carries Away Live Horses

A terrible, nameless, unclassified creature of the animal world is exciting the curiosity, wonder and fear of occasional visitors to Stansbury Island, in the southern portion of Great Salt Lake.

This monster, for it can be called nothing else, has lately, it is said, been seen by several persons, but the best account of its characteristics and movements is given by Martin Gilbert and John Barry, two hunters who this week returned from an expedition over the island, in the course of which they studied the habits of this hitherto unheard-of creature for three days.

The monster, which appears to be almost equally at home in the air, on the beach, or submerged in the briny waters of Salt Lake, is probably the sole survivor of a prehistoric species. It is doubtless the last representative of a family whose other members, dead ages since, have left the testimony of their existence in the primeval rocks of the mountains.

Arranging in concise form the description of this incredible relic of the animal world, from the accounts given by those who have observed it at close range, it seems in plain, unscientific language a combination of fish, alligator and bat.

In size it is simply tremendous. Gilbert places its length at 50 feet, while Barry, who is an amateur scientist, says that an examination of its,tracks demonstrates that the monster must be at least 65 feet from head to tail.

The head is like that of an alligator, the eyes fiercely glowing, the jaws, capable of opening to a distance of 10 feet from the top of the upper to the lower, are provided with a fearful array of sharp saw-edged teeth, the body, so far as observation goes, is increased with heavy, horny scales. As to this Gilbert and Barry are not positive, as the constant diving of the beast, if such it may be called, into the strong brine of the lake has incrusted it with a thick coating of salt, which save near the wings completely hides the body.

It is due to this unusual phenomenon that the hunters obtained their first sight of the monster. According to their account they first sighted it at a distance of between one and a half and two miles. The day was clear, the sun intensely bright. Gilbert’s own words of the discovery are:

“We were walking westward from the east shore of the island about 9 o’clock in the morning when suddenly to the northwest there appeared a thing. I don’t know what to call it. It looked to me like a brilliant rainbow folded into compact mass, moving rapidly through the air.

“In three or four minutes the monster’s position was such that it no longer reflected the sunlight directly toward us, and we would then discern the outline of the form. Its wings were bat-like, stretching out over a great expanse. I should say at least 100 feet from tip to tip. The tail was proportionately short, and resembled that of a huge fish. We were not close enough at this time to tell much about the head, only we saw that the jaws were very long. In shape the head was like that of a crocodile.

“We watched it disappear in the gathering gloom of night, but were for a long time paralyzed with fear, not knowing when it might return. It was probably an hour later when it did come back.

“We heard the swish of the mighty wings before it could be seen, but as it drew nearer, by the light of the young moon in the West, we saw that it carried in its great jaws a large horse, which I supposed it had swooped down upon while feeding. The horse was badly crushed and mangled.

“The monster carried its burden into the cave, and we could hear the crunching of its jaws and the cracking of the horse’s bones as the beast devoured its victim. After an hour or so all was so still, and then slipped quietly away in the darkness and returned to our cmap on the eastern shore of the island.” – Salt Lake City Co., Denver News 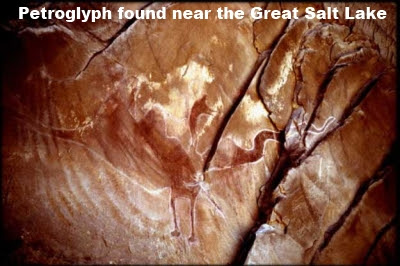 The early native Tumpanawach people had an oral tradition about a monster that inhabited the Great Salt Lake area called the Great Mosquito Monster or the Giant Mosquito Monster. This winged creature with a long beak was a terror and was reportedly responsible for the disappearance and destruction of many members of the tribe.
Posted by arclein at 12:00 AM