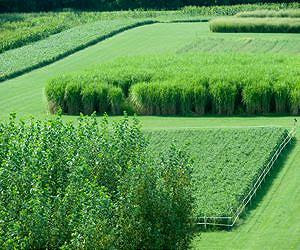 What interests me is that we spray plants as a matter of course in order to provide fertilization and pest control.  There is no plausible capital cost barrier top apply a new sprayed protocol.

Thus just placing a water insoluble layer on plants will change insect behavior.  Just the layer alone acts as a barrier and that is before you make it sticky as well as many plants do.  All these should happens before we throw toxins around.  After all we are looking to discourage the insects in most cases and that is more than good enough.

Not just this rather special biochemistry needs to be followed up on.  we need to play around with as many plant produced protocols as we can discover out there with the intent to spray them on.

Fresh insights into how bacteria protect themselves - by forming a waterproof raincoat - could help develop improved products to protect plants from disease.

Researchers have discovered how communities of beneficial bacteria form a waterproof coating on the roots of plants, to protect them from microbes that could potentially cause plant disease.

Their insights could lead to ways to control this shield and improve its efficiency, which could help curb the risk of unwanted infections in agricultural or garden plants, the team says.

Scientists at the Universities of Edinburgh and Dundee studied the protective film formed by the common soil bacterium Bacillus subtilis. They found it incorporates proteins that change shape as they reach the film surface. This exposes an impervious surface on the protein molecules, enabling them to slot together like a jigsaw puzzle, to protect bacteria underneath.

The film is able to repel water - which means other potentially harmful molecules also bounce off. Researchers say that being able to control the production of the biofilm in agricultural products could enable improved protection for plants.

Professor Cait MacPhee, of the University of Edinburgh's School of Physics and Astronomy, said: "Such a controlled shape change in a protein is unusual. This protein only responds in exactly the right way and in the right place. It protects microbes from the outside world, but the ability to control the creation of a water-repellent film has many possible applications."

Dr Nicola Stanley-Wall, of the University of Dundee's Division of Molecular Microbiology, said: "Our findings highlight one of the amazing mechanisms that bacteria have evolved to provide protection from changes in their environment. It also demonstrates the advances that can be made when biologists and physicists work together on a problem of mutual interest."
Posted by arclein at 12:00 AM