Stone Bracelet is Oldest Ever Found 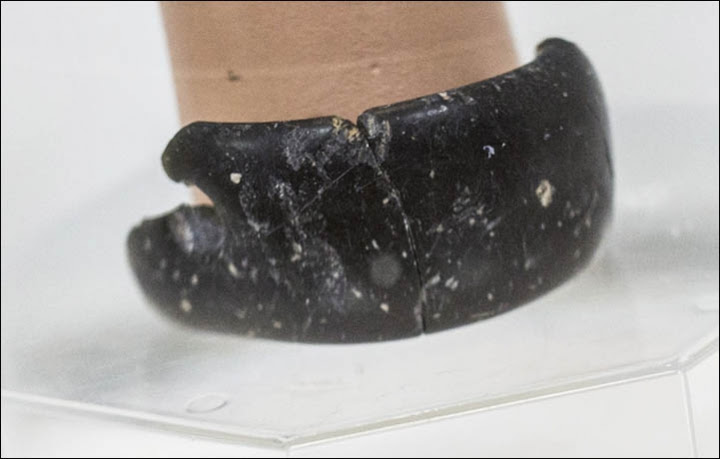 This confirms a skilled use of tools dating 40,000 years ago.  Drilling is easily accomplished with a stick and abrasive such as emery sand.  Add in a simple bow to make it smooth and fast with pressure and you are in business.

The same trick operates a grind stone that can be used to shape the bracelet.   In fact have a light grindstone sitting flat face up with a center cone on the axis and you can produce bracelets continuously and fast.  Other wise it can be done much slower as well.

Obviously, the grindstone would never be lost.  Yet this bracelet is proof positive that all this easily existed..

Stone bracelet is oldest ever found in the world

By Anna Liesowska
07 May 2015
http://siberiantimes.com/science/casestudy/features/f0100-stone-bracelet-is-oldest-ever-found-in-the-world/
Dating back 40,000 years to the Denisovan species of early humans, new pictures show beauty and craftsmanship of prehistoric jewellery.

While bracelets have been found pre-dating this discovery, Russian experts say this is the oldest known jewellery of its kind made of stone. Picture: Vera Salnitskaya


It is intricately made with polished green stone and is thought to have adorned a very important woman or child on only special occasions. Yet this is no modern-day fashion accessory and is instead believed to be the oldest stone bracelet in the world, dating to as long ago as 40,000 years.

Unearthed in the Altai region of Siberia in 2008, after detailed analysis Russian experts now accept its remarkable age as correct.


New pictures show this ancient piece of jewellery in its full glory with scientists concluding it was made by our prehistoric human ancestors, the Denisovans, and shows them to have been far more advanced than ever realised.


'The bracelet is stunning - in bright sunlight it reflects the sun rays, at night by the fire it casts a deep shade of green,' said Anatoly Derevyanko, Director of the Institute of Archaeology and Ethnography in Novosibirsk, part of the Siberian Branch of the Russian Academy of Sciences. 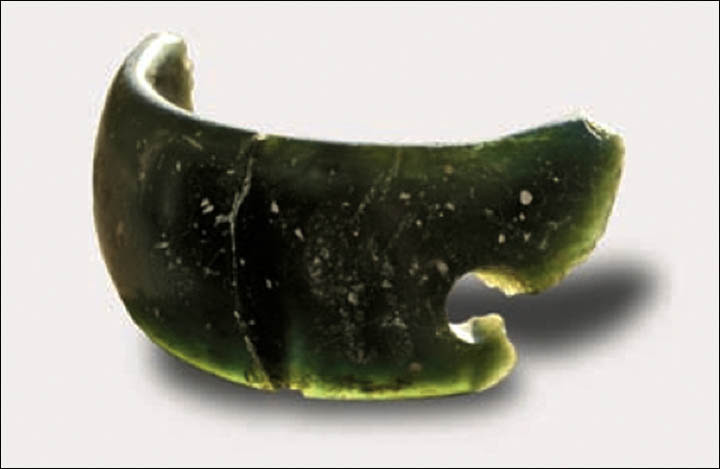 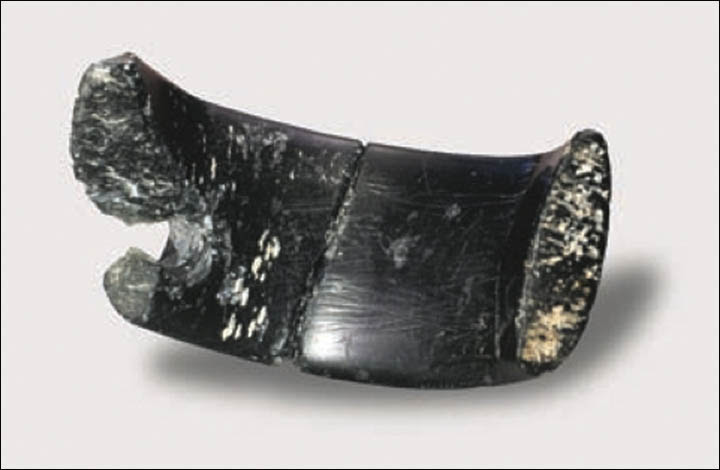 Made of chlorite, the bracelet was found in the same layer as the remains of some of the prehistoric people and is thought to belong to them. Pictures: Anatoly Derevyanko and Mikhail Shunkov


'It is unlikely it was used as an everyday jewellery piece. I believe this beautiful and very fragile bracelet was worn only for some exceptional moments.'


The bracelet was found inside the famous Denisova Cave, in the Altai Mountains, which is renowned for its palaeontological finds dating back to the Denisovans, who were known as homo altaiensis, an extinct species of humans genetically distinct from Neanderthals and modern humans.


Made of chlorite, the bracelet was found in the same layer as the remains of some of the prehistoric people and is thought to belong to them.


What made the discovery especially striking was that the manufacturing technology is more common to a much later period, such as the Neolithic era. Indeed, it is not clear yet how the Denisovans could have made the bracelet with such skill. 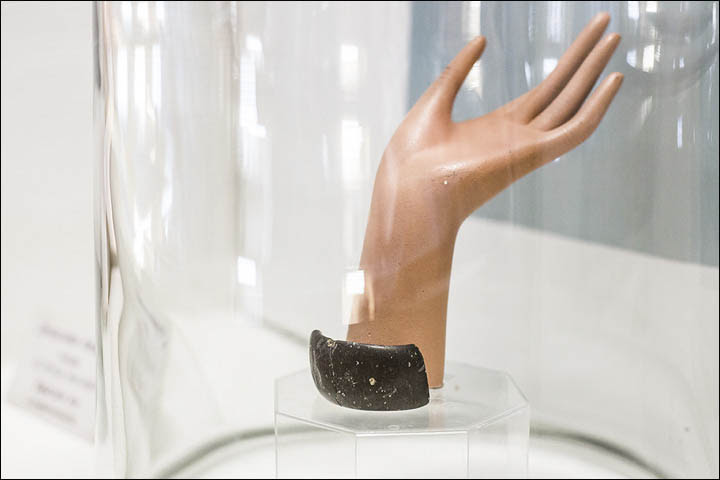 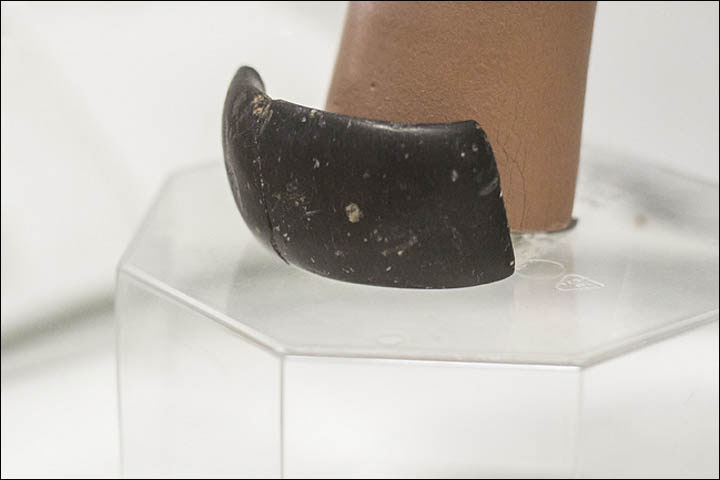 New pictures show this ancient piece of jewellery in its full glory with scientists concluding it was made by our prehistoric human ancestors. Pictures: Vera Salnitskaya


Writing in the Novosibirsk magazine, Science First Hand, Dr Derevyanko said: 'There were found two fragments of the bracelet of a width of 2.7cm and a thickness of 0.9 cm. The estimated diameter of the find was 7cm. Near one of the cracks was a drilled hole with a diameter of about 0.8 cm. Studying them, scientists found out that the speed of rotation of the drill was rather high, fluctuations minimal, and that was there was applied drilling with an implement - technology that is common for more recent times. 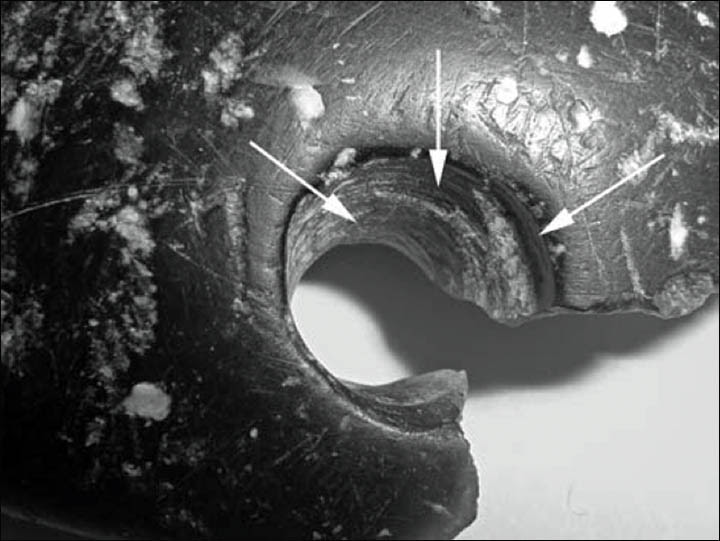 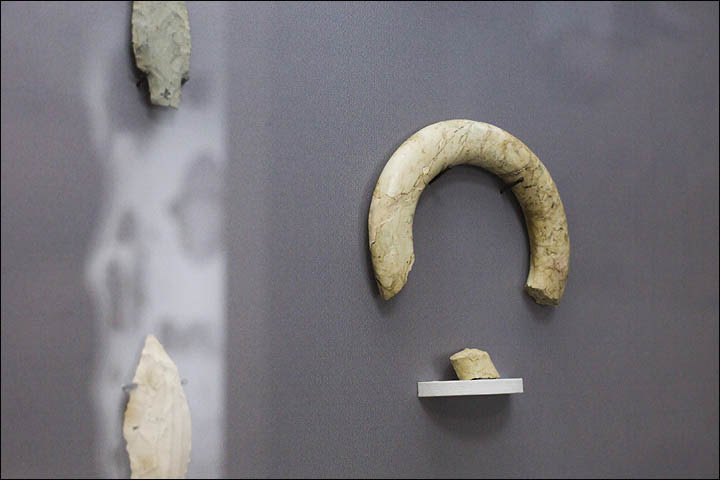 Traces of the use of drilling with an implement on the bracelet from Denisova Cave. Polished stone bracelet of Neolithic era. Pictures: Anatoly Derevyanko and Mikhail Shunkov, Vera Salnitskaya


'The ancient master was skilled in techniques previously considered not characteristic for the Palaeolithic era, such as drilling with an implement, boring tool type rasp, grinding and polishing with a leather and skins of varying degrees of tanning.'


Chlorite was not found in the vicinity of the cave and is thought to have come from a distance of at least 200km, showing how valued the material was at the time.


Dr Derevyanko said the bracelet had suffered damage, including visible scratches and bumps although it looked as if some of the scratches had been sanded down. Experts also believe that the piece of jewellery had other adornments to make it more beautiful.


'Next to the hole on the outer surface of the bracelet can be seen clearly a limited polished zone of intensive contact with some soft organic material,' said Dr Derevyanko. 'Scientists have suggested that it was a leather strap with some charm, and this charm was rather heavy. The location of the polished section made it possible to identify the 'top' and 'bottom' of the bracelet and to establish that it was worn on the right hand.' 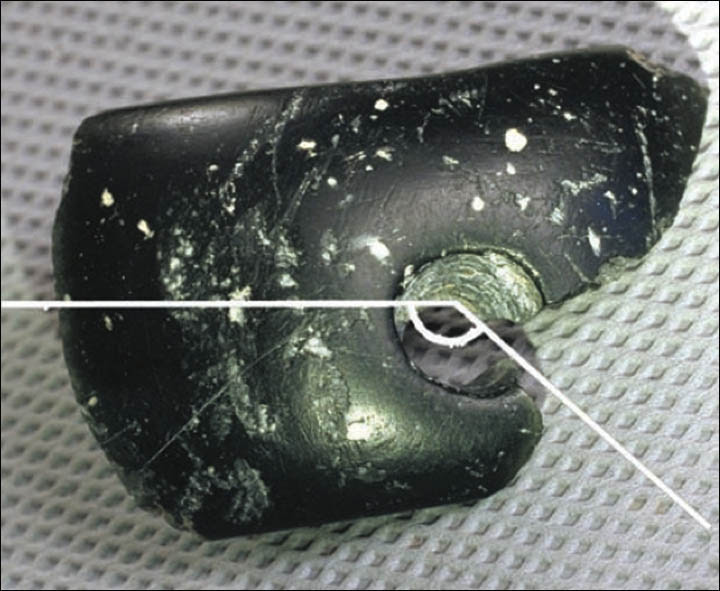 Polished zone of intensive contact with some soft organic material. General reconstruction of the view of the bracelet and compraison with the modern bracelet. Pictures: Anatoly Derevyanko and Mikhail Shunkov, Anastasia Abdulmanova


Located next to the Anuy River, about 150 km south of Barnaul, the Denisova Cave is a popular tourist attraction, such is its paleontological importance. Over the years a number of remains have been found there, including some of extinct animals such as the woolly mammoth. In total evidence of 66 different types of mammals have been discovered inside, and 50 bird species.


The most exciting discovery was the remains of the Denisovans, a species of early humans that dated back as early as 600,000 years ago and were different to both Neanderthals and modern man.


In 2000 a tooth from a young adult was found in the cave and in 2008, when the bracelet was found, archaeologists discovered the finger bone of a juvenile Denisovan hominin, whom they dubbed the 'X woman'. Further examination of the site found other artifacts dating as far back as 125,000 years.


The institute's deputy director Mikhail Shunkov suggested that the find indicates the Denisovans - though now extinct - were more advanced than Homo sapiens and Neanderthals. 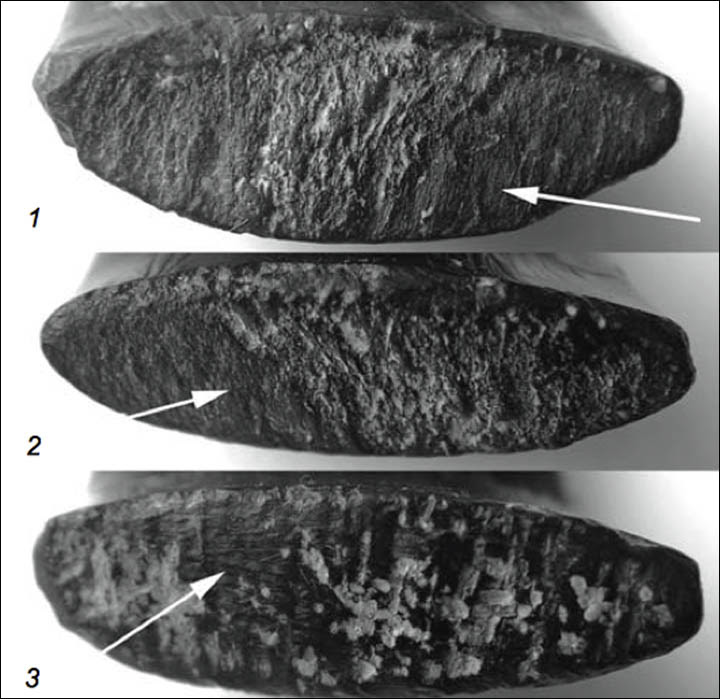 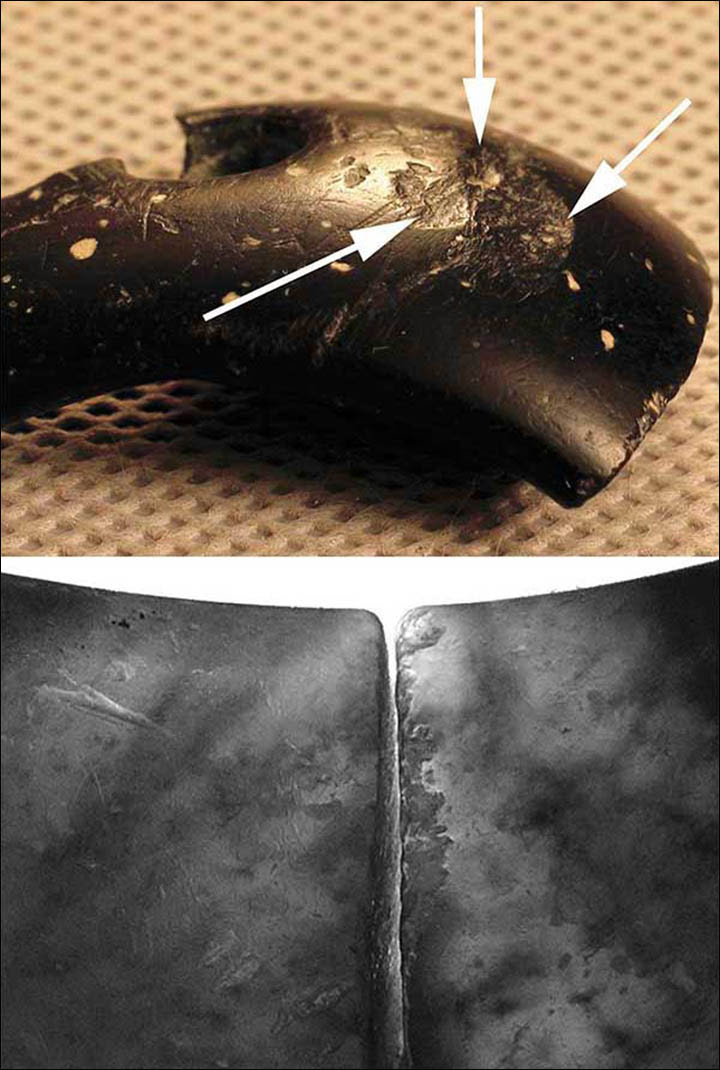 The traces of reparation on the cracks. Bracelet had suffered damage, including visible scratches and bumps. Pictures: Anatoly Derevyanko and Mikhail Shunkov

'In the same layer, where we found a Denisovan bone, were found interesting things; until then it was believed these the hallmark of the emergence of Homo sapiens,' he said. 'First of all, there were symbolic items, such as jewellery - including the stone bracelet as well as a ring, carved out of marble.'


The full details of the ring are yet to be revealed.

'These finds were made using technological methods - boring stone, drilling with an implement, grinding - that are traditionally considered typical for a later time, and nowhere in the world they were used so early, in the Paleolithic era. At first, we connected the finds with a progressive form of modern human, and now it turned out that this was fundamentally wrong. Obviously it was  Denisovans, who left these things.'


This indicated that 'the most progressive of the triad' (Homo sapiens, Homo Neanderthals and Denisovans) were Denisovans, who according to their genetic and morphological characters were much more archaic than Neanderthals and modern human.' 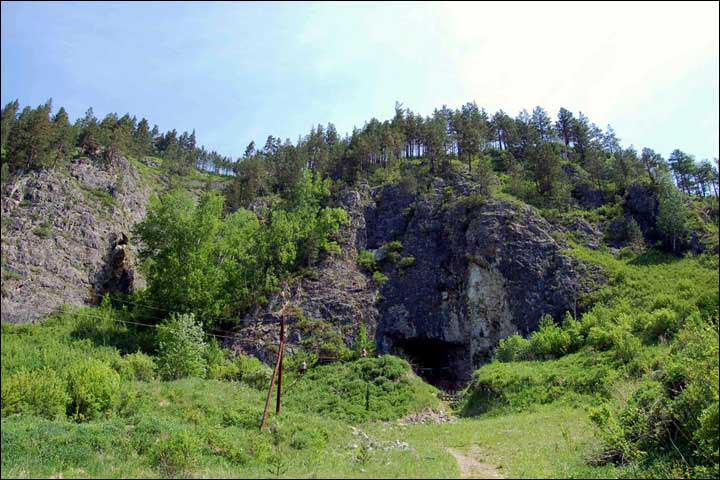 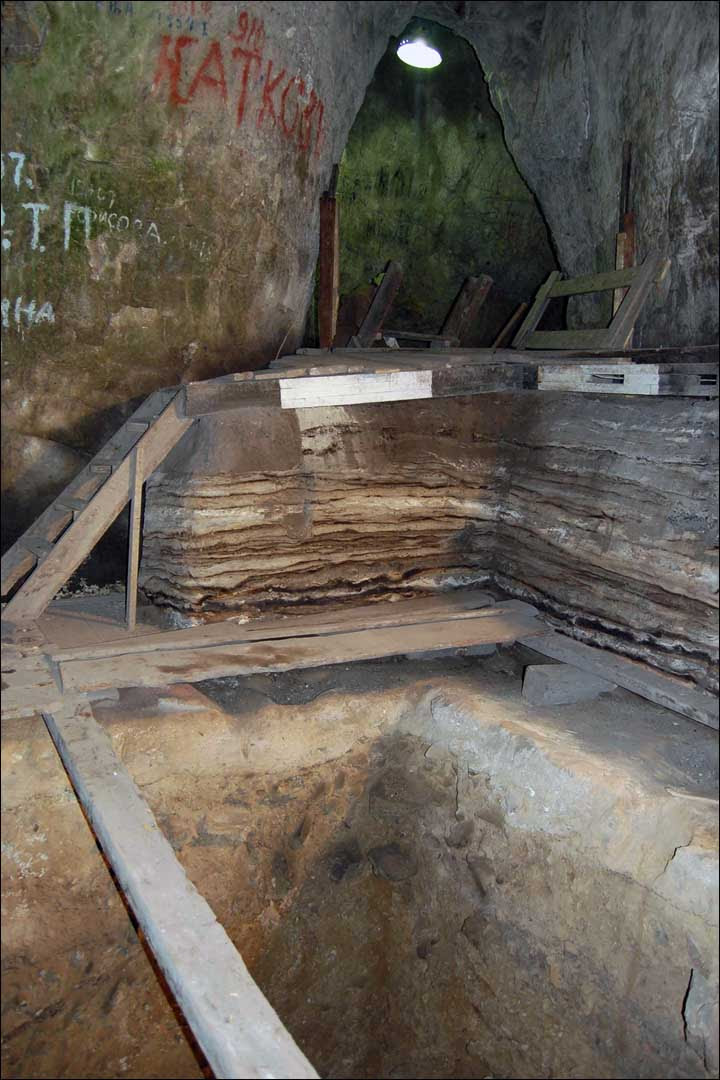 The entrance to the Denisova cave and the archaeological excavations inside. Pictures: The Siberian Times

But could this modern-looking bracelet have been buried with older remains?

The experts considered this possibility but rejected it, saying they believe the layers were uncontaminated by human interference from a later period. The soil around the bracelet was also dated using oxygen isotopic analysis.

The unique bracelet is now held in the Museum of History and Culture of the Peoples of Siberia and the Far East in Novosibirsk. Irina Salnikova, head the museum, said of the bracelet: 'I love this find. The skills of its creator were perfect. Initially we thought that it was made by Neanderthals or modern humans, but it turned out that the master was Denisovan, at least in our opinion. 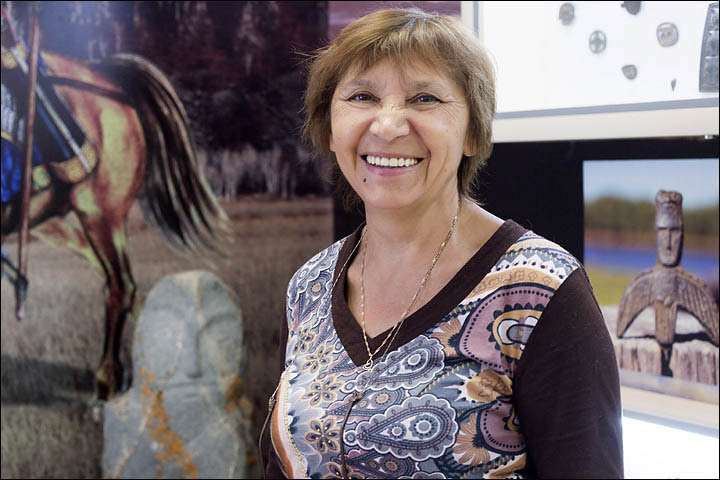 Irina Salnikova, head the Museum of History and Culture of the Peoples of Siberia and the Far East in Novosibirsk. Picture: Vera Salnitskaya


'All jewellery had a magical meaning for ancient people and even for us, though we do not always notice this. Bracelets and neck adornments were to protect people from evil spirits, for instance. This item, given the complicated technology and 'imported' material, obviously belonged to some high ranked person of that society.'

While bracelets have been found pre-dating this discovery, Russian experts say this is the oldest known jewellery of its kind made of stone.
Posted by arclein at 12:00 AM