Most Comprehensive Study to Date Reveals Evolutionary History of Citrus 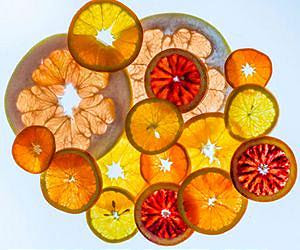 For a fruit so valuable, it is surprising just how grey its evolutionary history was.  Whatever happened it put wild progenitors into south east Asia allowing ample experimentation.  Considering the actual extant variety and the real range in terms of reward, many other aspects were in play as well.  Otherwise the only survivor would be the mandarin.

We are going to see this happen with all our food plants as we trace out their evolutionary history.

All great science and just the beginnings of an enterprise that will last centuries..

Most comprehensive study to date reveals evolutionary history of citrus

The Citrus evolutionary tree is made of three main branches: the citron/Australian species, the pummelo/micrantha and the papeda/mandarins.

Citrus fruits - delectable oranges, lemons, limes, kumquats and grapefruits - are among the most important commercially cultivated fruit trees in the world, yet little is known of the origin of the citrus species and the history of its domestication.

Now, Joaquin Dopazo et al, in a new publication in the journal Molecular Biology and Evolution, have performed the largest and most detailed genomic analysis on 30 species of Citrus, representing 34 citrus genotypes, and used chloroplast genomic data to reconstruct its evolutionary history.

Overall, the results confirm a monophyletic origin - a single common ancestor, that gave rise to all citrus fruit. Another result from the study was the remarkable level of heteroplasmy, or hybridization seen, an event that the authors showed occurred frequently in Citrus evolution.

The Citrus evolutionary tree is made of three main branches: the citron/Australian species, the pummelo/micrantha and the papeda/mandarins. The Citrus ancestors were generated in a succession of speciation events occurring between 7.5-6.3 Mya, followed by a second radiation (5.0-3.7 Mya) that separated citrons from Australian species, and finally, Micrantha from Pummelos and Papedas from mandarins. Further radiation of Fortunella, sour and sweet oranges, lemons, and mandarins took place later (1.5-0.2 Mya).

On a finer scale, the group also identified 6 genes that may be general hotspots of natural genetic variation in Citrus. Advantageous mutations for adaptation were detected in 4 of these genes, matK, ndhF, ycf1 and ccsA. In particular, matK and ndhF were thought to help the Australian varieties adapt to hotter and drier climates while ccsA represents the emergence of mandarins.

"This new phylogeny based on chloroplast genomes provides an accurate description of the evolution of the genus citrus and clears up years of ambiguities derived from previous proposals based on one or a few nuclear or chloroplast genes," said Dopazo.
Posted by arclein at 12:00 AM