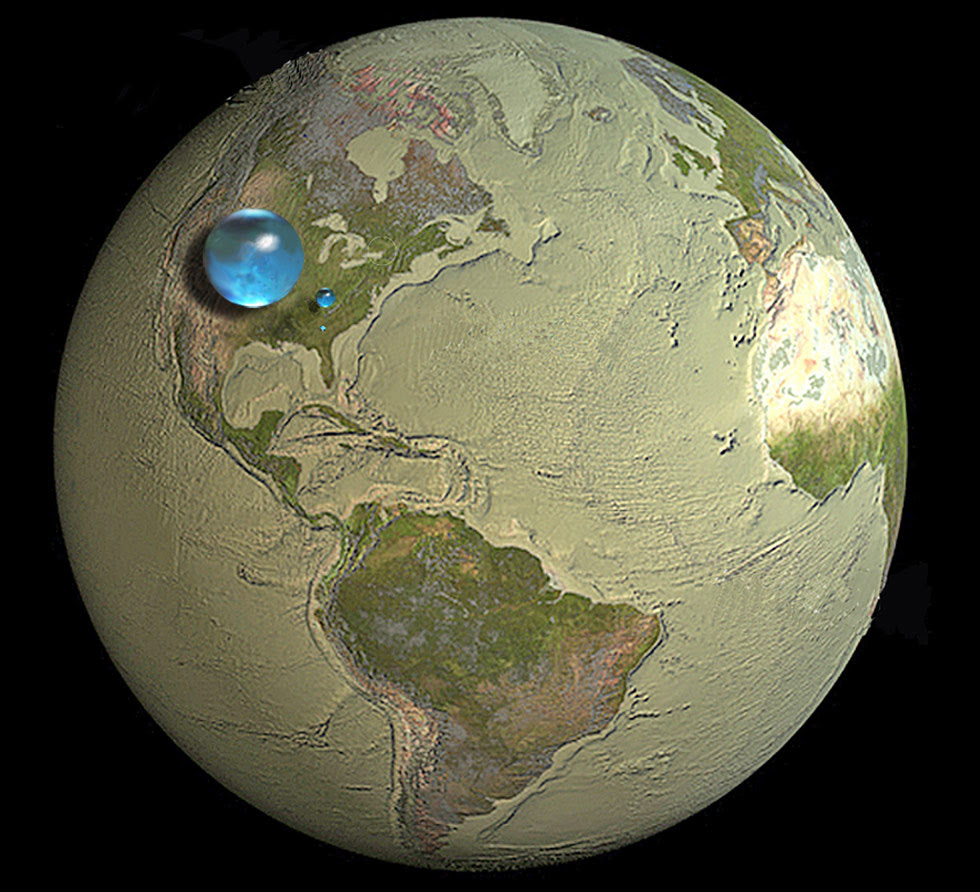 This is a wonderful graphic simply because it places the Earth's gross water content into the correct perspective when we look at other planets.   It also informs us of one major inference.  Any water rich comet that was sized toward perhaps a third of the Earth.s diameter  could easily deliver all the waqter and organic volitiles needed to produce our present situation.   The conjecture was always plausible but this illustrates it completely.

We also are provided with the raw numbers and that is useful to have at hand as well.

The take home is that our Earth is bathed with scant water.  Yet that is the likely production of just one comet hitting us early on.   This also suggests two other conjectures:

Such impacts are rare enough to limit the number of living planets in the Universe.  However, terraforming Venus is a one step process that consists of correctly disturbing a Comet far out onto the correct orbit.  Because i have good reason to think that Venus was artificially triggered by the same folks who saw our Ice Age off with the Pleistocene Nonconformity, there is good reason to suspect that such a comet has already been disturbed and is on its way.

If we can imagine doing this, it is my experience that it is already done.  It may take thousands of years.

How much water is on Earth?

If the big bubble burst:

If you put a (big) pin to the larger bubble showing total water, the resulting flow would cover the contiguous United States (lower 48 states) to a depth of about 107 miles.

The drawings below show various blue spheres representing relative amounts of Earth's water in comparison to the size of the Earth. Are you surprised that these water spheres look so small? They are only small in relation to the size of the Earth. These images attempt to show three dimensions, so each sphere represents "volume." Overall, it shows that in comparison to the volume of the globe the amount of water on the planet is very small - and the oceans are only a "thin film" of water on the surface.

Spheres representing all of Earth's water, Earth's liquid fresh water, and water in lakes and rivers

The largest sphere represents all of Earth's water, and its diameter is about 860 miles (the distance from Salt Lake City, Utah, to Topeka, Kansas). It would have a volume of about 332,500,000 cubic miles (mi3) (1,386,000,000 cubic kilometers (km3)). The sphere includes all the water in the oceans, ice caps, lakes, and rivers, as well as groundwater, atmospheric water, and even the water in you, your dog, and your tomato plant.

How much of the total water is fresh water, which people and many other life forms need to survive? The blue sphere over Kentucky represents the world's liquid fresh water (groundwater, lakes, swamp water, and rivers). The volume comes to about 2,551,100 mi3 (10,633,450 km3), of which 99 percent is groundwater, much of which is not accessible to humans. The diameter of this sphere is about 169.5 miles (272.8 kilometers).

Water in lakes and rivers

Do you notice that "tiny" bubble over Atlanta, Georgia? That one represents fresh water in all the lakes and rivers on the planet, and most of the water people and life of earth need every day comes from these surface-water sources. The volume of this sphere is about 22,339 mi3 (93,113 km3). The diameter of this sphere is about 34.9 miles (56.2 kilometers). Yes, Lake Michigan looks way bigger than this sphere, but you have to try to imagine a bubble almost 35 miles high—whereas the average depth of Lake Michigan is less than 300 feet (91 meters).

The data used on this page comes from Igor Shiklomanov's estimate of global water distribution, shown in a table below.

Sphere representing all of Earth's water

If you just want an image of all water on, in, and above the Earth, here it is. 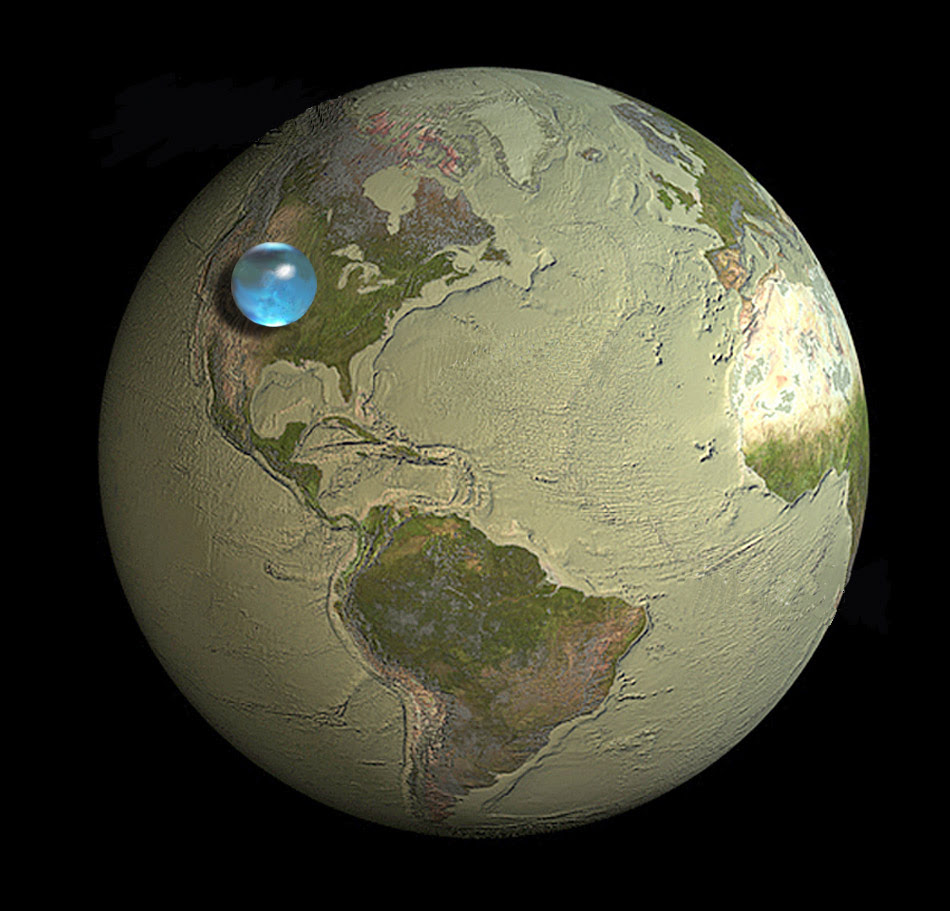 Note: Percentages may not sum to 100% due to rounding.