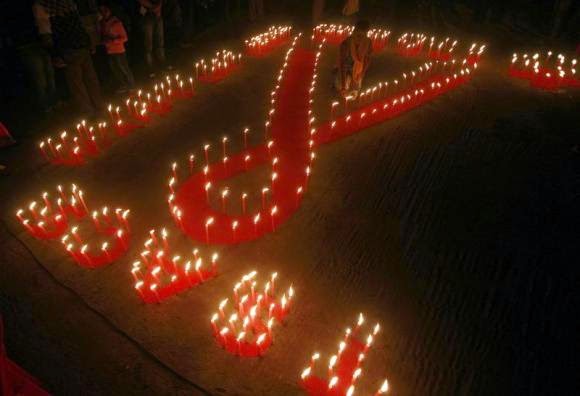 This is great news. It has taken thirty five years to get here, but the down slope should become much quicker.   Most should have been eradicated inside of twenty years or much sooner.  Then we have a long decline caused by waiting for stable victims to simply die of other causes.

There is still plenty of work to do, but one day the disease will actually be extinct.  That could take a very long time though because of specific vulnerable populations who act as a reservoir.

Over 70,000,000 have been infected and half are still with us.  It could have been far far worse.  Education has stopped most of it, but disease management has saved most lives.
.  .

(Reuters) - The world has finally reached "the beginning of the end" of the AIDS pandemic that has infected and killed millions in the past 30 years, according to a leading campaign group fighting HIV.
The number of people newly infected with HIV over the last year was lower than the number of HIV-positive people who joined those getting access to the medicines they need to take for life to keep AIDS at bay.

But in a report to mark World AIDS Day on Dec. 1, the ONE campaign, an advocacy group working to end poverty and preventable disease in Africa, warned that reaching this milestone did not mean the end of AIDS was around the corner.

"We've passed the tipping point in the AIDS fight at the global level, but not all countries are there yet, and the gains made can easily stall or unravel," said Erin Hohlfelder, ONE's director of global health policy.

The human immunodeficiency virus (HIV) that causes AIDS is spread via blood, semen and breast milk. There is no cure for the infection, but AIDS can be kept at bay for many years with cocktails of antiretroviral drugs.

The AIDS pandemic began more than 30 years ago and has killed up to 40 million people worldwide.
The United Nations AIDS agency, UNAIDS, says that, by June 2014, some 13.6 million people globally had access to AIDS drugs, a dramatic improvement on the 5 million who were getting treatment in 2010.

"Despite the good news, we should not take a victory lap yet," said Hohlfelder.

She highlighted several threats to current progress, including a $3 billion shortfall in the funds needed each year to control HIV around the world.

"We want to see bold new funding from a more diversified base, including more from African domestic budgets," she said.

ONE also noted that HIV is increasingly concentrated among hard-to-reach populations such as injecting drug users, gay men and sex workers - groups who are often stigmatised and have trouble accessing treatment and prevention services.