EXPAND
The above photo, taken from a plane above Buffalo yesterday by photographer Jeff Suhr, shows the brutal lake effect snow storm in effect over Western New York right now. Some areas are expecting up to six feet of snow by the end of the week. These snowstorms are among the most intense in the world, and the processes that create them are pretty spectacular.

EXPAND
Lake effect snow is possible in cold spots around the world, but this post will focus on the extreme weather that's often centered around the Great Lakes. The five lakes in the Upper Midwest—Superior, Michigan, Huron, Erie, and Ontario—are the perfect size and in the perfect location to maximize the impact of this annual snow bonanza.

As prevailing winds are most commonly from the north and west, the southern and eastern shores of each respective lake are known as the "snowbelt" because they take the brunt of most heavy lake effect snow events.

The most important factor behind lake effect snow is the temperature of the water itself and the air above it. Thanks to water's high heat capacity, the Great Lakes absorb the heat of the summer and remain relatively warm as the seasons change and the atmosphere grows colder. As cold snaps (like the one we're in) roar over the lakes, there is often a great difference in temperature between the water and the atmosphere.

EXPAND
The warm water heats the air directly above the surface of the lake via conduction—the same process that keeps coastal communities cool during the summertime helps to keep them a little warmer in the winter. If the air mass above the lake is sufficiently cold, the change in temperature with height (called the "lapse rate") grows and the air begins to rise. If the lapse rate is steep enough, the air will rise quickly, forming clouds and precipitation. Warmer air near the surface and colder temperatures aloft will create more vigorous lake effect snow. A lapse rate of 20°F or more can even lead to thundersnow.

Lake effect snow usually continues into the winter months, and ends when one of two things happens: 1) the lakes freeze over, or 2) the lakes cool enough that the temperature difference between the surface and the atmosphere no longer supports convection.
The brutal winter the eastern half of North America experienced this year took a heavy toll on the…
Winds

Winds are a crucial factor in the development of lake effect snow. The orientation of the wind relative to the lakes is important in how and where snow bands will set up, along with the ever-important question of how intense the snow will be.

Lakes Superior, Huron, and Michigan often see a short fetch due to their orientation with respect to prevailing winds. Wind over Lake Superior usually blows from the northwest or northeast, exposing the Upper Peninsula of Michigan and northeastern Wisconsin to heavy snow. Lake effect snow on Lake Michigan often occurs on the western coast of its eponymous state, but a strong north or northeast wind can bring big amounts of the white stuff to Chicago and northwestern Indiana. Lake Huron is similar to Lake Michigan in that lake effect events often occur over Ontario.

Lakes Erie and Ontario see a long fetch because prevailing winds very frequently line up with the orientation of these two lakes, which is why extreme northwestern Pennsylvania and western New York are often slammed by unbelievable snowfall totals.

EXPAND
There are two types of lake effect snow events—multi-band and single-band. Multi-band events are most commonly associated with short fetches (such as those seen on Lake Superior and Lake Michigan), while single-band events are prominently featured on Lake Erie and Lake Ontario. 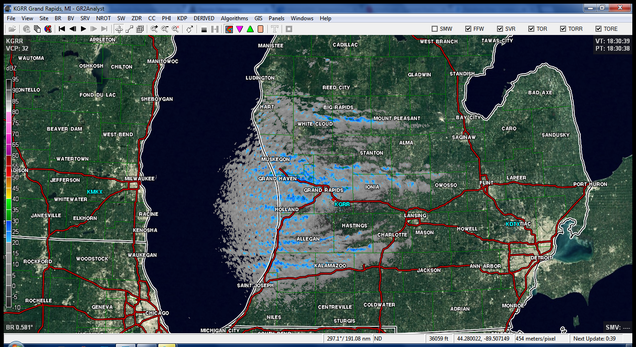 EXPAND
Multi-band lake effect snow occurs as a result of horizontal convective rolls, more commonly known as "cloud streets." Warm air over the lakes rises and condenses, forming clouds. As the air reaches buoyancy, it will begin to sink on either side of the cloud, creating an area of clear air on either side, leading to a long strip of cumulus clouds. The clouds will line up lengthwise with the prevailing wind; this process can repeat itself dozens of times over hundreds of miles, creating spectacular satellite images over the ocean.

If the convection is strong enough, these cloud streets will produce precipitation, which often falls as snow in the Great Lakes. Multi-band lake effect snow events are most common on Lakes Superior, Michigan, and Huron. These bands aren't responsible for the enormous snowstorms we hear about, but what they lack in relative intensity they make up for in coverage. Instead of dumping four feet of snow on one area, multi-band lake effect snow events can dump a foot or more of snow over a huge area. 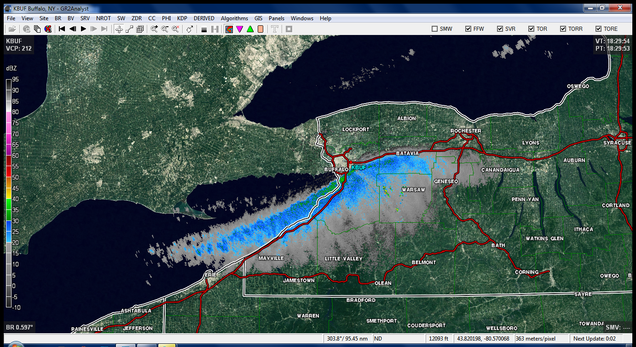 EXPAND
Single-band lake effect snow most commonly occurs on Lakes Erie and Ontario—since the prevailing wind is often from the west or west-southwest—and occasionally on Lake Michigan when the wind is aligned roughly north-south. This type of snowstorm is what produces those legendary storms we hear about in western New York—between November 17 and 18, more than four feet of snow has fallen in western New York due to the persistent band shown in the radar image above.

Single-band events often involve the entire length of a lake due to the long fetch of the wind. They form similar to multi-bands, but expand the process to include the entire lake. In the case of Lake Erie, for instance, warm air rises in the center of the lake, condenses and reaches buoyancy, then sinks on either side of the lake, completing the convection cell. Nature abhors a vacuum, so air on both the north and south sides of the lake rushes in towards the center to fill the void, feeding and enhancing the snow band.

These snow events are brutal, with the most extreme cases persisting for days at a time and producing snowfall rates of more than 4 inches an hour at times. The convection can be so vigorous in single-band lake effect snow that thundersnow is not an uncommon occurrence in the most intense bands.

The cutoff between heavy snow and nothing is also intense, as shown by this image from Buffalo this morning:

You can also see the phenomenon on radar: 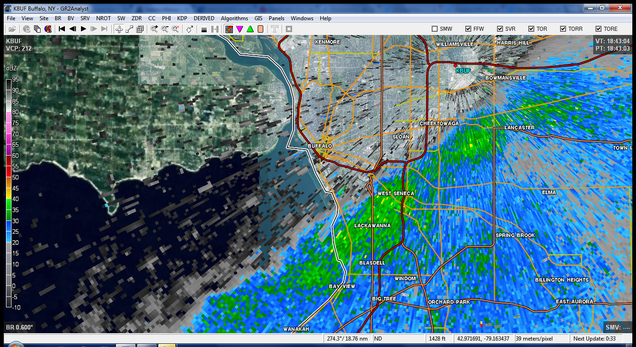 Snowfall totals in lake effects now events can range from a dusting to a couple of inches and, in extreme cases, many feet of snow in a short period of time. Parts of western New York near Buffalo are forecast to wind up with five to six feet of snow by the time this lake effect snow event is over.

The single greatest snowfall ever recorded at the airport in Buffalo was 81.5 inches (6.8 feet) of snow recorded over a five-day period between December 23 and 28 in 2001. Governor George Pataki had to call in the National Guard to help dig the city out from its historic snowfall.

Lake effect snow is an incredible event that allows the Great Lakes to claim the title of snowiest non-mountainous area in the United States. Its residents are hardy and its weather is brutal. The next time you complain about a few inches of snow, remember that you could be in Buffalo instead.
Posted by arclein at 12:00 AM