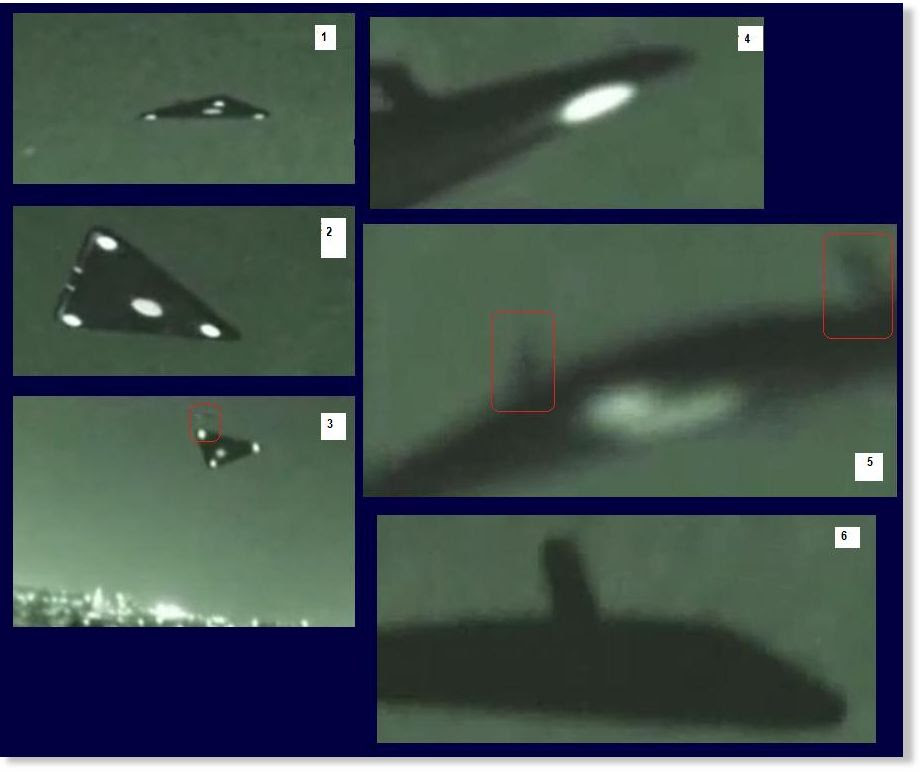 This is an important bit of work.  There has been a large number of oddly shaped UFO observed at night that sported actual lights typical of aircraft.  The best explanation has always been aircraft.  now we can target the triangular anomalies also.  It had never occurred to me that we may well have bmps and airships transiting to help us along.
His experience also shows us just how complex the experience can become.
The expansion of aircraft design over the past three decades has been huge and many possibilities have opened up.  Thus our best sign is simple running lights to separate the true wheat from the chaff.  Without running lights of some kind you have an odd duck and a plausibly UFO.  With running lights do not be surprised if your eyes are fooling you.
.
Debunking my own UFO sighting, 14 years later


For years now, Crave's Eric Mack has been telling the story of the UFO he saw over a decade ago. Turns out he's probably had it all wrong that whole time.

Editors' note: Last week, Crave's Eric Mack looked at how ubiquitous and readily accessible online data and images from around the world and across the solar system have given rise to a whole new generation of alien conspiracy theorists and UFO spotters. Today he uses the same powers of the Internet to debunk his own UFO sighting from nearly 15 years ago.

When I arrived at the newsroom it was still more than an hour before dawn, and the other shift reporter who'd gotten there just moments before me was crying and hyperventilating.

Clearly, she had seen it too.

What we had both seen on the 7-mile drive from the college town of Columbia, Mo., to the university-owned television station where we worked a shift as journalism students in the year 2000 seemed to defy explanation.

It appeared to be a large, triangular craft that hovered less than 1,000 feet off the ground, blotting out the stars and leaving only the flashing white and red lights on each point of its three-sided form. It was silent, but as I've told the story over the past 14 years, I saw it quickly move in one direction, then the other, banking with incredible speed and agility before disappearing.

"How did it move like that?" shouted my teary-eyed classmate, that same shift reporter who had been driving in front of me on the way in to the station, her hand squeezing my arm as it trembled.

I had no idea, and for quite some time I had no explanation. That was perhaps the moment in my life that I could most easily believe anything was possible, including extraterrestrials who'd traveled light-years to do some extremely close-up reconnaissance of empty fields and a tiny television studio in the 137th largest media market in the United States.

A few years later, after 9/11 and the invasion of Afghanistan that followed, I read about how B-2 "stealth" bombers took off from Whiteman Air Force Base (not far from that tiny television studio) and flew round-trip 40-hour combat missions to Afghanistan and back. It began to seem that perhaps some odd formation of stealth bombers or a secret military craft was the most likely explanation for the strange lights I saw that morning in Missouri.

That's how I've been ending the story for over a decade now -- "So, I figure it was probably just some crazy military thing or something. Who knows what the Air Force may have been testing, right?"


Over the years, I've occasionally gone down the rabbit hole of researching what I saw online, and I'm sure you won't be surprised to learn that the triangular form making wild motions in the sky that my colleague and I saw (although it's more often reported just slowly drifting through the night) is among the more common types of UFO sightings in the United States. There were numerous such sightings reported in the area throughout my junior year of college.

In fact, one of the more infamous triangular UFO sightings in recent memory took place around that time just outside of St. Louis. On January 5, 2000 -- within a few months of my own sighting and just a few hours' drive to the west -- seven people, including four police officers, reported seeing a giant triangle with lights at the corners. According to the resulting police report, it was described as "a very large flying object...flying very low from 500 to 1,000 ft., and was flying very slowly. The object was making no noise."

Like me, the officers considered nearby military bases as a possible explanation for the strange craft -- radio transcripts show one of their first thoughts was to contact nearby Scott Air Force Base to see if it was missing any big cargo planes.


I first heard those transcripts read out loud on an October 7 episode of Skeptoid, a weekly science and skepticism podcast I often listen to, and my ears perked up, especially when I realized the date and geographic region matched up with the year and rough area of my own sighting. Skeptoid had arrived at a different, more mundane explanation for the odd triangular craft, however.

It's hard to prove what I saw was either a secret military aircraft or visiting extraterrestrials, but it's also hard to prove that it wasn't either of those things, particularly in the absence of other explanations. Cargo flights or passing satellites are among the potential explanations that local authorities have offered, but what I saw definitely does not fit the profile of either.

Skeptoid suggests another type of flying machine that does, but that I had never seen mentioned as a possible explanation, perhaps because it is so non-threatening and mundane: blimps.

The size, flashing lights and flight path of many of the triangular UFOs spotted in Illinois and Missouri while I was in college match the description of blimps in overnight transit between events in Indianapolis, St. Louis and Kansas City.

Interestingly, back then some local reporters did check with the Federal Aviation Administration, and the FAA actually cited advertising blimps as a likely explanation for the strange sightings, but it seems to have been buried by more sensational narratives involving alien craft or secret military testing, which I now know rarely happens outside of specific testing grounds in places like Nevada or here in New Mexico.

Blimps have been around for decades, just like sightings of these triangular, lighted UFOs. In fact, earlier this year, Goodyear announced its next-generation blimp, the company's first new airship design in almost half a century. It's bigger, faster and more efficient than its predecessors, and has already been making the rounds at sporting events this fall.


We can actually look at the schedule of this new blimp and others in the Goodyear fleet from last month and see some interesting correlations with the most recent sightings of triangular UFOs. For example, a triangular UFO described as a "self-illuminated dull-amber-color boomerang flying sporadically" was seen north of Miami over Lake Worth, Fla., early in the morning of November 11, the day before a Goodyear blimp was scheduled to be over Miami during an NBA game.

Across the country in Los Angeles County, another sighting on November 13 coincides with a scheduled blimp appearance in the neighborhood for the University of Southern California football game that evening.

But one thing doesn't fit, right? What about the sudden, quick motions of the triangular craft observed by my colleague and myself, as well as other witnesses?

As cool as it would be to think that someone, either in our own military or from another galaxy, has managed to construct a craft that skips across the sky using wormholes that open and then close after mere nanoseconds or something even crazier, there might be a simpler explanation.


And it's just as big a letdown as the realization that my top-secret military craft or alien UFO may have been just a blimp: it also could have been two blimps.

Two blimps flying in a formation or at least both visible from my perspective -- which was inside a car traveling at 60 miles per hour at 5 a.m. -- could easily explain what I saw when you factor in that some of the lights were blinking and that I was pretty groggy from just waking up.

Also, there were definitely no sonic booms accompanying movements that seemed to be a huge craft covering a few miles in a split second. In fact, traveling a mile per second -- which would be a very conservative estimate for the perceived motion of my UFO sighting -- would equal more than five times the speed of sound. Yet the huge craft remained silent as it appeared to make these maneuvers, which leads me to think in retrospect now that it never actually made them.

So to everyone whom I've spooked over the last 14 years or so with my tale of a UFO the size of a football field stalking small Midwestern communities, or of the insane new military technology that might be flinging it across the skies, mea culpa.

If anything, though, this ongoing tale of airborne mistaken identity is just getting going.

Last month, NASA announced that it may launch a challenge to design a high-altitude airship that could stay aloft for long durations as a research platform or perhaps to deliver Internet access, among other uses. These blimps would fly almost twice as high as commercial jets, so they likely won't add much to the list of UFO sightings. I can't say the same however for the beast described in the video below. Looks like there's a good chance I won't be the last to mistake what is basically a massive, lumbering balloon for something far more interesting.