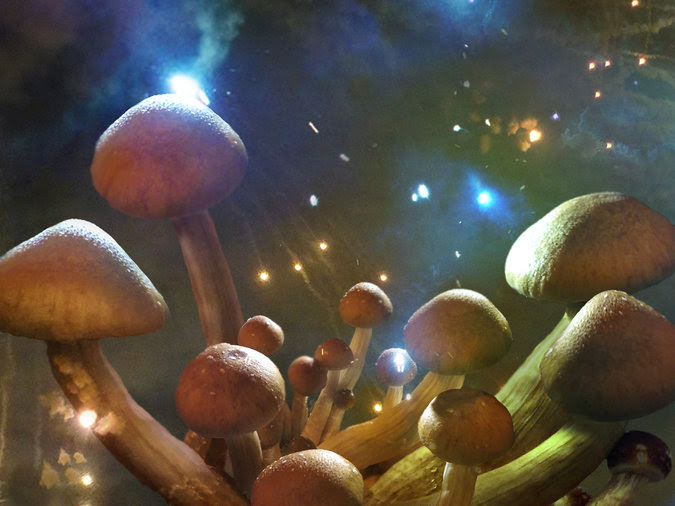 That last bit i highlighted strongly infers communication with the spirit to alter an improper outlook.  It is the best confirmation of the utility of this drug.  As well low doses are ample to facilitate healing from PTSD.
Plenty obviously needs to be done and we need to think out applying all such drugs far more universally as part of a brain modification protocol aimed at producing a superior life outcome for a huge portion of the population.

Would it not be neat to turn on the obsessive key in order to process a body of work and to then turn it off.  This would be hugely valuable and allow focus on superior program preparation.  My point is that we can start to imagine such protocols as feasible targets for further study.  I know that there has been dabbling along these lines.
.


I TRIED magic mushrooms out of curiosity and in middle age. I’d been on the amateur mycological circuit for a couple of years, but hallucinogenic species were rarely mentioned at the foraging expeditions and conferences I attended. It’s almost as if they were the black sheep of mycology: embarrassing to serious taxonomy jocks. I read some books on the subject, but most were tripper’s guides that didn’t utilize, um, specific language or current science. Psychoactive mushrooms had been in a kind of scientific ghetto ever since they were criminalized in 1968. But now the drug derived from the mushroom, psilocybin, is finally being re-examined for its medical applications.


A study published last month in the Journal of the Royal Society Interface compared M.R.I.s of the brains of subjects injected with psilocybin with scans of their normal brain activity. The brains on psilocybin showed radically different connectivity patterns between cortical regions (the parts thought to play an important role in consciousness). The researchers mapped out these connections, revealing the activity of new neural networks between otherwise disconnected brain regions.


The researchers suspect that these unusual connections may be responsible for the synesthetic experience trippers describe, of hearing colors, for example, and seeing sounds. The part of the brain that processes sound may be connecting to the part of the brain that processes sight. The study’s leader, Paul Expert at King’s College London, told me that his team doubted that this psilocybin-induced connectivity lasted. They think they are seeing a temporary modification of the subject’s brain function.


The fact that under the influence of psilocybin the brain temporarily behaves in a new way may be medically significant in treating psychological disorders like depression. “When suffering depression, people get stuck in a spiral of negative thoughts and cannot get out of it,” Dr. Expert said. “One can imagine that breaking any pattern that prevents a ‘proper’ functioning of the brain can be helpful.” Think of it as tripping a breaker or rebooting your computer.


Psilocybin is present in a wide range of mushrooms, especially in the genus Psilocybe, though why it exists in the mushroom is not fully understood. When ingested, psilocybin metabolizes to psilocin, which resembles the chemical structure of serotonin — a neurotransmitter that regulates mood, appetite, sleep, cognitive functions like memory and learning and feelings of pleasure. Psilocin may simulate serotonin, and stimulate serotonin receptors in the brain.


Psilocybin was first synthesized in the late 1950s, by the chemist Albert Hofmann (who also synthesized LSD from a fungus). In the years following its discovery, a number of studies were conducted, on psilocybin’s efficacy in treating alcoholism, as a tool in therapy and as a mechanism by which the terminally ill might better cope with despair. But clinical research into psilocybin became professionally marginalized, and research funding dried up about the same time it entered the mainstream as a recreational drug. Outlawed in 1968, it was swept up in the counterculture panic of the Nixon era and classified as a Schedule 1 drug, like heroin, under the Controlled Substances Act of 1970. A Schedule 1 drug means it is considered to have the highest potential for abuse and no currently accepted medical use.


It’s taken over four decades for the cultural taboo against psilocybin to relax enough for the drug to be re-examined for its medical applications, though a license to use it in a lab must be approved by the Drug Enforcement Administration and strict, time-consuming protocols must be met to ensure it is used safely. Still, doing this kind of research is no longer guaranteed to tank your career, and a small number of studies have been completed, with more underway, many of them building on the work accomplished by scientists in the 1960s.


A range of studies have suggested that controlled doses of psilocybin can help the user escape cognitive ruts of all sorts. One study, published in the British Journal of Psychiatry in 2012, rated the vividness of autobiographical memory of subjects on psilocybin and found the drug enhanced their recollection, and “subjective well-being” upon follow-up. The researchers concluded that psilocybin might be useful in psychotherapy as an adjunct therapy to help patients reverse “negative cognitive biases” — a phenomenon common in depression by which one has a greater recall of negative memories than positive ones — and facilitate the recall of important memories.[oh my]


Other studies have suggested that psilocybin may modify obsessive compulsion by reducing symptoms like repetitive counting or hand-washing, and in a paper published in Neurology in 2006, the authors interviewed cluster headache sufferers who had used psilocybin to treat their horrific condition, and learned that even low doses — less than is needed to actually trip — could bring about remission. (I also know someone who claims psilocybin cured his stuttering.) A study published last year in the journal Experimental Brain Research found that psilocybin eliminated conditioned fear responses in mice, which has implications for sufferers of PTSD. And psilocybin has been shown to relieve anxiety, depression and despair in terminal cancer patients, who describe their experience as giving them a new perspective on their lives.


Anecdotally, psychoactive mushrooms may positively affect even nonsufferers. They did for me. I ate the mushroom as part of research for a book. The experience lasted about four hours, much of which I spent outdoors, but seemed to last much longer. I think because everything I was seeing was so new: the way the air was disturbed behind the flight of a bee, the way the trees seemed to respire, how the clouds and breeze and rocks and grass all existed in a kind of churning symbiosis.


I experienced a number of small epiphanies — self-realizations actually — but one in particular remained with me. As the drug wore off, I went indoors to take a hot bath. For a moment I thought that might not be a good idea, as bath time is when women in middle age can be very self-critical and unforgiving, and I didn’t want the sight of my waistline to veer me into a bad trip. But while in the tub I envisioned my body as a ship that was taking me through life, and that made it beautiful. I stopped feeling guilty about growing older and regretful about losing my looks. Instead, I felt overwhelming gratitude. It was a tremendous relief that I still feel.


Psilocybin could have enormous impact on the lives of many Americans. But at the moment, its Schedule 1 status makes it a difficult drug to study, and only a handful of scientists are engaged in its research. This needs to change. Rescheduling psilocybin won’t make it legal; it will make it easier for research to be conducted, leading to more scientists exploring its potential, while reducing investor concern and allowing for compassionate use provisions.


Don’t get me wrong: I’m not suggesting 16-year-olds take magic mushrooms. I’m not suggesting they be used to party at all. What I am advocating for is a mind open to the possibilities of their use to help people in need. Because illiberality doesn’t cure disease; curiosity does.
Posted by arclein at 12:00 AM