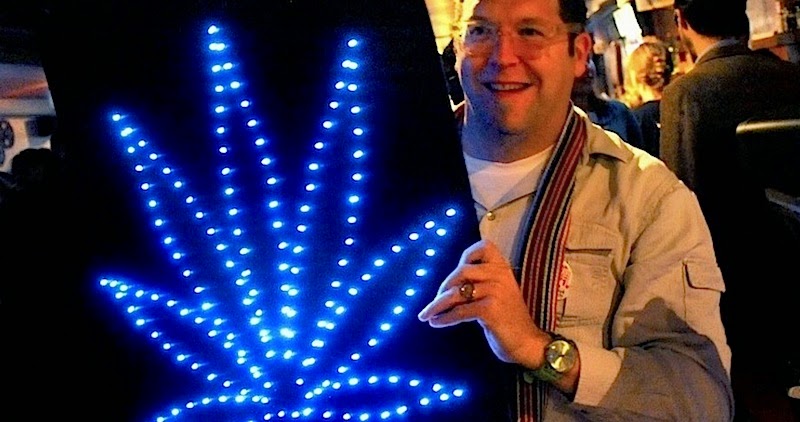 I personally grew up with a perceived truth drilled into me. It was simply that prohibition did not work and the side effects are awful. Thus while personally rejecting recreational drugs generally, I certainly have seen no reason to ever promote prohibition ever. Yet we then engaged in a fifty years repeat of prohibition with global consequences rather than National consequences.

It is now coming apart because the American taxpayer simply cannot continue to underwrite both the enforcement and the criminal community. Nor can all our allies and every other participant.

In the mean time there is ample data showing us how to get thing right as well. There are plenty of successes to emulate. What has been lacking is a astonishing lack of curiosity by those who directly can make decision but who also benefit from the status quo. Do they all have to lose family members to this scourge?

Last week's midterm elections prove that support for legalizing weed continues to grow. But progress has been rolled back before—it's important to remember how we got here if we're to keep moving forward.

.When I first started writing about drugs in the mid-’80s—before I got into recovery in 1988—it was almost impossible to imagine an America where four states and DC have legalized recreational marijuana use, 58% of Florida midterm voters just cast their ballots in favor of legalizing medical use (the measure needed 60% to pass), and California passed a ballot initiative to lower drug and other nonviolent crime sentences. (Nineteen other states have legalized medical marijuana.)
The magnitude of the change is hard to understand without knowing a bit of recent history—and if we are going to continue to move toward rational drug policy, knowing where we’ve been and how it has changed is critical. I offer this perspective through the lens of my own experience covering the drug war for nearly 30 years.

My first national column was called, embarrassingly enough, “Piss Patrol.” I was assigned by High Times to write about corporate urine testing policies, starting around 1987, presumably as a service to stoned readers who were considering their employment options.

Over the next few years, the media would spill so much ink and airtime demonizing crack cocaine that by 1989, 64% of people polled by CBS News said that drugs were the country’s biggest problem—and Republicans and Democrats began tripping over one another to race to pass the harshest possible drug sentencing laws.

High Times itself was targeted by the DEA with frequent demands for its list of subscribers and raids on all of its biggest advertisers of growing supplies, nearly forcing the magazine to close.

Mandatory minimum sentences were known to be ineffective. The federal government had overturned one set of them in the late ‘60s—since they had clearly failed to prevent the late ‘60s.

Testifying before Congress, LAPD chief Daryl Gates said that casual drug users “ought to be taken out and shot,” and the DARE drug prevention program he founded saw nothing ominous in encouraging kids to turn their parents in to the police if they used drugs. Supreme Court Justice Thurgood Marshall warned in a prescient 1989 dissent in a urine testing case that “there is no drug exception to the Constitution,” although Congress and the rest of the legal establishment apparently begged to differ.

Even today, police can confiscate cash and property they suspect to be involved in drug crimes, without convicting the owners and with virtual impunity. The surveillance revelations about the NSA’s spying on American citizens include cases where that agency has shared information with the DEA that was gathered from phones and computers without a warrant. In fact, the DEA has an official policy of basically lying to defense attorneys—and sometimes even prosecutors and judges—about the source of this data.

Yet even before the rage to pass tough drug laws took off in the 1980s, law enforcement efforts like mandatory minimum sentences were known to be ineffective. The federal government had quietly overturned one set of mandatory drug sentences in the late ‘60s—since they had clearly failed to prevent the late ‘60s.

And New York City would never have been one of the capitals of crack if the 15-to-life “Rockefeller law” mandatory sentences for selling even powder cocaine, which had been in place here since the mid-‘70s, actually suppressed drug use.

As is clear from this brief summary, for most of my adult life, the idea of a rational drug policy seemed literally to be a pipe dream (a term, by the way, from opium dens). So how did we go, in just a few years, from seeing drug users as demon enemies in a war who must be locked up to having the drug czar drop the military language and even speak at last month’s National Harm Reduction Conference in Baltimore?

Many factors are clearly playing a role. Two of the most obvious are the sheer economic burden of having become the world’s most prolific jailer and the drop in violent crime that hasn’t been paralleled by a fall in addiction rates or a reduction in the availability of drugs like marijuana, heroin and cocaine. Some of the crime decrease may, of course, be linked to the 500% rise in the number of prisoners since 1980—but research shows that violent crime fell more in states that have lowered incarceration rates.

Other influences have also been important. One has been the increasing recognition—driven especially by Michelle Alexander’s 2011 bestseller The New Jim Crow—of the racist nature of the drug war. When you know this history of the drug laws it is very hard to justify supporting them.

Another factor is the rise of the Internet. Early adopters of the net tended to be hippies and libertarians: Steve Jobs famously said that his use of LSD was one of the most important experience of his life, for example, and pro-legalization views dominated online before the mainstream media began to realize the web was the future of its business.

Historically, fights for drug law reform have often resulted in backlash—marijuana was almost legalized under President Jimmy Carter, but instead we got Ronald Reagan’s war on drugs.

This gave legalizers a loud voice—one that had been previously drowned out by a media that had so bought into the drug war thatnetworks and newsmagazines thought nothing of taking government payments to place stories with the “correct” anti-drug slant in lieu of running paid anti-drug ads.
The Internet has also allowed critics—including me—to directly attack inaccurate coverage as it appeared, exposing readers to truthful information about drugs and drug users that was previously hard to find. It is much harder to start a panic when debunkers immediately offer alternative perspectives.

Three other important forces should also be mentioned. First, the Drug Policy Alliance—helped by large donations from billionaire George Soros—spurred activism and funded ballot initiative measures that brought marijuana policy reform out of the fringes and into the mainstream.

Second, the harm reduction movement spurred by the AIDS epidemic quietly racked up successes. As it became clear that needle exchange hadn’t resulted in a massive increase in IV drug use—but had helped halt the spread of HIV—resistance to measures like naloxone to reverse overdose was pre-empted.

In contrast to the fight over needle exchange, when conservative politicians, drug treatment providers and religious leaders actively opposed expansion and claimed, without data, that it would encourage drug use, it’s actually hard now to find anyone who will argue that drug users and their families should not have access to the OD antidote for fear that preventing the deaths of users “sends the wrong message.”

Third, recovery activists have played a role. While there are still reactionary forces like Patrick Kennedy, many people who have come out about their own recovery have made clear that the criminal justice approach has failed. By putting a real face on drug users—not a stereotyped image of a criminal—recovering people have begun to help fight against, rather than support, their own oppression.

Of course, historically, fights for drug law reform have often resulted in backlash—marijuana was almost legalized, for example, under President Jimmy Carter, but instead we got Ronald Reagan’s war on drugs. But the strength and variety of the forces working against that possibility—particularly the rapid access to accurate information—give me hope that we may finally be starting to get drug policy right.

Maia Szalavitz is one of the nation’s leading neuroscience and addiction journalists, and a columnist at Substance.com. She has contributed to Time, the New York Times, Scientific American Mind, the Washington Post and many other publications. She has also published five books, including Help at Any Cost: How the Troubled-Teen Industry Cons Parents and Hurts Kids (Riverhead, 2006), and is currently finishing her sixth, Unbroken Brain, which examines why seeing addiction as a developmental or learning disorder can help us better understand, prevent and treat it. Her last column for Substance.com was about why it is time to reclaim the concept of “recovery” from the abstinence-only establishment.
Posted by arclein at 12:00 AM

Thank you Maia, for your considered response to an insane situation.

It is hard for me to believe that the powers-that-be have maintained drug prohibition for any reason less than creating the the opportunity for the minions of the state to exercise control over the private lives of millions of otherwise more-or-less law abiding citizens. Drug prohibition, including alcohol prohibition. has always been about the state exercising forceful control over it's subjects.

If the state voluntarily surrenders it's insane government-initiated civil war against the people a.k.a. "prohibition", you can be sure that it is because the powers-that-be have concluded that there is more potential control to be found in marketing drugs to us than in prohibiting them.

Thanks to our cowardly quiescence to many, many unconstitutional laws, we now essentially surrender our civil rights every time we step out of our homes. We provide and pay for the devices that allow us all to be tracked and monitored. We even voluntarily keep them charged up! We accept being bullied by government quislings as inevitable, even desirable (at least as long as the target is someone we find disagreeable in some way).

We Americans have (mostly) lost our courage and our way. As Ben warned us, we have traded an illusion of temporary safety for our essential liberty, and now we have neither liberty or safety.

Can we regain our lost freedom and liberty? Only by the age old proven methods, and it sure won't be pretty.