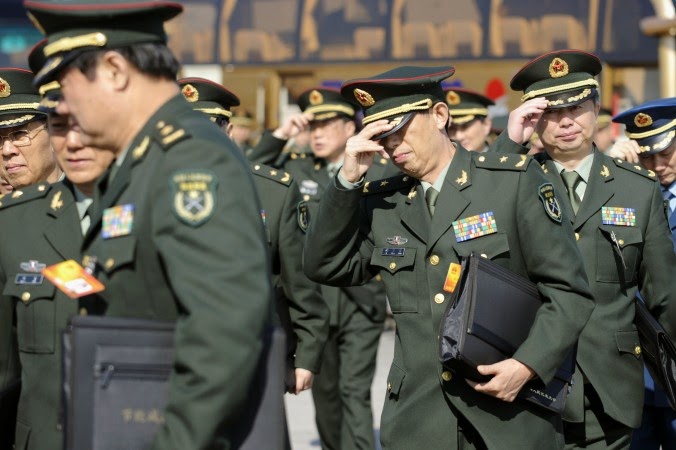 This is an old gag and the sheer effrontery takes your breathe away.   Yet you wonder just what they were thinking.  This only works in a well timed hit and run scam.  They appear to have forgotten that last little detail.

What makes it truly stupid is that they have invited the wrath of those on high who will certainly make it their business to bury them.  Can you imagine someone doing this to either the FBI or the CIA and expecting to get away with it?  As an aside we do have lone wolfs out there who have read too many novels and are really stupid enough to try.  I have met a couple fakers.  I have also met the real thing, all long retired and in their dotage i might add.

The party is over for these clowns.

Fake Military Leaders Scam Millions in China
http://www.theepochtimes.com/n3/1099618-fake-military-leaders-scam-millions-in-china/
A group of Chinese pretended to be high level military officers and established a fake headquarters in an eastern Chinese city, scamming 32 million yuan ($5.2 million) from 18 construction companies within three months, according to state-run news media.
A military office titled “East China Foundation for Defense Strategic Readiness Headquarters” was quietly settled in Penglai City of eastern China’s Shandong Province in February, according to state-run Qilu Evening News.
The group with only a few dozen of staff spent over a million yuan ($163,273) to rent an office, and hired security guards to stand outside of the office, dressing in camouflage uniforms like soldiers.
The office was fitted out with a fake warning sign “Military Site, No Admittance” at the gate, and a large slogan sign “Follow the party’s instruction, defend the territorial seas” on the top of the office building.
Several leaders of the group each had a fake but legitimate sounding title such as lieutenant of the Central Military Commission, Senior Colonel, and director of the Central Party School, etc.
Relying on the fake military title, the group sought construction companies to cooperate on projects of building a training base for the military, including building a firing range, hospitals, museums, and other military construction.
In giving permission to the construction companies to contract the projects, the group requested they contribute a large security deposit. In April, Mr. Shi in charge of an earthwork company who contracted with the group contacted the police after he was asked to pay a 10 million yuan (US$1.6 million) security deposit.
The police investigation shows that the “East China Foundation for Defense Strategic Readiness Headquarters” doesn’t exist, and the group is a fake.
The police raided the headquarters office in May, and arrested the group participants. The office not only looked like a real military headquarters on the surface, it also had fake military IDs, fake paper documents, and fake photos of the group members in military uniforms hanging on the walls.
Even the way the office was managed strictly followed the military order. The leader even ordered subordinates to be educated in classifying documents.

Some of the subordinates in the office were hired without being aware that it’s a fake organization. An arrested suspect deeply believed that his Central Military Commission boss would rescue him, the report says.
Chinese police arrested the last suspect in August, and three of the major leaders of the group are set to be prosecuted.
Posted by arclein at 12:00 AM