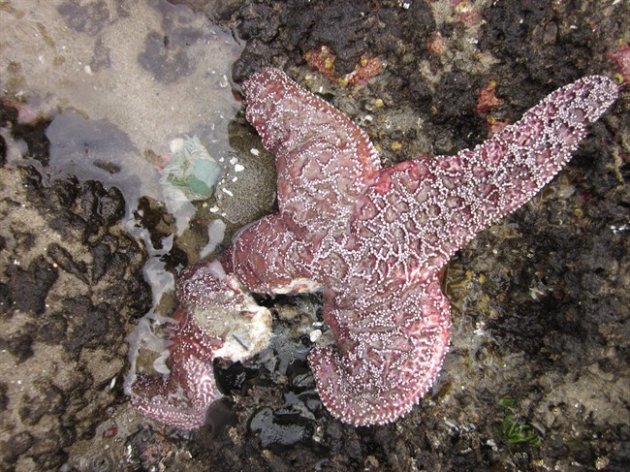 This is a real die off just like many other die offs that occur sporatically all over the world, often driven by infection, or at least finished off by infection.
This will certainly disturb the biome for some time as other species also explode and then collapse as the starfish come back.

At least there is no linkage to radioactivity as that group of cheerleaders like to claim.


The Canadian Press - An ochre sea star with one leg disintegrating from star wasting syndrome is pictured on the Oregon Coast on May 16, 2014. THE CANADIAN PRESS/AP, Oregon State University, Elizabeth Cher …


VANCOUVER - Scientists have cracked the mystery of what has killed millions of sea stars in waters off the Pacific coast, from British Columbia to Mexico.


He said the virus literally made what are commonly called star fish dissolve within two to 10 days after infection, leaving them in a pile of goo on the ocean floor.


Hewson is the lead author of a study along with Ben Miner of Western Washington University that was published Monday in the Proceedings of the National Academy of Sciences.


He said the wasting disease hit about 18 months ago, at a time when the number of sea stars inexplicably exploded.


Most viruses in nature are common and help keep dominant species in check, but he said divers reported seeing mountains of sea stars in the ocean around the time mass mortalities started occurring.


"This very high number of sea stars in the Pacific Northwest leading up to this disease epidemic probably is what exacerbated the virus and made the switch between something relatively benign into something that was totally virulent," Hewson said.


"A diver was telling me they were diving in Howe Sound and all of a sudden these sea stars started to fall down around them and there was this huge avalanche underwater," Hewison said from Brisbane, Australia.


Fishermen also reported a dramatic increase in the number of sea stars.


"It was getting to the point where it was actually causing big economic losses for the fishers up there. Essentially, they couldn't catch crabs because their traps were just totally clogged with these sea stars and they were becoming quite irate."


When sea stars also started dying at the aquariums in Vancouver and Seattle from water that was piped into tanks from the ocean, the mystery deepened.


"The disease was capable of moving into their facilities through intake pipes and made it past filtration systems that would otherwise remove very large particles," Hewson said.


However, sea stars that were in water that was ultraviolet-light treated and sterilized survived.


Researchers then took museum samples of sea stars from British Columbia to Baja, Calif., collected as far back as 1942, the 1980s and 1991, Hewson said.


The smoking gun was that healthy sea stars became sick within seven to 10 days of being injected with the virus from diseased sea stars. The experiment was repeated by transferring the virus from the ill animals into healthy ones, with the same results.


"We detected two of the five genes that the virus has, which gives us confidence that this is the same virus," Hewson said.


The deaths of hundreds of thousands, even millions, of sea stars has left an abundance of sea urchins, which would have served as meals for their voracious predators.


That in turn has impacted giant kelp, the dining choice for sea urchins.


The number of sea stars has slowly started to recover in Oregon, and will take several years to return to normal along the Pacific coast, Hewson said.


"We are so new to this outbreak even a year on that we haven't had a chance to observe any of the long-term impact."


Dr. Martin Haulena, a veterinarian at the Vancouver Aquarium, one of the aquariums that offered samples for the study, said sunflower sea stars were affected very quickly by the virus that caused such huge die-offs that may be part of the normal boom-and-bust cycle of nature.


"There's been supposition that urchins would take over where sea stars used to be," he said, adding long-term monitoring will be needed to determine the impact of the virus.
Posted by arclein at 12:00 AM