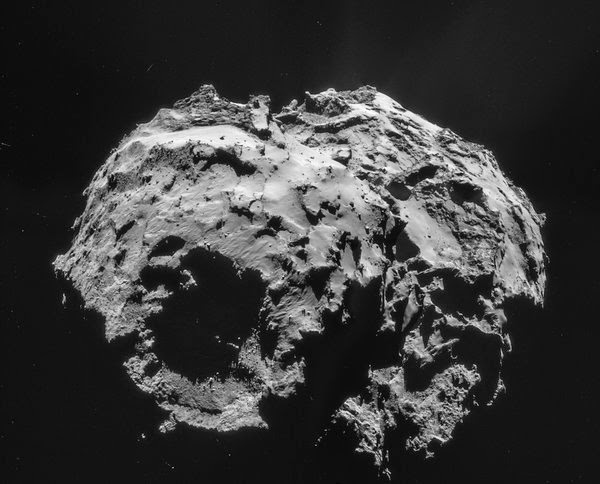 This is good news as it puts aside decades of speculation.  Of course it opens up other questions..Importantly all the data, scant as it is conforms to the out of Jupiter conjecture.  In that case.  In that scenario, Jupiter passed though its dynamic stability point a number of times to produce our planets as the solar system shaped up.   We also strongly suspect that Venus is the late comer and may have been triggered deliberately as well.

Jupiter is a natural planet incubator and only needs a little additional mass to pump out an earth sized planet.

At the same time water is integral but scant.  Yet that is what we have.  It is highly unlikely that well over 90% of Earth has any water at all and the rest,l while not dry is a small real fraction.  Thus we only needed much less than one percent of gross mass..   .

One of the first scientific findings to emerge from close-up study of a comet has all but settled a question that planetary scientists have debated for decades.


The new finding, from the European Space Agency’s mission to the little duck-shaped comet called 67P/Churyumov-Gerasimenko, appears to eliminate the possibility that the water in Earth’s oceans came from melted comets.


Water vapor streaming off the comet contains a higher fraction of “heavy hydrogen” than the water on Earth does, scientists reported on Wednesday.


“That now probably rules out” comets as the primary source of terrestrial water, said Kathrin Altwegg, a scientist at the University of Bern in Switzerland and the principal investigator for the Rosetta instrument that made the measurements.


The new findings, published in the journal Science, came after Rosetta arrived at Comet 67P in August, close enough for the instrument to begin detailed analysis of the molecules coming off the comet. Earlier, the same instrument discovered that the comet exuded the scents of formaldehyde and rotten eggs.

“It’s a nice start to this phase of the mission,” Matt Taylor, the project scientist, said of the water findings.


With Earth’s water a puzzle, scientists had long presumed that the planet was dry when it formed 4.5 billion years ago, and that the water came later, perhaps during the “late heavy bombardment” period more than 3.8 billion years ago. Comets, often called dirty snowballs, seemed a likely candidate.


Comets originate from two places in the solar system: the Kuiper belt, a ring of icy debris just beyond the orbit of Neptune; and the Oort cloud, a spherical shell of frozen detritus much farther out. Asteroids are rocky bodies in the inner solar system, mostly between the orbits of Mars and Jupiter.


But comets’ water turned out to be different from Earth’s. A few water molecules have a heavier version of hydrogen called deuterium that replaces one of the two hydrogen atoms, forming what is known as heavy water. On Earth, about one in 6,000 water molecules contains deuterium.

Oort cloud comets, it turns out, have twice the concentration of heavy water found in Earth water. Thus, when the Rosetta spacecraft was launched in 2004, most planetary scientists had already crossed comets off the list of possibilities.

But in 2011, a team using the Herschel Space Observatory, an infrared telescope operated by the European Space Agency, took a look at water vapor from the comet Hartley 2 and found that its deuterium signal perfectly matched Earth’s water. That opened the possibility that Earth’s water could have come from Kuiper belt comets or those even closer, like Hartley 2, whose orbit does not go much farther out than Jupiter’s.

“A lot of people thought that meant comets were back in play,” said Conel Alexander, a scientist at the Carnegie Institution for Science in Washington.

The new measurements of 67P, another Jupiter-family comet, appear to rule out comets again. Its fraction of heavy water is three times that of Earth, higher than those of the Oort cloud comets.


“Ten years ago I would not have been surprised at all by this result, because that’s what I expected,” Dr. Altwegg said. “But then three years ago we got this Hartley 2 measurement, and that was a real big surprise. Now we’re back to what I actually expected.”

Much of the solar system’s water, including up to half of Earth’s, appears to predate the solar system, formed within expanses of interstellar space billions of years ago. The sun, like the universe over all, has very low levels of deuterium, about one-tenth as much as what is found in Earth’s water.


However, under certain conditions — cold temperatures along with radiation that knocks electrons from hydrogen — chemical reactions create water molecules with a much higher fraction of deuterium.


In a paper published in Science in September, scientists led by L. Ilsedore Cleeves, a graduate student at the University of Michigan, found that these conditions did not exist in the early solar system, so the high-deuterium water must have been present in the cloud of matter that collapsed to form the solar system. While the outer solar system was cold enough, the radiation was lacking.


“Our paper showed that the outer part of the disk cannot be an engine for creating the deuterium fingerprint,” said Edwin A. Bergin, a professor of astronomy at Michigan who was another of the paper’s authors.


Recent studies on meteorites — pieces of asteroids that fell to Earth — paint a very different history of water. Scientists had thought the newborn Earth was dry, because it formed within the solar system’s “snow line,” where the temperatures are too warm for water ice to exist in the vacuum of space.


In 2012, Dr. Alexander of the Carnegie Institution and his colleagues published a Science paper finding that some types of meteorites, in particular a class of primitive ones that formed beyond the snow line, have deuterium levels similar to Earth’s.


In October, in another Science paper, researchers found that meteorites that originated from the large asteroid Vesta, which is believed to have formed inside of the snow line, also possess Earthlike deuterium levels. These scientists believe that ice-rich asteroids from outside the snow line were pushed inward and were among the pieces that combined to form Vesta and Earth hundreds of millions of years before the late heavy bombardment.


In other words, Earth may have been wet from almost the beginning.
Posted by arclein at 12:00 AM

Indeed, Velikovsky was correct -0 and so is the new paradigm of the electric universe. We inhabit an infinite living cosmos of vast electromagnetic currents, not some dead and dying ash ball en route to heat death.