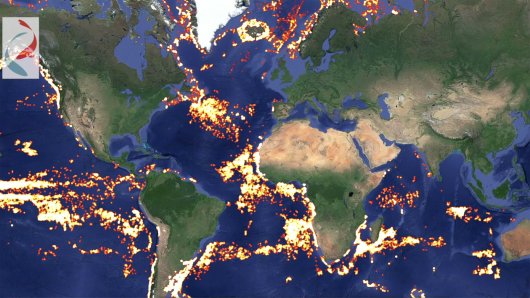 We are actually going to know what is going on.  From there it is a short step to regulatory confrontation and real management.  I do not think that we are going to really win this battle but i will take a serious slow down that allows significant recovery.
Recall that the greatest fishery in the world on the Grand Banks has never recovered and it is now a whole generation.  Other great fisheries have not recovered either.  All were abandoned because they simply ceased to produce.  In most we had the pathetic sight of regulators slamming shut the barn door.
Real victory is coming steadily by the dominant emergence of the farmed fishery which has now the competitive advantage.  It can also lobby for regulation to take out the wild fishery.  This is bound to happen.  Sooner or later the wild fishery must dwindle to well under twenty percent market share and then it no longer looms large and can not meet regulatory needs.
We really do not eat wild pig although we should and really could have it more readily available.

Google helped develop the new tool, which aims to help tackle the problem of overfishing


Google has partnered with SkyTruth and Oceana to produce a new tool to track global fishing activity. Known as Global Fishing Watch, the interactive web tool uses satellite data to provide detailed vessel tracking, and aims to harness the power of citizen engagement to tackle the issue of overfishing.


According to the United Nations Food and Agriculture Organization, more than 90 percent of the world’s fisheries are working at peak capacity, with as much as one-third of marine fish stocks now suffering from overfishing.


Though a clear issue, the distant and out-of-sight nature of commercial fishing creates a problem when it comes to accountability. To help combat this, Google has teamed up with marine advocacy group Oceana and mapping company SkyTruth to develop the Global Fishing Watch – a tool that allows anyone with an internet connection access to the timing and position of intensive fishing around the world.


Currently in the prototype stage, the tool makes use of Automatic Identification System (AIS) satellite location data – a tool initially designed to help avoid maritime collisions. The system analyses the movement pattern of each ship to determine whether it is indeed a fishing vessel, before plotting its activity on an interactive map.

While the current version of Global Fishing Watch initially plotted the activities of a whopping 111,374 ships, the team has since whittled down that number, with the initial fishing activity map containing 3,125 ships, with some 35 million data points. It shows data from 2013-14, and includes ships that the team has independently verified as fishing vessels.


The tool shows users the number of hours that individual ships spent fishing certain areas, and allows almost anyone to explore global fishing activity. Users can filter data by country, and can even look at the route taken by individual vessels, with a data point being created every time a ship sets and retrieves its lines.


In the long run, it provides fisherman and companies with an opportunity to illustrate that they’re obeying the law in regard to overfishing. It will also likely prove a useful tool for researchers, who will be able to access a comprehensive database of global fishing activity, with data spanning back for years.


For a closer look at the project, check out the video below.


Source: Global Fishing Watch
Posted by arclein at 12:00 AM