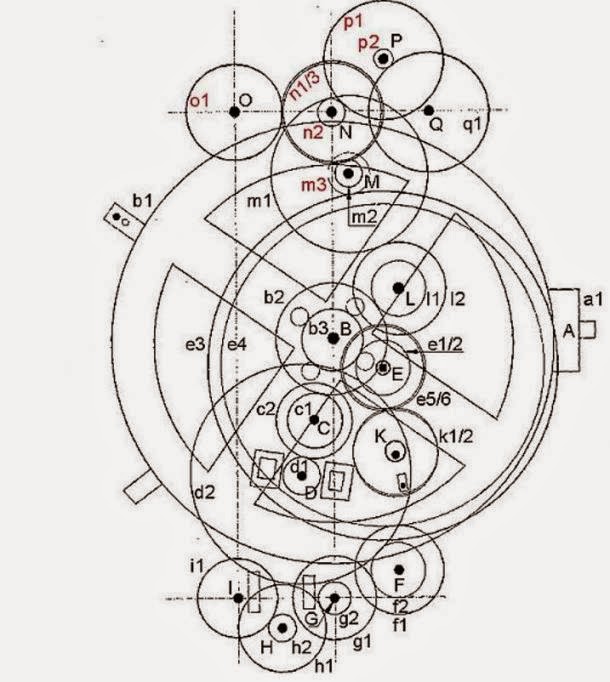 It is always welcome to see another date locked down because it helps correct Carbon 14 Dating.  Usually we are relying on tree rings.


The level of metal working skill is impressive and predates modern capability in the seventeenth century by around eighteen hundred years.  Yet that is also an indicator of need and demand.  I have no reason to think that the skills ever went away even as mere jewelers.


This is all about simple metal cutting and shaping with fine filing which are all Bronze Age skills.  The challenge is in the calculations and those go back into the deep bronze age as well. This was obviously an expensive and rare tool for its time and place.  Someone important was on the ship.

A new study of the world famous Antikythera mechanism has revealed fascinating new information about the puzzling artifact, including that the maths used for its eclipse prediction appears to be based on Babylonian arithmetic rather than Greek trigonometry.  A detailed analysis of the eclipse predictor has also enabled scientists to determine that the device’s astronomical calculations started in 205 BC, enabling the first accurate dating of the mechanism. If this is correct, it makes it highly unlikely that its creator was the renowned ancient Greek inventor Archimedes.

The Antikythera mechanism was discovered in 1900 during the recovery of a shipwreck off of the Greek island, Antikythera, in waters 60 meters deep. The metallic device consists of  37 different types of gears and is so complex that many consider it to be the first human-made analogue computer. After decades of research, scientists were able to determine that it shows the positions of the sun, moon, and planets as they move through the zodiac, predicts solar and lunar eclipses, and even marked key events such as the Pan-Hellenic games. Scientists have claimed that the complex assemblage of bronze gears predates other similar types of technology by 1,000 years.

Representatives of the Greek government, the crew and the sponge divers on the deck of the Greek navy ship Mykali in winter 1900/1901, pulling up objects from the Antikythera shipwreck (Wikimedia).

Archaeologists and historians have long debated when the device was built and by whom.  “Given its sophistication, some experts believe it must have been influenced, at least, by one of a small pantheon of legendary Greek scientists – perhaps Archimedes, Hipparchus, or Posidonius,” writes the New York Times.

References to complex astronomical mechanisms in the works of ancient writers, has led to some of the above proposals being made. For example, Roman politician and philosopher, Cicero (106 – 43 BC), refers to an instrument that reproduced the motions of the sun and the five planets. The device Cicero described, which many believe was the Antikythera mechanism, was built by Archimedes.  However, the latest analysis challenges this assumption, revealing that the device may be even older than first thought.

The new study, published in the journal Archive for History of Exact Science, involved a detailed look at the Saros dial (eclipse predictor) of the Antikythera mechanism. Their results revealed that the prediction calendar includes a solar eclipse that occurred on May 12, 205 BC. This suggests that the device is at least this old, and may in fact be the year of its creation. Researchers had previously dated the mechanism to around 100 to 150 BC based on  radiocarbon dating and an analysis of the Greek letters inscribed on the device. However, the new date pushes the origin back by 50 to 100 years, and suggests that Archimedes is unlikely to be its creator, as he was killed in 212 BC, seven years prior to the new date of 205 BC.

The study also supports the idea that the maths used for eclipse prediction was based on Babylonian arithmetical models borrowed by the Greeks. “We… find that a Babylonian-style arithmetical scheme employing an equation of center and daily velocities would match the inscribed times of day quite well,” write the study authors. “Indeed, an arithmetic scheme for the eclipse times matches the evidence somewhat better than does a [Greek] trigonometric model.”

Last month, an expedition returned to the Antikythera shipwreck—with the aid of a high-tech exosuit—and recovered tableware, ship components, and a giant bronze spear that would have belonged to a life-sized warrior statue. A new investigation is planned for early next year and it is hoped the exploration may reveal more about this unique piece of advanced ancient technology.