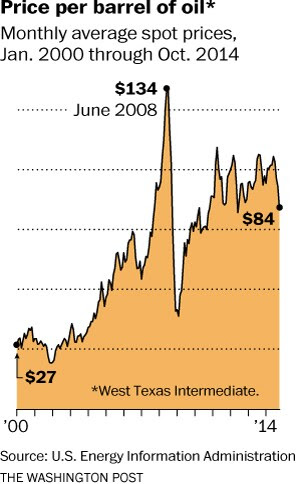 This break is important.  It is not a response to fleeting news or unrelated actions.  it has to do with the developed reality that $90 oil is developing unlimited supply by way of shale oil in particular.  That is just beginning.  With a wall of oil at $90 a price reversal was inevitable.  We can then expect price stability to be established at between $50 and $60.

This will allow costs to be brought back in line and excessive capitalization to be wrung out of the market.  This is still only double what was paid during the last two decades of the twentieth century so this represents a return to general price stability.

More important it restores US competitive advantage and humbles the nouveau riche of the so called oil states.  The USA balance of payments will continue to steadily improve.  It will even allow the Keystone pipeline to be built on its original budget.

Even better, it restores the internal profitability of the West itself and ends this protracted recession.

As oil prices plunge, wide-ranging effects for consumers and the global economy


An oil pump works at sunset in the desert oil fields of Sakhir, Bahrain, in October. The price of oil has fallen about 40 percent since mid-June. (Hasan Jamali/AP)

Tumbling oil prices are draining hundreds of billions of dollars from the coffers of oil-rich exporters and oil companies and injecting a much-needed boost for ailing economies in Europe and Japan — and for American consumers at the start of the peak shopping season.

The result could be one of the biggest transfers of wealth in history, potentially reshaping everything from talks over Iran’s nuclear program to the Federal Reserve’s policies to further rejuvenate the U.S. economy.

The price of oil has declined about 40 percent since its peak in mid-June and plunged last week after the Organization of the Petroleum Exporting Countries voted to continue to pump at the same rate. That continued a trend driven by a weak global economy and expanding U.S. domestic energy supplies.

The question facing investors, companies and policymakers is how low oil prices will go — and for how long. Every day, American motorists are saving $630 million on gasoline compared with what they paid at June prices, and they would get a $230 billion windfall if prices were to stay this low for a year. The vast majority of that will flow into the economy, with lower-income households living on tight budgets likely to use money not otherwise spent on gas to buy groceries, clothing and other staples.

On Monday, the average U.S. price for a gallon of regular-grade gasoline was $2.77, according to AAA, which projects that prices could drop by an additional 10 to 20 cents.
(The Washington Post)

Big American companies are better off, too. Every penny the price of jet fuel declines means savings of $40 million for Delta Air Lines, the company’s chief executive said in a recent CBS interview.


“Despite the impressive recent gains in natural gas and crude oil production, the U.S. still is a net importer of energy,” William C. Dudley, president of the Federal Reserve Bank of New York, said Monday at Bernard Baruch College. “As a result, falling energy prices are beneficial for our economy and should be a strong spur to consumer spending.”

Although falling oil prices lower inflation, the Federal Reserve tends to view that as a fleeting effect that would not alter its underlying judgments about policy. Nonetheless, Dudley said, “the slump in oil prices may also help to persuade” the European and Japanese central banks to implement further monetary easing as prices remain subdued.

The consequences of the decline in oil prices are also evident in politics and pocketbooks.

At current prices, the annual revenue of OPEC members would shrink by $590 billion, money that will instead stay within the borders of the world’s biggest oil importers, led by the United States, China and Japan.

The size of the global economy will “easily be between 0.5 percent and 1.0 percent higher as a result of the decline in oil prices,” wrote Andrew Kenningham, senior global economist for London-based Capital Economics.

The 40 percent drop in the price of the international benchmark Brent-grade crude oil over the past five months will reduce annual revenue to oil producers worldwide by a whopping $1.5 trillion.

The losers include Russia, where the value of the ruble has been crumbling, inflation has crept up to more than an 8 percent rate and oil prices have done more to hurt the economy than Western sanctions.

In Iran, whose economy and government budget rely heavily on oil sales, low prices could intensify the effect of sanctions that have curbed the country’s oil exports in an effort to pressure the regime into reaching a diplomatic accord on its nuclear program.

In Venezuela, dwindling oil revenue has exacerbated an economic crisis that is also tied to fuel subsidies, price controls and generous social programs.

In the United States, there are losers, too — mostly in the oil patch. The oil services giant Halliburton has lost 44 percent of its value since July 23. Heavily indebted Continental Resources, a huge shale oil producer in North Dakota’s Bakken region, has lost half its value since Aug. 29. Even BP, a big, integrated firm, has lost a quarter of its value in just the past few months.

“It happened so fast, it’s been a shock to the system,” said Scott D. Sheffield, chief executive of Pioneer Natural Resources. Sheffield said that if oil prices had stayed between $90 and $100 a barrel, Pioneer would have added 10 new rigs to its fleet of 40, nearly all drilling shale oil wells. Now he is going to wait and see before announcing capital spending plans in February.

The prospect of low oil prices over an extended period grew much stronger last week after OPEC opted to maintain output instead of paring back to prop up prices.

Saudi Arabia, OPEC’s swing producer, with about 9.7 million barrels of production a day, has usually adjusted its output to moderate lurches in oil prices. But the kingdom has grown worried that production will continue to grow outside OPEC, reducing the cartel to a smaller and smaller share of the global market. So Saudi Arabia has chosen to fight for market share by letting prices slide.

That could jump-start global oil demand, currently about 94 million barrels a day. But it could also slow down or halt the growth in global oil supplies.

The biggest target of this strategy: U.S. shale oil, which has grown from a negligible amount six years ago to 4 million barrels a day, nearly half of U.S. production and more than any OPEC member except Saudi Arabia. Other high-cost oil projects, such as Canada’s oil sands, could also be curtailed or postponed.

But oil prices have historically swung from one extreme to another; it takes years for price signals to change exploration plans and production levels. U.S. exploration firms might be able to withstand lower oil prices than OPEC members that need oil revenue to balance their budgets and keep their citizens content. A Citibank analysis says that current prices will not eliminate growth in U.S. shale oil output, only trim that growth by 30 percent.

Within OPEC, there was discord. “It is not good for OPEC,” Iranian oil minister Bijan Namdar Zanganeh said in an interview with the newsletter Argus Global Markets. “Some of our colleagues in OPEC believe they should wait and see what the market reaction is, especially in U.S. shale investment.” He added that “it’s a very risky issue” and could require “years, not months.”

There are risks in the United States, too. Kathy Jones, fixed-income strategist at Charles Schwab, said that while lower oil prices will boost consumer spending, which makes up 68 percent of the U.S. economy, it could also hurt investment, which runs high in the petroleum business. She also noted that oil and gas companies account for 15 percent of the Barclays U.S. high-yield index, double what it was a few years ago.

“High yield means more highly leveraged, and we don’t know what a 30 or 40 percent drop in oil prices will mean,” Jones said. “It’s going to show up in places, I’m sure. It’s just a question of where.”
The Fed’s Dudley was less concerned. “Even after the large gains in recent years, oil and gas investment remains a small fraction of GDP,” he said.

On Monday, traders and investors struggled to grasp OPEC’s stance; prices slid then rebounded sharply to $69 a barrel.

Although analysts said that global production is running about 2 million barrels a day over consumption, barely 2 percent of world demand, slight economic changes or a renewal of paralyzing civil strife in Libya could shrink that extra margin.

On the other hand, the sudden glut — while small — could grow even larger if Libya restores more of its former production, Iraq continues to expand output from its low-cost reservoirs and Iran strikes a deal over its nuclear program that would lift sanctions and permit a jump in exports.

That has left people guessing. Richard Anderson, chief executive of Delta Air Lines, said on “CBS This Morning” on Nov. 25 that the airline was planning on jet fuel costing $2.80 a gallon in 2015, though he acknowledged that “all this is a bit of a thumb in the wind.”

Robert McNally, president of the Rapidan Group consulting firm, said OPEC seemed to be letting non-OPEC countries resolve the market surplus and surprised the industry by not scheduling another meeting until June 5. “This was about as bearish a signal as OPEC could have sent to the market,” he said.
Posted by arclein at 12:00 AM