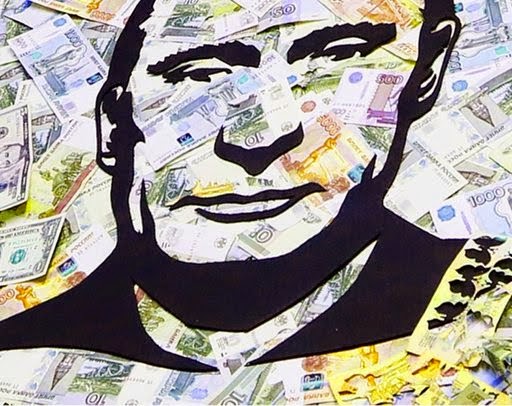 Russia is once again going to the wall with its currency.  A lot of this is been caused by the sharp drop in oil pricing along with Putin's bout of ill timed adventurism in the Ukraine.  The internal economy it far to fragile to allow easy recovery from such shocks and ghere we have two back to back.
Take oil out of the economic equation and the top down system is completely unfunded.  That risk may seem remote today but that is going to be the big story over the next decade as the public finds itself able to shed monopoly pricing.
Putin himself is still okay, but the internal situation will become demanding for everyone and he certainly lacks solutions or even vision beyond the failed past.


Ilya Naymushin/Reuters/Amanda Macias/Business Insider An artwork depicting a portrait of Russian President Vladimir Putin based on a layer of US dollars and Russian roubles.


In his annual address to the nation on Thursday, Russian President Vladimir Putin announced that the country's reserve funds, usually earmarked for investment in state projects, should be used to bail out troubled Russian banks. In doing so he revealed just how grim the prospects for financial institutions have become following the rouble's collapse. The Russian private sector appears to be on state-funded life support.


In particular, the move strongly suggests that the Russian banking system has been running out of collateral that can be used to get dollars from the central bank. Access to dollars is critical because the banks took out foreign-currency loans from investors that they have to pay back in the same currency. Current estimates suggest Russian businesses need to repay $35 billion this month.


But Russian banks face major challenges funding this, with Western sanctions freezing them out of global capital markets on the one hand and a weakening domestic economy putting pressure on profits on the other. These issues have been compounded by a fall of about 40% in the value of the rouble since June. As the rouble loses ground to foreign currency, those debts become increasingly difficult to pay back.


Usually it is the job of the central bank to provide emergency funding for a country's financial institutions. In Russia this is typically done through what are known as "currency repo auctions," in which banks offer collateral (like high-quality bonds) in exchange for access to currency, especially dollars, that they need to meet foreign-currency obligations.


However, this facility has seen limited use by Russian banks despite the rouble falls. The central bank had tried to explain this by saying low demand was a consequence of there being plenty of dollar liquidity in the financial system.


Putin's statement that the country's reserve funds should be used instead to back its banks strongly suggests that this claim was wrong. There was not a lack of demand — rather, the banks' collateral was insufficient to get dollars in exchange.


On Thursday the Russian central bank cut the foreign exchange repo rate, the interest rate it charges on the currency it gives to banks. The rate fell from 1.5% above the London Interbank Offered Rate (Libor) — the benchmark interest rate at which banks lend to one another — to 0.5% above Libor. A lower interest rate should make it less expensive for banks to borrow from the central bank and therefore more appealing.


The rate cut illustrates that the central bank is growing concerned about the ability of Russian banks to meet their debt repayments. If they fail to pay, it could trigger a wave of defaults that would further hit the fragile Russian economy, which is already expected to fall into a recession in 2015.


Yet if the problem is a shortage of collateral, these measures are unlikely to be enough. Back in February, JPMorgan analysts warned of just such a scenario: about 60% of available collateral was already pledged of an upper limit of about 75%. That top level is the point at which JPM says the stress in the banking system, in the form of increased risk of default, may start rising rapidly.


We appear to be near that point.


Judging by Thursday's news, banks appear to have been forced instead to seek help from the state.


This would explain Putin's move to divert money usually earmarked for infrastructure investment (for example, in Russia's ageing road and rail network) into a bank bailout. Here's the passage from his speech:

Reuters reports that VTB and Gazprombank have already applied for 250 billion roubles ($4.7 billion) and up to 100 billion roubles in additional support. This would put a further dent in Russia's reserves after the country saw total international reserves drop some $90 billion so far in 2014, mostly in failed attempts to buoy the rouble.


It might also open the door for non-bank companies to lobby for additional support. The oil company Rosneft requested 2 trillion roubles last month but was turned down.