The Monster Down the Trail 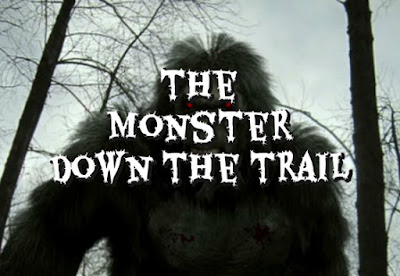 This is a discovery of the dening area of a Giant Sloth.  Two animal corpses are laid out for maggot harvesting and the Giant Sloth reacted to scare of interlopers as was also reported in another similar situation in which folks died.  Without understanding the lifeway of the Giant sloth this story is impossible to understand.  It is not a Bigfoot.

That it was knocking down trees was to scare what was a fairly large group of boys.  It worked of course.  And under no circumstances do you go in there alone.

We get clear confirmation that it took a cow and a deer.  The cow likely weighed around a thousand pounds which is a pretty good estimate of the creature's strength.  This one was actually much bigger than most we have come across, but it is not unusual in the fossil record.  It would have also carried the body back to the dening location.  It may well have first consumed the entrails before that happened.  The rest of the observed deer could also be cached under the loam as well.


The Monster Down the Trail

Scott told of his encounter in Everett, Washington in the mid 90s:

“I was younger, about 14 years old and we all decided to go for a little ride on our dirt bikes. I think there was Jason, Chad... there was probably about five of us, me being the youngest. Well, Chad was same age as me and there's another guy, Jason, he was about 18 years old. My brother is three years older than me. He was there too and Trevor, Eric, yeah, there's quite a few of us. So we're out riding dirt bikes, you know, and, of course, we want to find a place where we can smoke cigarettes because we're young and we want to hide. Jason bought the cigarettes because, you know, he's of age. So I was on my mom's four-wheeler and my brother and them they were on their dirt bikes.

We lived out in a long road, farm fields, out in the middle of the woods, pretty far out of town - our house was on the river. So we find this trail back behind this old abandoned barn and we go down it and then we come to this big clearing. There's like a big open area, it looks like a pit kind-of - a perfect spot! So, you know, we all jump off our motorcycles and we're chilling, talking, bullshitting and walking around smoking cigarettes and we see a little trail. Well, it wasn't too little, I mean, it was probably, I don't know, three people could stand side-by-side, you know, next to each other and walk down this trail. It was pretty beaten down. We didn't think about that it was obviously way too big for like a deer or like that. So we get walking down this trail and Chad's like, 'Oh dude, what the hell, look at this sh*t!' So we all walk over there you know and we look and there's a cow, a dead cow, and it's off in the bushes and it's got the head ripped off and some of the stomach, it wasn't all ripped open but some of the stomach was. It had been there awhile. We walk down a little bit farther and we found a deer head. We didn't find the body. It had antlers on it and that was a weird thing and then Jason's like, 'Holy sh*t, you know, I wonder if a bears been back here or something.' But, you know, all the years of living out there, I seen one bear. It was across the river in there, a black bear and I've never seen a bear or heard of a bear ripping a deer's head off. I haven't. But we thought, 'Oh yeah, it's a bear, right' and now that I'm older I think that was stupid.

So we're walking down this trail, thinking, 'Wow, this is crazy' and all of a sudden we hear these big thuds like BOOM BOOM. Now that was weird. We're like, 'Whoa, what was that?' I mean the trees are probably about that big around – 15 inches - you know, they weren't huge trees, but they're about that big around, you know, tall skinny ones. I forget what kind of trees they are, maybe old cotton or rather little baby cottonwoods. I don't know, but they're pretty tall and we're standing there we heard these big thuds. We're looking, of course, you'll be looking around if you're in the middle of the woods. All of a sudden just BOOM BOOM BOOM BOOM BOOM BOOM. I mean, it's loud. It's big bangs coming through the woods and then all of a sudden you could see the trees coming from a distance they're moving over like, you know, they're not falling down but they're moving out of the way like something's like running through the woods and all we see coming through the bushes was this big black thing and I'm gonna tell you my friends, this was no bear. This sumbitch was tall, huge and the running it was making, I mean, these were goddamn thuds BOOM BOOM BOOM BOOM and you could hear trees crashing, pushing over and we hightailed it. We ran so fast, we ran past the motorcycles and left them in the woods.

Yeah, it was ridiculous. So we ran home. We tell my dad, you know, there's something in the woods. It's huge, you know, we didn't tell them it was Bigfoot or whatever. We were thinking, 'Oh my god this thing's huge!' and my dad's like, 'I can't believe you idiots left your dirt bikes in the woods. I don't know what the hell you guys are dreaming or smoking.' So anyway, we tell him, you know, we are not going back into those woods and, you know, we got Jason and he's way older than us and he's telling him, 'Hey man,' he's on my dad, 'There's something in them woods! Something huge is back there!' There's dead sh*t everywhere!' I mean, it was ridiculous, and the way these trees were moving to the side BOOM BOOM BOOM what else would it have been? I mean this thing was huge. It was big, black, we didn't, you know, get to see the face, obviously.

We're not going back into the woods by ourselves, you know, we were scared. So my dad gets his rifle and we go down there and we show my dad the trail and he was like, 'Wow, this is weird!' Nothing came back out. We didn't see anything else. We walked my dad down the trail and, yeah, the trees were pushed to the side. There was this log about the same size as the trees, it was falling down in between the stump and the riverbed, broken. It was broken in half, like something ran right through it because there's a tree it was just like laying across the ground. It's probably about three or four feet in the air how it came across and landed on the stump. So it must have been a tree that fell or whatever. It just ran right through that son-of-a-bitch. I mean it ran right through it and the trees were kind of bent like, you know, like they got bent over a little bit and you can see that the dirt was a little bit up. It was pretty bizarre. My dad did say 'I wonder if it was a Bigfoot.' Then, you know, we thought, Hmm, oh yeah, you know, being kids, Bigfoot, but we did here at my dad's house, even the neighbors had said sh*t about it, about you could hear this screaming. It wasn't a cougar. It was the weirdest noise and now that I'm older, I guess, that was probably Bigfoot screams.

I haven't been back there in years and it's right next to my dad's house. I've often thought, hey, maybe it lives back there... maybe it's still there. It's an old abandoned barn right there deep in the middle of the woods. So obviously this Bigfoot has killed people's cows in their fields and ate them. I mean, I don't know what the whole head ripping off thing is. I don't know if that's a thing or if anybody else is witnessed this, but it's pretty bizarre.”
Posted by arclein at 12:00 AM