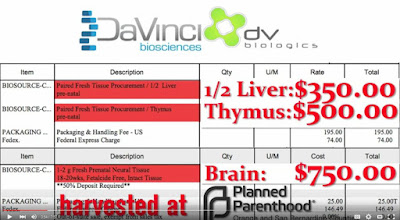 We were all blind. Now we need to rigorously address the whole ethical issue and bring it into compliance with what society desires.

Investigation is the first step.  Corrective legislation may be necessary.

This is really the unintended consequence of the whole abortion debate and we now see the whole subject coming back into the sphere of public debate.  Sadly none of this will be successfully resolved until we at least eliminate poverty with the natural community and the rule of twelve.

A natural community using shared facilities and with twenty aunties to share in child care creates real demand for baby's however engendered.  DNA testing confirms parenthood and financial responsibility as well.  No one has dared have that debate yet.  .


WASHINGTON – Following an investigation into the practice of fetal tissue transfers and the federal laws governing the practice, Senate Judiciary Committee Chairman Chuck Grassley is referring several Planned Parenthood affiliates and companies involved in fetal tissue transfers, as well as the Planned Parenthood Federation of America, to the FBI and the Department of Justice for investigation and possible prosecution.


“I don’t take lightly making a criminal referral. But, the seeming disregard for the law by these entities has been fueled by decades of utter failure by the Justice Department to enforce it,” Grassley said. “And, unless there is a renewed commitment by everyone involved against commercializing the trade in aborted fetal body parts for profit, then the problem is likely to continue.”


Grassley’s referral follows the completion of a Senate Judiciary Committee majority staff analysis of more than 20,000 pages of documents provided voluntarily by the organizations and companies involved. While the impetus for the investigation was the release of a series of videos regarding transfers of fetal tissue by the Center for Medical Progress, the committee’s analysis and findings are based strictly on the documents obtained independently from tissue procurement companies and Planned Parenthood.

• Despite the clear legislative history of the 1993 NIH Revitalization Act, the executive branch across multiple administrations has failed to enforce the law’s safeguards.


• Since 2010, three companies - Advanced Bioscience Resources, Inc.; StemExpress, LLC; and Novogenix Laboratories, LLC (Novogenix has since gone out of business) - have paid affiliates of Planned Parenthood Federation of America to acquire aborted fetuses, and then sold the fetal tissue to their respective customers at substantially higher prices than their documented costs.


• The Planned Parenthood Federation of America (PPFA) initially had a policy in place to ensure its affiliates were complying with the law, but the affiliates failed to follow its fetal tissue reimbursement policy. When PPFA learned in 2011 of this situation, PPFA cancelled the policy rather than exercise oversight to bring the affiliates back into compliance. Thus, PPFA not only turned a blind eye to the affiliates’ violations of its fetal tissue policy, but also altered its own oversight procedures enabling those affiliates’ practices to continue unimpeded.


• The cost analyses provided by affiliates of Planned Parenthood Federation of America lack sufficient documentation and rely on unreasonably broad and vague claims of costs for “the transportation, implantation, processing, preservation, quality control or storage of” fetal tissue. Planned Parenthood attorneys acknowledge that the affiliates had failed to follow procedures put in place to ensure compliance with the law. In addition, the cost analyses were only performed long after the fact and at the insistence of the committee.


The full report details the long history of the controversy surrounding human fetal tissue research and the bipartisan legislative approach taken to resolve the issue at the time, as well as the subsequent lack of enforcement. As the report explains, “Support for the 1993 NIH Revitalization Act was premised on the idea that the ban on buying or selling fetal tissue would be a safeguard against the development for a market for human fetuses. Tragically, the executive branch has either failed or simply refused to enforce that safeguard. As a result, contrary to the intent of the law, companies have charged thousands of dollars for specimens removed from a single aborted fetus; they have claimed the fees they charged only recovered acceptable costs when they had not, in fact, conducted any analysis of their costs when setting the fees; and their post hoc accounting rationalizations invoked indirect and tenuously-related costs in an attempt to justify their fees.”
Posted by arclein at 12:00 AM