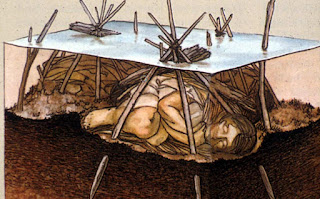 Windover is one of the oldest sites at 9000 years.  Most important though is that the DNA confirms that the population conformed to western Europe of the same era.  Thus we have traffic leading to the populating of the Americas originally coming from Europe.

A mid Atlantic ridge, a Grand Banks and a Bahama bank all above sea level could have made this work.  Throw in early sea navigation along the natural great circle route of the gulf stream and the European coast and it works.