The Calculation Flaw in Marx’s Socialism 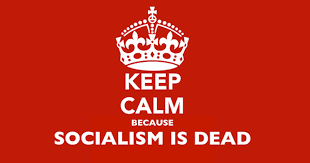 Quite simply, you cannot establish value without human participation through the creation of a market.  The leap forward was the creation of a common unit of trade, first with metal ingots and ultimately with paper currency.

Even that was not good enough and we discovered how to create credit and to manage it.  That began around two centuries ago and we are still learning.  It is very much a work in progress.

Sadly, the political attraction of socialism is that you can buy votes and power without creating wealth and that simply collapses as poverty naturally increases.

The Calculation Flaw in Marx’s Socialism

Mark my words: American leftists who are celebrating the 200th anniversary of Karl Marx’s birthday will not make any mention of the problem of economic calculation under socialism. The reason? The calculation problem reveals that socialism is an inherently flawed economic paradigm. It makes sense that American leftists would not want to talk about something that shows that the economic system they favor is fundamentally flawed.

Imagine a socialist society as envisioned by Marx. The state owns and produces everything. That is what is meant by the socialist term “public ownership of the means of production.” All the factories, the businesses, stores, and enterprises are owned and operated by the state. Everyone in society is a government employee.

As Austrian economists Ludwig von Mises and Friedrich Hayek demonstrated, it is impossible to answer these questions with any degree of rationality. The reason for that is because under socialism, there are no prices. Without prices, it is impossible to calculate the costs of projects or evaluate their worth.

The result is what Mises called “planned chaos.” That’s what socialism always and inevitably produces — chaos. Just look at Cuba, North Korea, Venezuela, and Nicaragua. Nothing but economic chaos in all of them.

In a private-property, free-market economy, people are free to enter into economic trades with one another. In every trade, a person gives up something he values less for something he values more. Such trades establishe prices for various items, based on the supply of items and the demand for them.

It’s all based on the relative value that people subjectively place on the thing they are purchasing and the item (e.g., money) that they are giving up.

Thus, in a free market, people have a way to calculate the costs of what they are purchasing. They know what they have to give up in order to get what they want. If they subjectively decide it’s worth it to them to make the trade, they’ll do it. If not, they will walk away. The price system enables them to make a rational calculation in terms of their own personal, subjective values.

But note something important: The reason that prices come into existence is because of trades between people. Without trades, there would be no prices and, therefore, no way to make rational economic calculations.

Under socialism, there are no trades that take place because there are no traders. Everything is owned by one entity — the state. The state can’t trade with itself. Since there are no trades, there are no prices. The state’s decision to produce and distribute items, such as sweaters, becomes an entirely arbitrary process. Government officials simply decree the production of sweaters based on their own feeling that people will buy them. They do the same thing with respect to quantity and colors. They allocate arbitrary amounts of resources to factories and stores that sell sweaters even though people might want something other than sweaters.

Since it revealed an inherent and critically important flaw in the socialist paradigm, the socialist calculation critique that Mises and Hayek leveled at socialism was devastating. It has gone down in history as the “Socialist Calculation Debate.” Socialists have never been able to refute the point that Mises and Hayek made, which is why you will not find any mention of it in any of the paeans that American leftists write today celebrating Marx’s birthday.

Jacob G. Hornberger is founder and president of The Future of Freedom Foundation. He was born and raised in Laredo, Texas, and received his B.A. in economics from Virginia Military Institute and his law degree from the University of Texas. He was a trial attorney for twelve years in Texas. He also was an adjunct professor at the University of Dallas, where he taught law and economics. In 1987, Mr. Hornberger left the practice of law to become director of programs at the Foundation for Economic Education. He has advanced freedom and free markets on talk-radio stations all across the country as well as on Fox News’ Neil Cavuto and Greta van Susteren shows and he appeared as a regular commentator on Judge Andrew Napolitano’s show Freedom Watch. View these interviews at LewRockwell.com and from Full Context. Send him email.
Posted by arclein at 12:00 AM