It is interesting that jade was used both sides of the Atlantic during the time periods involved as was actual trade.  Yet it surely was a luxury item only.  What we do have here is massive confirmation that stone axes were heavily used.
That also makes sense since it is easy to get an edge on most crystalline rocks and using that to cut wood is simple enough.  Recall that we also produced sickles as well and that is not nearly so easy or obvious.
Jade was a sale of craftsmanship mostly.  I could make a brass sword or bronze sword, but i would never really test it..
.
Secrets of Stone Age Jade Axes Revealed in Scotland

A new exhibition at the National Museum of Scotland showcases a rarely seen collection of Stone Age jade axeheads. Most of them were brought to Scotland around 4,000 years BC. In those times they were at least 100 years old.

The display that opened on May 20 contains a collection of jade axeheads which were created over 6,000 years ago. The artifacts were made in the Italian Alps, far from Scotland. The axeheads were brought to Scotland by pioneering farming groups from the northern region of France. The history of the axeheads was discovered by a French-led group of researchers involved in National Museums Scotland ''Projet [Project] Jade''.


Dr. Alison Sheridan, Principal Curator of Early Prehistory in the Department of Scottish History and Archaeology, said that the Museum hopes to ''inspire and fascinate'' modern people with the unique history of the ''extraordinary jade axeheads''.

The jade axes are polished and it would have taken many hours to make one. They were probably used as ritual or ceremonial objects; however these artifacts were important for the expansion of a civilization as well. The polished stone axes transformed society after the Ice Age. They allowed people to clear space in forests and plant crops more effectively than ever before. However, it is unlikely that the jade axes were used to cut large quantities of wood.

Moreover, the researchers have argued that the axes were status symbols - a luxurious confirmation of the power and prestige of the owner. Jade is not found in Britain, the rock comes from Mont Viso, located south-west of Turin and Mont Beigua above Geona in Italy.


Apart from the jadeitite, omphacitite, nephrite, and eclogite stones were also discovered. However, for many decades archaeologists used the term ''jade'' for all of them. The axeheads were made near high mountains. People who made these axeheads climbed to heights of over 2,000 meters (6561.68 ft.) in the Italian Alps.

Block of raw jadeitite from the Oncino valley with Mont Viso in the background. ( Projet Jade )

According to the researchers, the people who lived there during the Neolithic period associated mountains with the realm of the gods. The Neolithic people probably also believed that pieces of the mountains had powers which could heal and protect.

Jade axeheads are in collections of some other museums as well. According to Gillian Varndell , Curator of the British Museum (which owns a jade axehead discovered in Canterbury):

''The axe has been a powerful symbol for thousands of years in many parts of the world. It means different things to different societies. To the early farmers the everyday working axehead was an essential tool for clearing land for cultivation. Objects like the Canterbury jade axehead, however, were not used for farming, they were symbols of status. Ownership of one was undoubtedly restricted. The green color of jade might itself have been significant, as copies were made using local greenish rock. More than a hundred axeheads made from jade have been found in Britain and Ireland. Most of them have been accidental and isolated, so there is no sense of a pattern.''

Nowadays, over 1,600 large axeheads made from jadeitite, omphacitite, nephrite, and eclogite are known in Europe. Excavations in Ireland suggest that they are not very popular artifacts. There, only four out of over 21,000 stone axeheads were found to be made of jadeite.

Archaeologists began to analyze the jade axeheads for the first time in the 1940s. They examined the stone axes of the South-Western Group of Museums. In the 1960 and 1970s, a few researchers tried to explore the secrets of the jade axeheads , but the real progress in researching the origins of these artifacts was made Pierre and Anne-Marie Pétrequin, with their team known as Projet Jade.

They have taken a Europe-wide approach, locating axehead sources high in the mountains of northern Italy. On Monte Viso they discovered the quarries dated back to 5,200 BC. When people brought the jade axes to Brittany, they started to copy them in local fibrolite. In Ireland, copies were made in local stone sources too.

The rituals and ceremonies connected with the jade axeheads are still unknown. The team of researchers hopes that future work will bring about more information on this area. 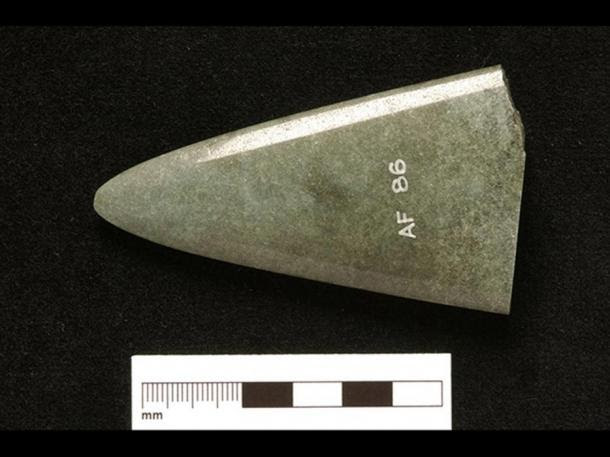 Fragment of deliberately-broken axehead, found near Douglas Castle, South Lanarkshire. The straight line along the bottom is due to the removal of a slice to make a petrological thin section during the 1960s. (National Museum of Scotland )

By Natalia Klimczak
Posted by arclein at 12:00 AM